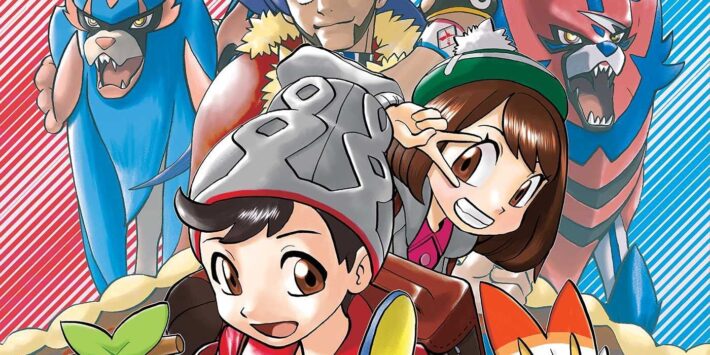 While there are plenty of video games based upon anime and manga, it’s not often that a manga springs forth from a video game. It’s even rarer still for the manga to capture the same sentiment and story of the video game. It’s one thing to take conflicts from a manga and “gamify” it, but it’s quite another to take the combat of a video game, especially a game focused on turn-based combat, and turn it into something easy to follow on page. Or for it to even translate well to a page. Pokémon: Sword and Shield manga does manage to make sense of sorts the odd rules of playing a Pokémon title, and it is rather cute to boot. However, it takes the typical story of a Pokémon game and turns it on its ear.

In nearly every Pokémon entry, the protagonist is the player-controlled new kid in town. The story often starts the same way each time, with a new family moving to a small town, the kid in the family befriending the neighbors, and the neighbor kids forcing the new kid to go on a Pokémon journey. Pokémon Sword and Shield differed oh-so-slightly in that the player-controlled protagonist had lived in the town for a while. She was still super close to the neighbor kid and the two ran off together on a journey to defeat the neighbor’s older brother in the Championship.

In the manga, however, the new kid is not the future Pokémon Champion of this story. At least it doesn’t appear that way so far. Instead, his new best friends, Henry Sword and Casey Shield (super subtle, there) are tagged by Champion Leon to challenge Pokémon Gyms. The new kid (Marvin), as a result, is just along for the ride. He doesn’t even have his own Pokémon in this first volume of the manga.

It’s a slightly different twist to the usual way of doing things, which is only compounded by the fact that Henry and Casey aren’t your normal ten-year-olds heading out on a Pokémon journey. They’re actually research assistants to Professor Magnolia. Henry develops and improves gear for Pokémon, such as Sir Fetch’d’s scallion sword. Casey researches mostly technology, and she’s most proud of her VR system she has for would-be trainers to battle with. Both are helping Professor Magnolia on her Gigantamax research.

The volume ends after Leon has extended invitations to Henry and Casey, and before they head off to their first gym battle. It’s a nice setup for how the series will progress, and these first four issues in the volume provide plenty of context for readers deciding whether or not they will continue.

While the Pokémon: Sword and Shield manga is super cute, it has as much depth as, well, a typical Pokémon game. It was definitely constructed with kids in mind, most likely adolescents as it’s probably too much for young kids. My thirteen-year-old and seven-year-old, who are both obsessed with all things Pokémon, did enjoy this first volume. That said, though, the eldest said he wasn’t sure he’d want to read the rest since he already knows how the story goes. This is typically the case (and downfall) when it comes to manga based upon video games, but at the same time, I can’t help but be curious as to what other twists the overall story will contain.

Pokémon: Sword and Shield vol. 1 is available in English from Viz Media now.