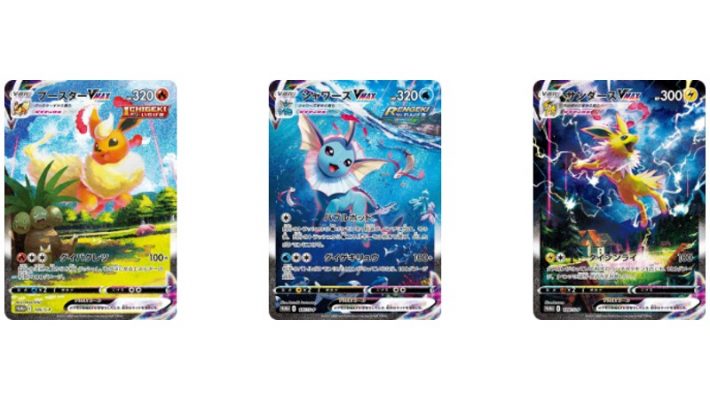 The Pokemon Company will hold a special Pokemon Trading Card Game lottery in Japan. It will reward 3,000 lucky winners with promotional Pokemon TCG VMAX cards of Flareon, Vaporeon, and Jolteon. The lottery will run from July 21, 2021 to September 30, 2021. After deciding the winners, the company will deliver the card sets in late October 2021.

To register for the lottery, you must register an account on the Japanese Pokemon Card Game Players Club with a valid name, address, and contact details. You will then have to play a match with a friend or family member by either purchasing a starter deck or constructing your own deck. The lottery application page will require not only your deck code but also the rules used in the match.

The lottery will only allow a person to make a single entry. Those found using fake credentials and multiple accounts will have all of their entries nullified and also be banned from official Pokemon TCG tournaments.

A lucky person residing in Japan can also win all three Pokemon TCG VMAX cards by watching an official live stream on Friday, July 9, 2021. Other than tweeting the correct answer to the stream’s quiz, they must also follow the stream hosts’ Twitter accounts to be eligible for the early prize set.

The latest Pokemon Trading Card Game to date is Chilling Reign, which came out in June 2021. The next expansion, Celebrations, will be available on October 8, 2021, to mark the Pokemon franchise’s 25th anniversary.