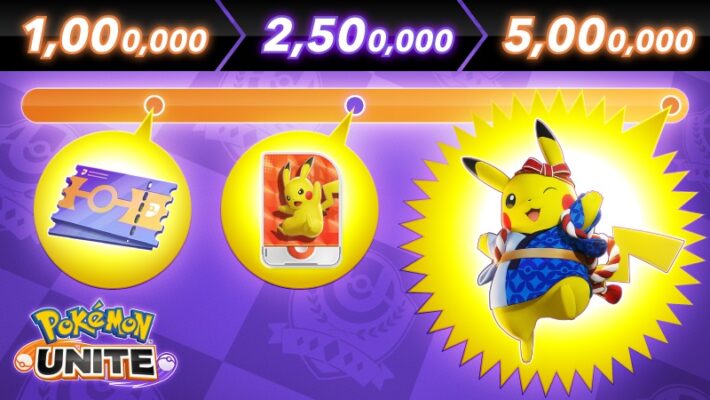 Over five million people signed up to play Pokemon Unite on mobile devices. That means all three of the pre-registration reward tiers have been hit. So, everyone who spends some time with the mobile version of Pokemon Unite will also get Festival Pikachu Holowear for the character to wear in-game.

The event’s tiers were fairly simple. The first milestone said people would get 1,000 Aeos Tickets in-game if one million people signed up. The 2,500,000 hallmark meant everyone would get a Pikachu License. (Or, if you already had Pikachu, in-game coins.) Now that the five million mark’s been hit, people will have the optional customization item to dress Pikachu up in a Festival outfit.

As a reminder, Switch owners who wish to claim the Pokemon Unite mobile rewards like the Pikachu License, Aeos Tickets, and Festival Pikachu Holowear will need to link their account to a Nintendo or Pokemon Trainer Club account. Once you do, download the Android or iOS version of Pokemon Unite when it is available. Then, link your data and go through the launch events to get the three rewards. They will then be available in every version of the game you have your account connected to.

Pokemon Unite will come to Android and Apple iOS devices on September 22, 2021. It is immediately available on the Nintendo Switch. The mobile pre-registration rewards like the Pikachu license and Festival Holowear will be available to claim until October 31, 2021.