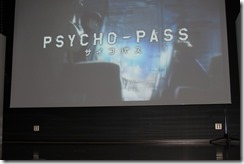 Mages also announced a video game based on the anime series Psycho-Pass that is in development for Xbox One. The Psycho-Pass game will have an original story and a new protagonists. Gen Urobuchi, the original creator is supervising the story, while Nitroplus is preparing it.

Psycho-Pass for Xbox One will utilize the Kinect sensor and will connect to a smartphone, but details on how the game will do this were not revealed.