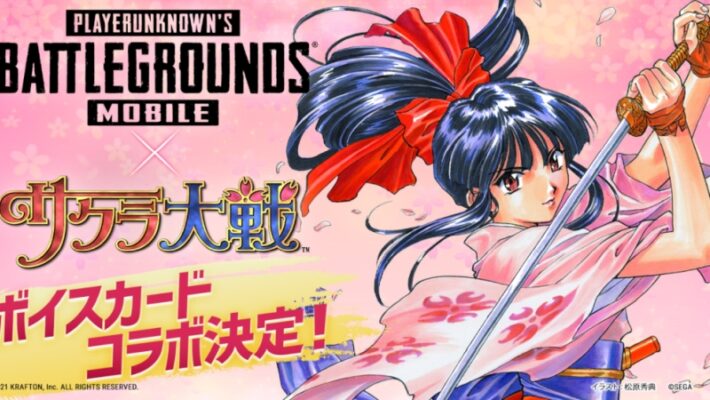 An unexpected set of guests is dropping over Murder Island: The Imperial Combat Revue. PUBG Mobile, the mobile version of multiplayer battle royale shooter PlayerUnknown’s Battlegrounds, will kick off a crossover with Sega’s Sakura Wars franchise in Japan. The announcement was made via the game’s official Japanese Twitter account.

The banner featured some art of Sakura Wars heroine Sakura Shinguji, hinting that the PUBG Mobile crossover would be based on the original Sakura Wars games, rather than the newer members appearing in Sakura Wars V or the 2019/2020 Sakura Wars sequel/reboot. The text also indicated that the content would include (or consist of) “Voice Cards”.

A trailer was also linked in the tweet, and featured voice actress Chisa Yokoyama reprising her role as Sakura and narrating the chaotic opening moments of a PUBG Mobile match. The trailer also features the Sakura Wars opening theme, as well as visual elements mimicking the series’ “Next Episode” preview segments.

Voice cards are downloadable content packs included in PUBG Mobile‘s loot box-style gacha system. Obtaining a voice card allows players to use voice clips in quick chat, not unlike “voice pack” content sold in other games such as Call of Duty or Dota 2. In 2020 a Voice Card based on celebrity Gackt was added to the game.

One Twitter user,  @R_020115, posted what looked to be a screenshot (or a mockup) of Sakura Wars character voice packs in the game, allegedly leaked from PUBG Mobile‘s beta server.

PUBG Mobile is immediately available on iOS and Android, and Sakura Wars is available on PS4. A starting date for the Sakura Wars crossover was not revealed, nor was it confirmed if the content would be made available outside Japan.