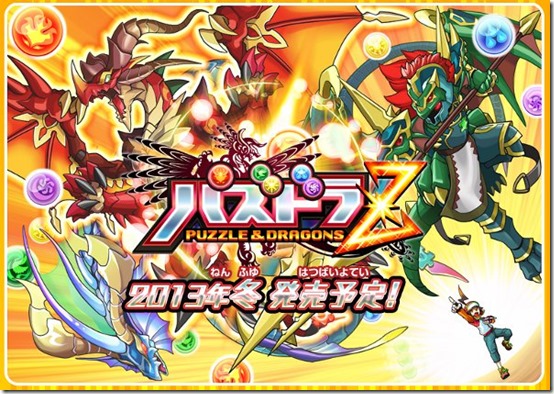 Puzzle & Dragons Z is based on GungHo Online Entertainment’s popular social game, Puzzle & Dragons, with the addition of new RPG elements for Nintendo 3DS. According to this week’s Famitsu issue, the game will be getting rid of several freemium features from the mobile version of the game, and will include more RPG elements such as fields to explore.

In Puzzle & Dragons for mobile devices, there’s an item called Magic Stones that give you a chance to acquire rare monsters and recover your stamina to continue playing, in exchange for cash. Puzzle & Dragons Z will be getting rid of this, along with the team cost feature that limited what kind of monsters you could have in your party.

About 70% – 80% of the monsters in the 3DS version will be new to the series, in addition to the fields and NPCs who will be providing hints and striking up conversation like in most RPGs. Developer GungHo will also be including a level up system, which follows a more traditional RPG method of gathering experience points by defeating enemies.

As seen in our earlier report, there will be a monster evolving feature to the game, too. Evolving monsters will require the use of “Chips,” which will also have various patterns in the evolution process.

Puzzle & Dragons Z will also allow you to trade monsters with your friends in addition to character cards that have all of your player data. There will also be a friend registration system, where your friend’s leader monster can appear as a helper in your battles.

Puzzle & Dragons Z is slated to be released this winter for Nintendo 3DS. GungHo have plans to release the game in the west, but haven’t announced just when they will do so.