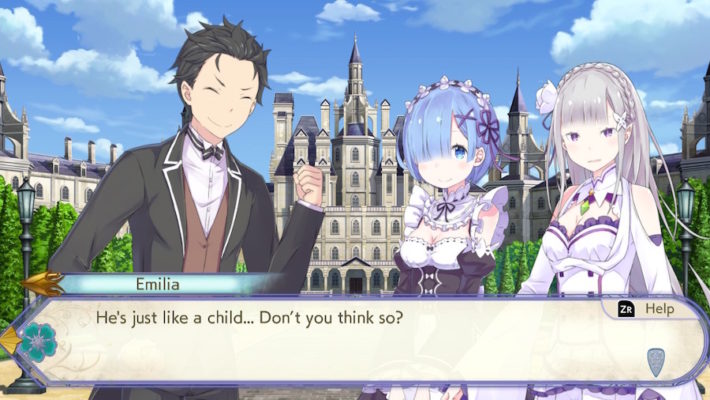 Re:Zero — Starting Life in Another World: The Prophecy of the Throne is the latest entry in the Re:Zero franchise, and it leans on much of the lore established in Re:Zero’s medium-spanning isekai narrative. Despite its wholly original story, it is clear from the outset that you are not starting anywhere near the beginning of the main character’s arc. By the point The Prophecy of the Thrones begins, the protagonist, Subaru, has already lived in the game’s fantasy world for around a month, meaning he doesn’t necessarily possess the audience-mirroring naivete commonly portrayed within the genre. Fortunately, Subaru is a nigh incurable fool, so it is entirely possible to play through the game without feeling more lost or confused than he is. This aspect of his personality is crucial to the game, and its importance is reflected in both its story and gameplay. The execution is admirable and results in an approachable introduction to a complex world, rather than the inhospitable entry point that I feared it would be.

Subaru’s ignorance and tendency to make mistakes, some of which are fatal, are the primary space for his character to grow. It’s a natural fit, too, because information is something that both Subaru and the player lack. This need for knowledge is a main material of an overarching dramatic question that works to support the intrigue of the game’s central narrative.

This narrative truly begins with the reveal that the king and his family have succumbed to an unspecified plague. While that is tragic in its own right, their sudden deaths imperil the Covenant of Dragon King Lugunica, which has been an important measure of protection for the kingdom over recent centuries. This covenant, in simplest terms, is an arrangement with a dragon who has helped the kingdom’s inhabitants survive multiple crises since its formation, and its preservation requires that a priestess from a royal family perform something called the Dragonfriend Ceremony. Traditionally, this priestess would be selected from a group of five candidates who have been certified by a Dragon Gem. This time around, however, there are six candidates and each of them appear to be certified. One of these candidates is a silver-haired woman named Emilia, to whom Subaru is fiercely loyal. He’s also aggressively in love with her. Unfortunately, she bears a resemblance to an infamous witch, so she is the one who is initially subjected to suspicion when concerns of an imposter among the six potential priestesses first arise. Clearing her name becomes Subaru’s first clear goal. 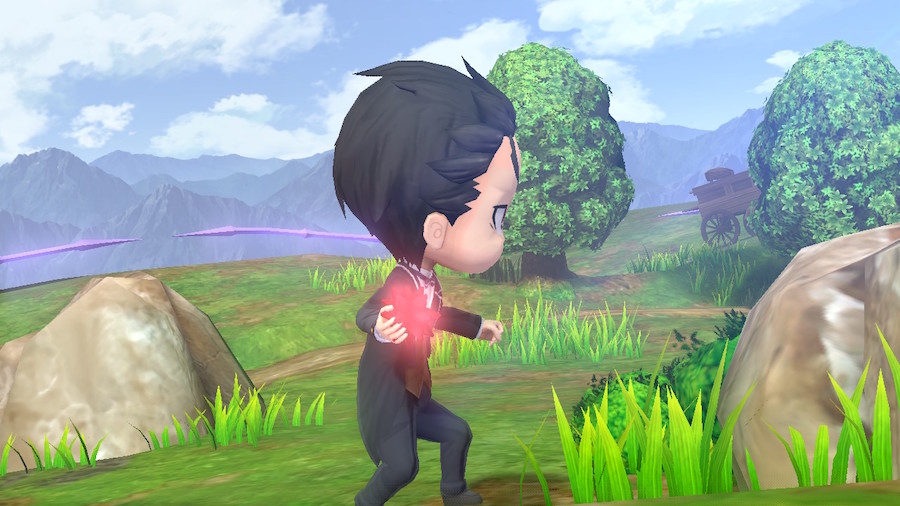 Most characters in the story are modeled after your typical anime archetypes, but it’s worth noting that they remain distinct within the confines of whatever box you might choose to cram them. And while archetypal, they are far from flat, stock characters, each possessing a perspective and insight that provides a three-dimensional value. Because Subaru is who he is, he opens up a lot of opportunities for them to offer their wisdom too, which means lectures can occur comically and without feeling as though they were shoehorned in. Their liveliness helps enliven the world, as well. Further assisting their characterization is the initial element of mystery, which might inspire a feeling of suspicion in the player and from that might arise a critical inspection of recurring characters. That was my experience for the moments immediately following the aforementioned scene, anyhow.

Learning about the world isn’t just a matter of acquiring knowledge that will inform or enhance the story. Long sections of text are broken up with interspersed dialogue options that the player can choose from. This is one of the first direct methods through which the developers engage the player. It also employs methods that deviate from visual novel norms. In addition to providing entertaining breaks from a steady diet of text, these other phases of the game make it easier to focus for long periods by offering information across multiple channels.

One such phase of play comes in the form of movement sections. In these moments, the player takes direct control of Subaru as he explores the environment. By talking to NPCs and examining locations, the player can gather information and items that can help them in the briefing and mission phases. 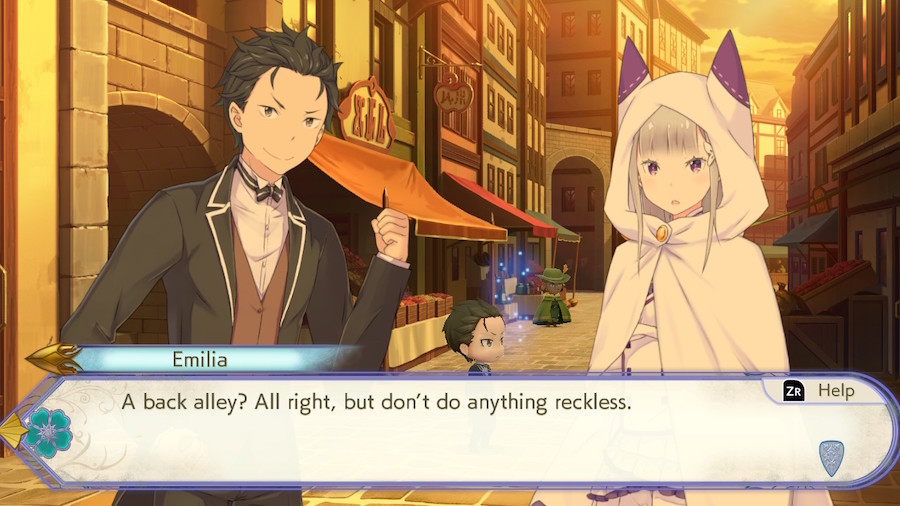 Briefings occur before Re:Zero — The Prophecy of the Throne’s missions. During a briefing, the player can piece together knowledge they’ve acquired to formulate a strategy to use in the more conflict-laden mission phase. Some strategies won’t be available if players didn’t explore thoroughly enough and, in some cases, Subaru won’t be able to offer anything of strategic value whatsoever. This reflects pretty badly on him, because Subaru isn’t seen as all that useful a resource in the missions themselves. A lack of choices is further complicated by the fact that Subaru is the only character you can directly control during missions.

Once a mission begins, every character on the field is assigned to a turn order. A meter diminishes as Subaru moves or takes actions through his turn. It’s pretty easy to waste this resource, which helps convey the urgent need to make informed decisions. It would be nice, given the limited movement, if it was possible to move the camera and fully examine the battlefield during these missions. The lack of access to visual information isn’t particularly stressful due to Subaru’s secret Death by Return ability, which allows him to return to a previous point in recent history after he dies. This will happen a fair amount, too, and it complements the game’s theme of making mistakes and getting better.  Each time Subaru fails, he and the player, are better positioned to overcome a challenge. The missions are dynamic, since new information changes the game’s state and the player’s goals substantially. Knowledge gained from returning to an earlier point in time after a death makes second attempts more interesting. Subaru’s ability to find a silver lining in dying presents a bit of appreciable irony too, as reliving situations multiple times sometimes allows him to know things that he otherwise wouldn’t be expected to know. 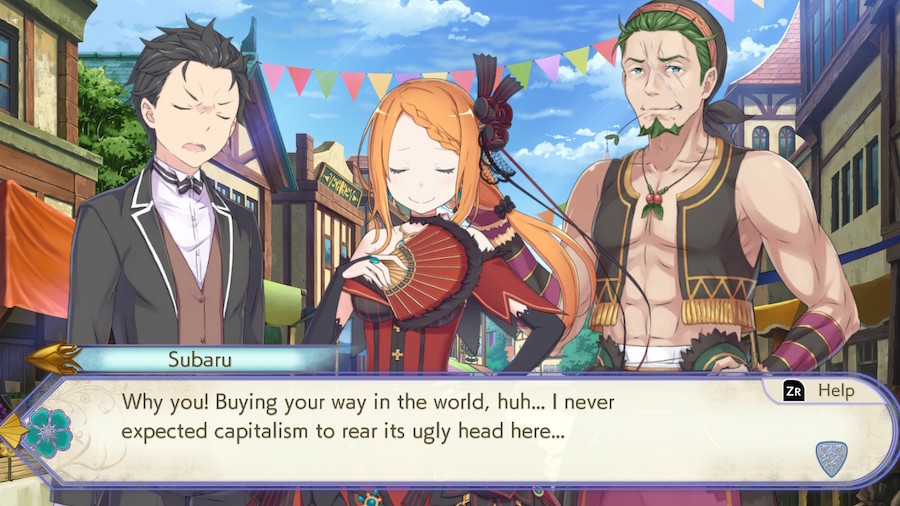 Each phase, combined with the shifting dynamics in missions, keeps Re:Zero — The Prophecy of the Throne varied. That makes it very binge-able, which isn’t always easy when it comes to experiences that rely heavily on reading. The way these segments are managed affect pacing in a mostly positive way, although there will be some stretches of story that are hardly even broken up by dialogue options. If somebody wanted to, they could skip these text-heavy sections, but they would risk more than just having a negative effect on the pacing. Without engaging in the other parts of the game, and opting into the pursuit of knowledge, the mission segments are unlikely to have much merit. Rushing comes at the expense of tactical options.

There’s something to be appreciated about the longer stretches of text too, because they are demonstrative of an aspect of storytelling that is specific to gaming. Because this isn’t concerned with constraints around runtime or page count, the developer can introduce some meandering, world-deepening, character-defining dialogue that aren’t charged with furthering the plot. The comic beats strewn throughout have room to breathe in the relaxed plot, and these moments might have been harder to appreciate if there was a sense that the story was in a hurry to get somewhere. That would have been, on a personal level, all the more true if I was in a hurry to get to the game’s missions. As wonderful as they are in their ability to distinguish Re:Zero — Starting Life in Another World: The Prophecy of the Throne from games resembling it, they are supplemental and not in any way the star of the show.

That honor belongs to the characters, world, and the charismatic writing in Re:Zero — Starting Life in Another World: The Prophecy of the Throne. The world is vivid, and the density of details is on scale with the sort of thing you might find hidden in flavor text or within a franchise’s extended universe, rather than its core content. Despite this, it’s approachable, and the incentive to gather and implement information emphasizes the importance of details which can sometimes be considered tools rather than trivia. It’s  hard to say that the story would work in another medium, but as a game, it is exemplary of the genre’s potential and might even make a case for an alternative to traditional reading for people who struggle in maintaining focus.

Re:Zero — Starting Life in Another World: The Prophecy of the Throne will release in North America on the Playstation 4, Nintendo Switch and PC via Steam on January 29, 2021. It will then release in Europe on February 5, 2021.

Re: Zero — Starting Life in Another World: The Prophecy of the Throne