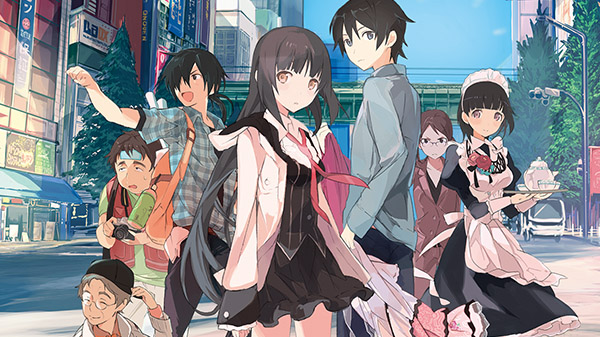 There are reasons people might be happy about Akiba’s Trip: Hellbound & Debriefed. It’s a win for folks who enjoy the series, as they’ll finally get to play the one that started it all. Those who appreciate obscure games getting a release outside of Japan might be pleased to see it show up worldwide. Not to mention it helps with game preservation efforts, as this is a PlayStation Portable title being “rescued.” I’m glad people who want it have a chance to play it. But it’s a big step back from Akiba’s Trip: Undead & Undressed and incredibly frustrating.

Akiba’s Trip: Hellbound & Debriefed begins with the player, who we’ll refer to by the default name Nanashi, nearly dying. He and his friend are accosted by a Shadow Soul named Yu while patrolling the city with an amateur group trying to protect civilians. Fortunately, another Shadow Soul named Rui essentially turns you. After she does, an organization attempting to stop these “vampires” named NIRO captures you. You’re forced to aid NIRO’s cause (at least temporarily) to get back onto the streets of Akihabara. From there, you’ll fight Shadow Souls and strip off their clothes to expose them to sun, rip clothes off of normal people for fun and profit, and eventually choose whose side you’ll be on. Will you stick with NIRO? Or will you stand alongside Rui? 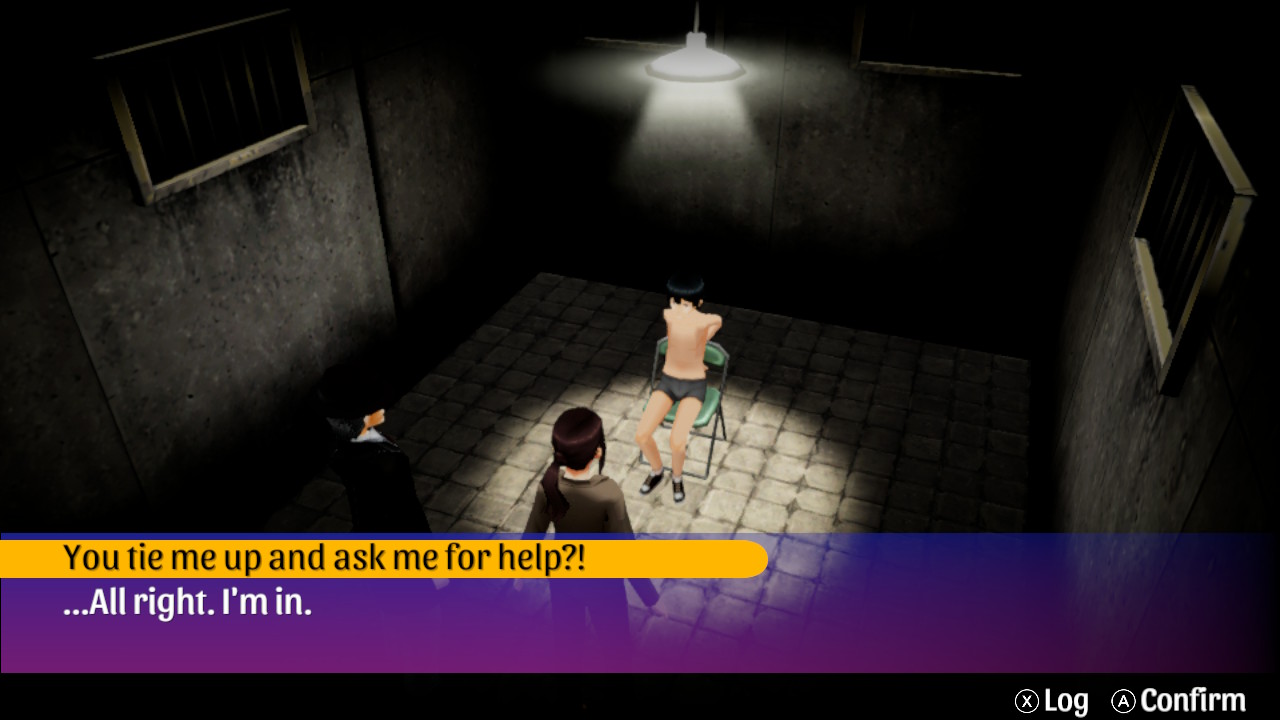 It’s this setup that offers the first hint that Akiba’s Trip: Hellbound & Debriefed won’t live up to Akiba’s Trip: Undead & Undressed. Certain characters lack the same attention here as people did in the successor. In many ways, it feels like a prototype for its more fleshed out successor. Each begins with a convenient excuse for your avatar to be accosted and turned into a Shadow Soul/Synthister. The Akiba Freedom Fighters are a group, though not the same group, in each entry. There’s a cute girl involved in your salvation every time. But in the predecessor, I found it hard to care about most of the characters. For me, Mido and Rui are the only ones who felt like they had any weight to them. Even then, I feel like I had more fun playing through Shizuku’s route years ago.

But it isn’t the only time that you’re reminded that this installment is not only a first attempt, but the sort of game where a developer is doing the best they can with an outdated title. Akiba’s Trip: Hellbound & Debriefed is, for all intents and purposes, still a PSP game. That means it is bound by its limitations, even if you are playing it on a more modern console. You don’t have a seamless Akihabara to explore. You get small districts. And by small, I mean the first hour or so, you might unintentionally leave areas often because you won’t realize, “Oh, right, that’s the end of this space.” You can’t change equipment or save unless you get to the map screen–that is leaving the location you’re in. Underwhelming is a good word for it. 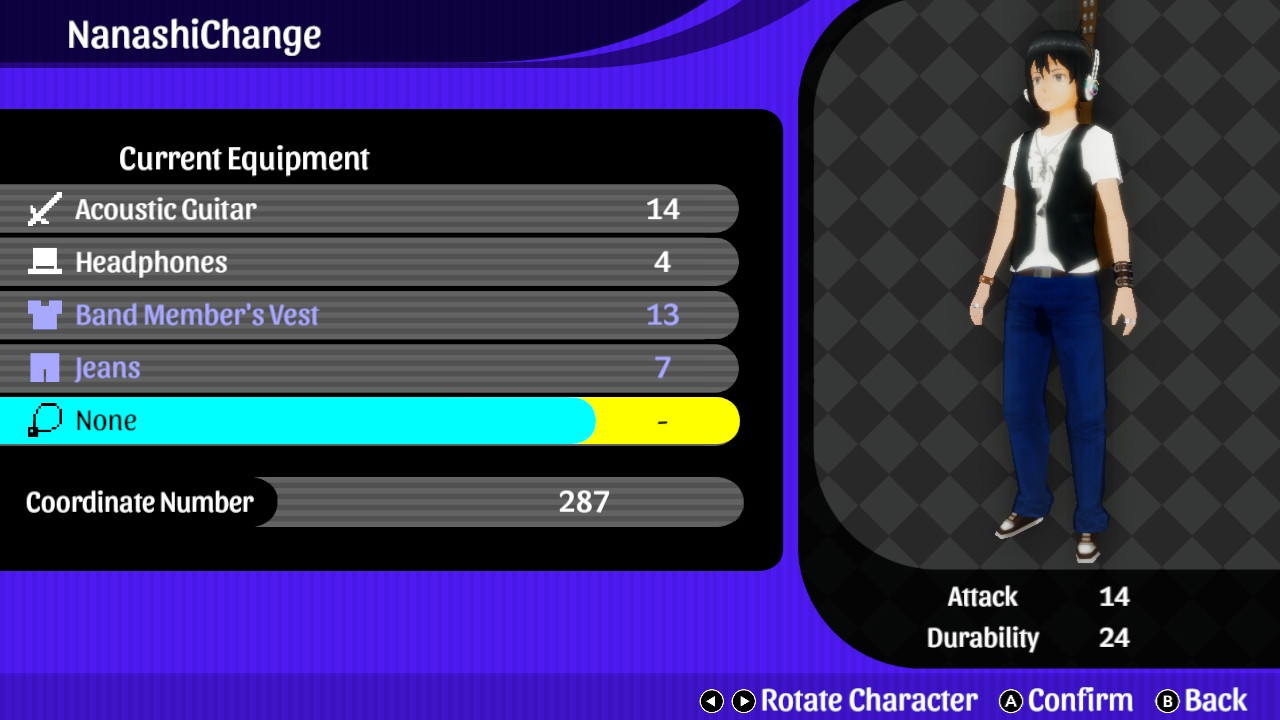 So is unintuitive. Let’s go over the first major quest line, both for the sake of avoiding spoilers and showing things are frustrating from the very beginning. You need to fight Shadow Souls dressed as band members, as they’re Yu’s minions. Well, they might not always be in the two areas they are supposed to be, even though the in-game To-Do list and email say you can find them there. This means entering and exiting, say, SW Main Street until they show up. The game will suggest using Mirror Snap, where you pull up your camera to see if any people around are Shadow Souls. But if that person is close to an edge of the space you’re in, they will walk out and leave before you can reach them.

The game also doesn’t tell you that you’ll need to buy a book from the bookstore near the station to have a chance of stealing their clothing. Which you’ll need, because the next phase of the quest involves dressing yourself as one of the band members to lure Yu out in UD+. Except even when you do get the headphones and band member’s vest that disguise you—maybe throwing in an acoustic guitar for good measure—Yu might not show up right away. (This happened to me.) Which means, you guessed it, exiting and entering. I understand why this can happen, since the original game had its limitations, but it is still frustrating. 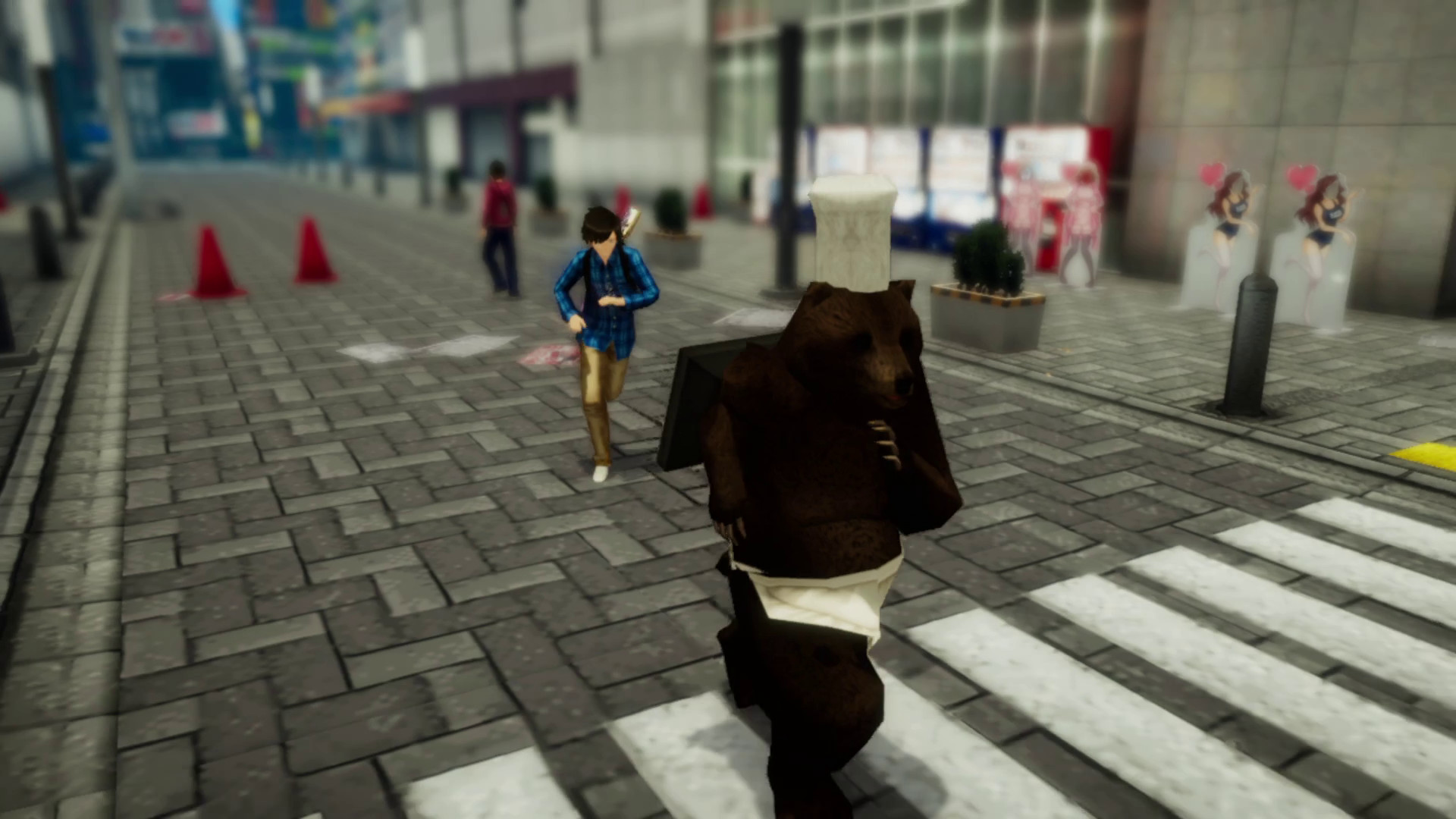 Many of Akiba’s Trip: Hellbound & Debriefed’s activities and adventures are there to provide excuses for you to beat up and strip people, then dress yourself up in silly ways. It generally works, though this is again a situation where people who played Akiba’s Trip: Undead & Undressed may miss always having an ally around. You go into fights and target different parts of the opponent’s body with attacks, occasionally getting into tug-of-war contests with them over clothing. If you are fighting a group and are distributing damage equally to foes, you can trigger a stripping combo and rip items off both people in succession. Start a fight in front of a cop, and the officer will deal an incredible amount of damage to you when beating you down. Make a name for yourself, and Shadow Souls might come at you while you attack. (Which is so much easier than trying to use the Mirror Snap camera app to get a picture, find the hidden vampire, and reach them before they walk off-screen.)

There are downsides to this, of course. While it could be entertaining, you’re fighting against the odds. Some areas, like UD+, tend to have a cop around. You don’t want that kind of outside interference. You pretty much need to find and buy certain books to successfully swipe certain sorts of clothing. Also, the camera is your worst enemy. It will work against you as you fight, forcing you to spend time arranging it so you can actually see the stripping prompts when they appear. Considering those can show up briefly, it’s easy for it to mess up your attack pattern and groove. 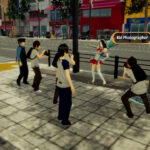 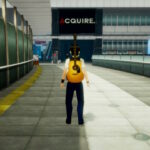 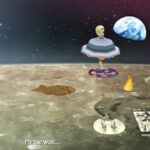 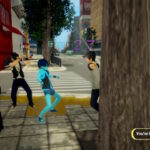 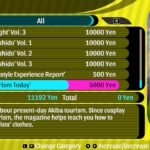 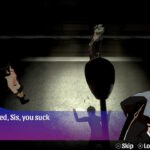 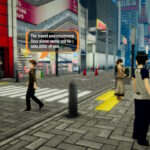 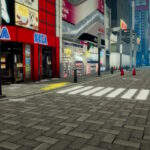 Speaking of the camera, it also wasn’t my friend when getting into conversations with NPCs. More than once, when trying to talk with someone, the person just… kept walking. They’d saunter away, with the camera following them. Until they’d reach a point where they’d be out of the shot, perhaps out of the area completely. So all I’d see is a floating text box and be unable to move until the conversation ended. It’s annoying, to be certain. Especially if, prior to that battle, you spent a lot of time trying to trigger the appearance of someone you needed to fight for a particular quest.

All of these are understandable flaws. As is the biggest one in Akiba’s Trip: Hellbound & Debriefed. This is the least impressive HD release of a game I have ever played on the Switch. I get and understand why. There is only so much you can do for a PSP game. You’re dealing with all sorts of limitations. That means not only technically, but visually. Its character models look terrible, the textures look bad, and everything is blurry. It looks even worse during story segments, as you have crisp, sharp character portraits with an unintentional bokeh effect on everything behind it. 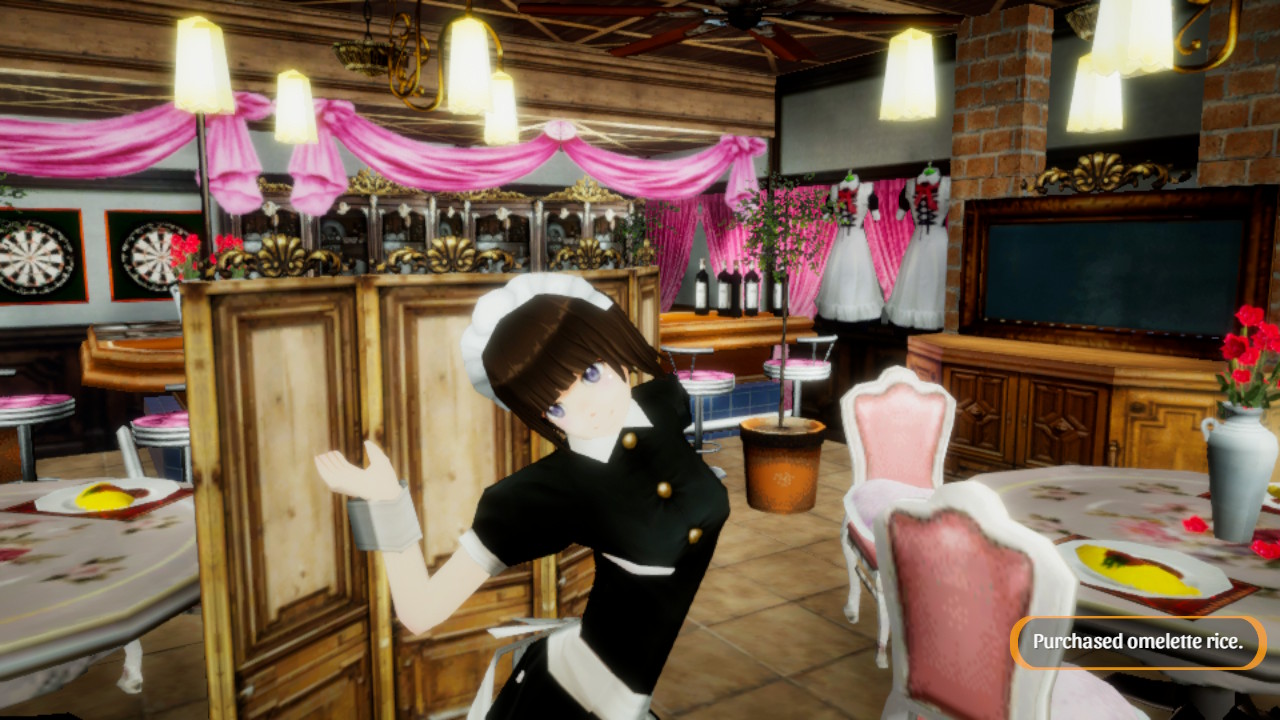 Akiba’s Trip: Hellbound & Debriefed is far from perfect. It doesn’t look great and you’re constantly running into annoyances that result from bringing a budget PSP game in 2021. But I suspect that the people who might pick it up will be willing to overlook that. This is about completing a set and seeing the inspiration for other titles. If anyone would want to experience this particular series at its best, I’d point them to Akiba’s Trip: Undead & Undressed in a heartbeat. But this release, flawed as it is, does give people who enjoy the series a way to see how it all started.

Supernatural creatures are stalking the pop culture mecca of Akihabara—and they've turned you into one of them. Arm yourself with an otaku-themed weapon and expose their skin to sunlight in this HD update of the first game in the AKIBA'S TRIP series. Switch version reviewed.
4