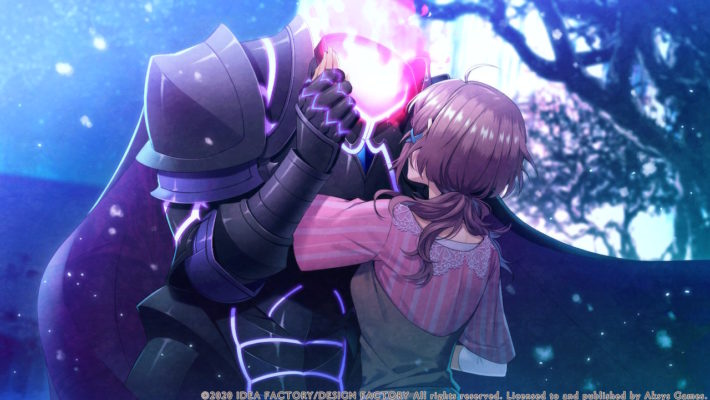 When it comes to otome visual novels, you can clearly see who target audiences are and they honestly aren’t great at transcending barriers. Its rare for one to tell a story and have a cast that might genuinely appeal to everyone. Cafe Enchante is one of those rare sorts of games. Its refreshing and wholesome, actually spends time on world-building and every person in its cast is a genuinely interesting being.

Cafe Enchante begins with our heroine in a situation that, frankly, is pretty identifiable. She works long hours at a company that doesn’t appreciate her. She has an escape, though. Upon his death, her grandfather passed down his coffee shop, the titular Cafe Enchante. She embraces the opportunity, only to discover that its primary clientele are otherworldly beings. Namely, a demon lord named Misyr, a dullahan called Canus, a fallen angel named Il and a demon beast named Ignis. What follows is a story looking at their backgrounds and lives, how the government handles gates where otherworldly beings can enter our realm, learning to run a business and falling in love. 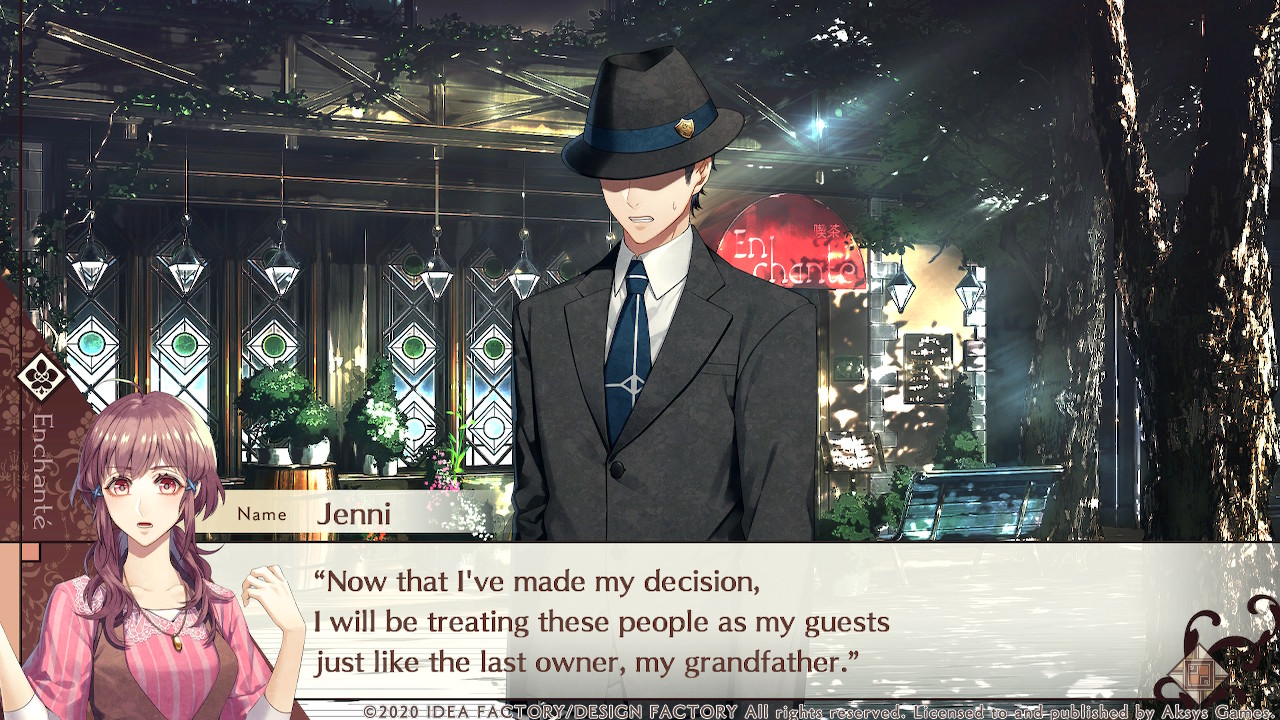 What’s striking, to start, is the detail Cafe Enchante pays to the the cast as a whole. This is one of those visual novels where you have a rather substantial common route that eventually branches off into the other characters’ storylines. I’m typically not a fan of these segments, but this is a game that handles the concept perfectly. It’s used to establish ambiance and a dynamic with the cast. We see Kotone settle in and adjust to not only life with being beyond her comprehension, but suddenly becoming a coffee shop owner. We see how these four men, who have been friends for years, interact with one another and the government agent who essentially keeps an eye on the group.

More importantly, it helps provide groundwork for the adventures Kotone and one of the bachelors will have in their romantic route. There are a few “field trips,” some into a few of the bachelors’ home realms, to provide insight into races like the beasts and fairies. We get to see platonic outings involving Kotone spending time with people one-on-one. There’s a foundation that’s built that introduces the supporting cast and concepts that will matter when things get more dramatic and romantic. 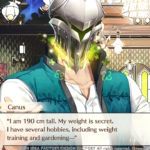 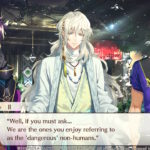 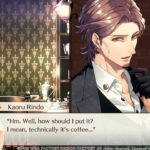 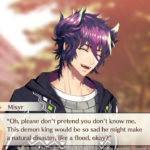 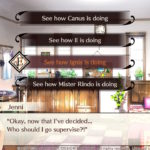 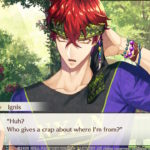 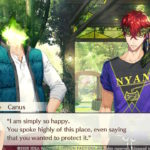 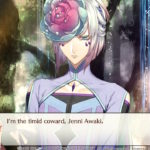 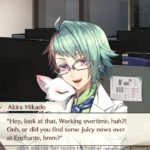 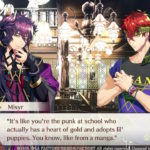 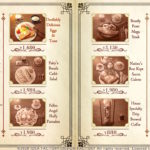 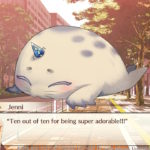 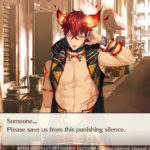 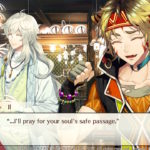 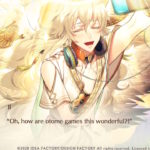 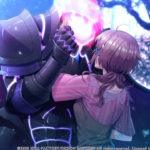 Which is another reason why Cafe Enchante works so well as not only a visual novel for the otome fans, but for a wider gaming audience. It covers so many bases. Shortly after Kotone comes to Cafe Enchante, there’s a situation where some rogue government agents come to deal with the gate and the supernatural “threats.” The result is an action-packed segment that, at the same time, has quite a bit of levity. The characters’ banter is amazing, at times both comedic and touching. You can tell everyone genuinely cares about one another, even when giving each other hell. There are political concerns and life-and-death moments which I don’t want to spoil.

It’s stylish too! The character designs are great and, even in their human forms, the supernatural characters have these tells. (Though, in the case of Canus, it is always incredibly obvious.) The event scenes are lavish and do a job of capturing all sorts emotions and moments. The soundtrack is refreshing, with music that covers any situation and region. It gels together so wonderfully, resulting in this cohesive experience. It even manages to have a font that is not only easy to read, but is unique. Also, I adore the UI and how menus call to mind actual cafe menus. It commits to its theme. 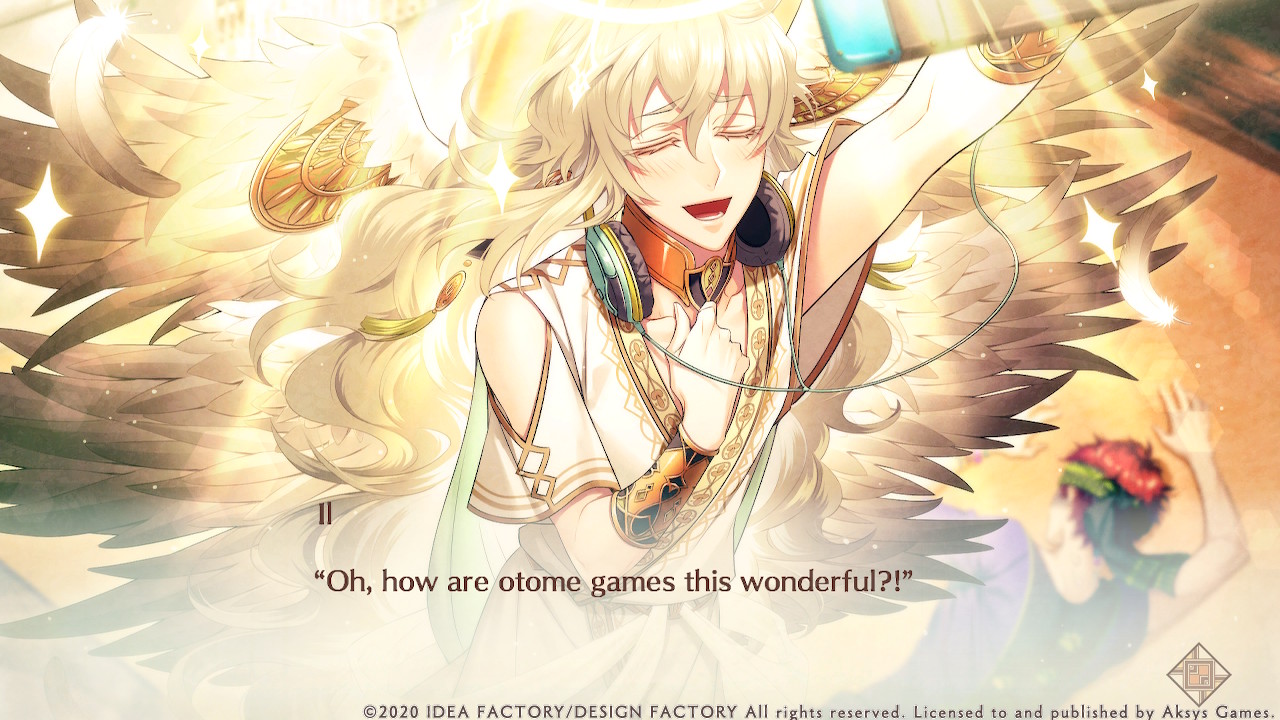 But when it comes down to it, what often matters most in a visual novel is how well you can or can’t connect to the characters. Everyone here is well realized. Misyr is the mysterious demon lord, but he can be forthcoming and goes out of his way to help the people who matter. Ignis seems brusque and rash, but we see him open up not only in his route, but in the common route. For a guy who doesn’t have a face, Canus is surprisingly emotional and easy to read. Every member of the cast is memorable and well-written. It is shocking exactly how well everyone works together.

Cafe Enchante is refreshing. Every character is special in their own way, with personalities that complement each other. The story is structured in a way that you see a relationship naturally develop between the heroine and each of the bachelors. It also takes the time to provide insight into what these otherworldly realms are like, so we have some idea of what we’re getting into even before the more serious conflicts develop. I suppose the best way to describe it as well-rounded. So well-rounded, in fact, that I think it is one of the few otome visual novels that could appeal to a much larger audience.

Cafe Enchante will come to the Nintendo Switch on November 5, 2020.

When Kotone inherits her grandfather’s Tokyo café, she discovers the shop holds more secrets than anyone could imagine. The café is a meeting spot for beings from multiple, mystical worlds. You’ll meet the king of demons, a humanoid beast, a fallen angel, and more. And when government agents monitoring non-human activities show up at your door, your new café is about to become a lot more colorful.
8