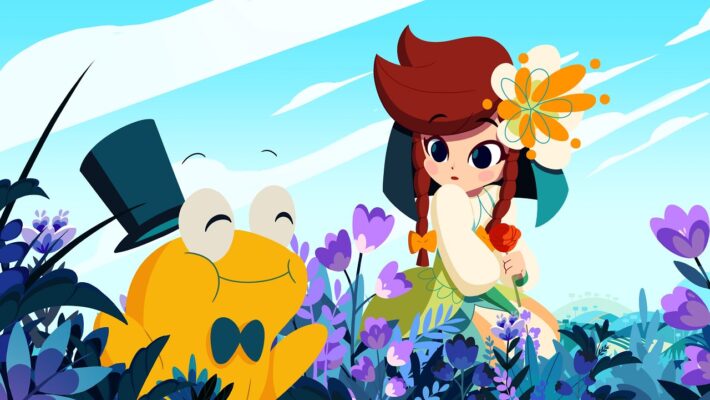 There are times when you’ll come across a game with such heart and hopes, but find technical limitations hold them back. Cris Tales is a perfect example. This is an RPG that tries to do so much, narratively, in terms of features, and visually. It really can be novel, with dungeons that constantly have their own gimmicks and challenges. But while Cris Tales feels full of potential and promise, I experienced quite a few flaws when playing on the Switch.

Crisbell is an apparently ordinary orphan in the town of Narim. While tending roses in the orphanage garden, a frog steals one and leads her on a chase that ends in a church she really isn’t supposed to enter. When she does, she suddenly gains the ability to see the past, present, and future at once. It turns out she is a time mage, which means abilities to see other time periods and influence the flow of time to alter the present and future. However, after actions at her home lead to her being exiled, she finds herself going around the world to visit ruins, getting caught up in events that could alter (and potentially save) the world. 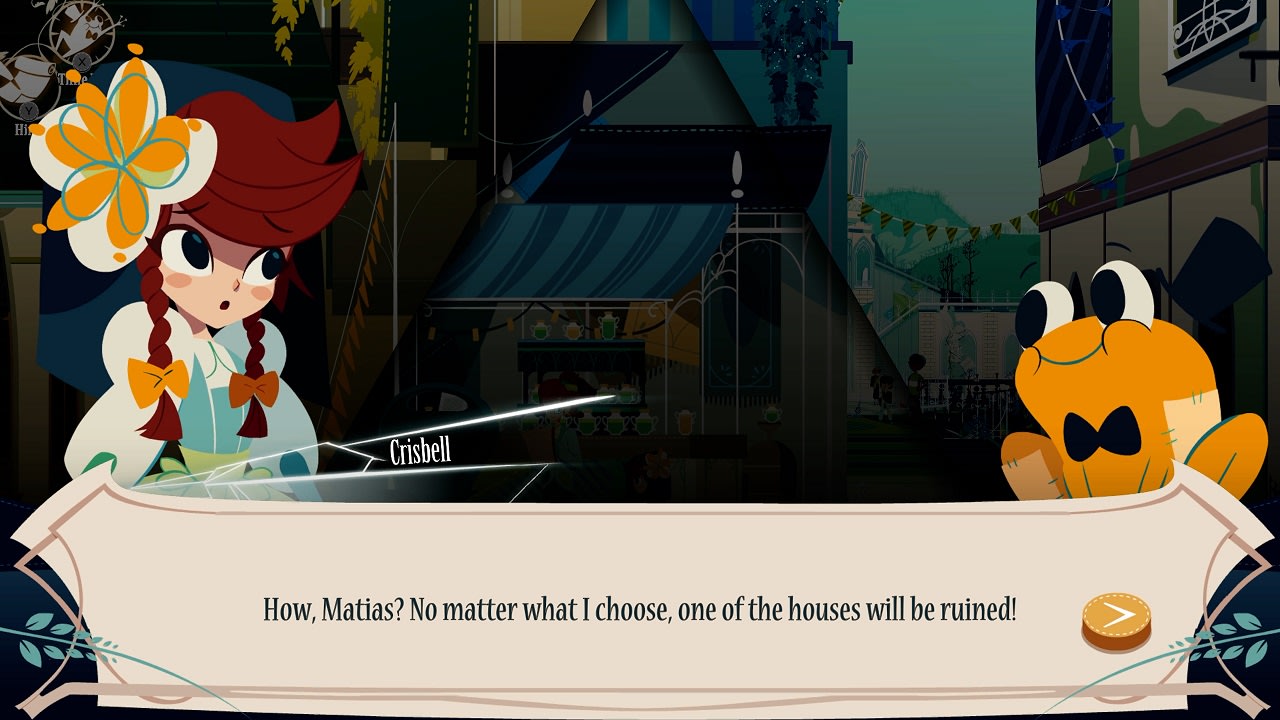 As Crisbell is a time mage, Cris Tales main gimmick involves using that to the fullest. In the towns you’ll come across, this means being able to see the past and present while seeing the future. This can, in turn, lead to making decisions that influence characters in both main and side quests. One of the earliest, non-spoiler examples is finding out two homes are infected with a disease that will cause them to completely fall apart in about five years. You can send your frog friend Matias to the future via a time-hop to get a fruit needed to make a serum to save one place. But there’s only enough for one dose. So sending the mascot character ally into the past or future and be willing to make tough decisions comes up quite a bit.

Time-traveling comes into play in battles as well. Crisbell’s abilities can alter the flow of time. So sending someone into the past or present at the right time can result in interesting tactical results. An opponent will know different skills or have different weaknesses at different points in their life. Or, in the case of a tutorial boss fight’s example, using water on an impenetrable metal shield, then having Crisbell show the future, will mean that shield is now rusted and weak. It also means helpful spells to heal the party. Which comes in quite handy in this turn-based RPG. And while Crisbell is your time-tripper, other allies can have interesting gimmicks too. For example, JKR-721 can “overheat,” which can be weaponized if you plan ahead and determine when it happens and his position. And Zas has a roulette that influences what sorts of magic she’ll use. 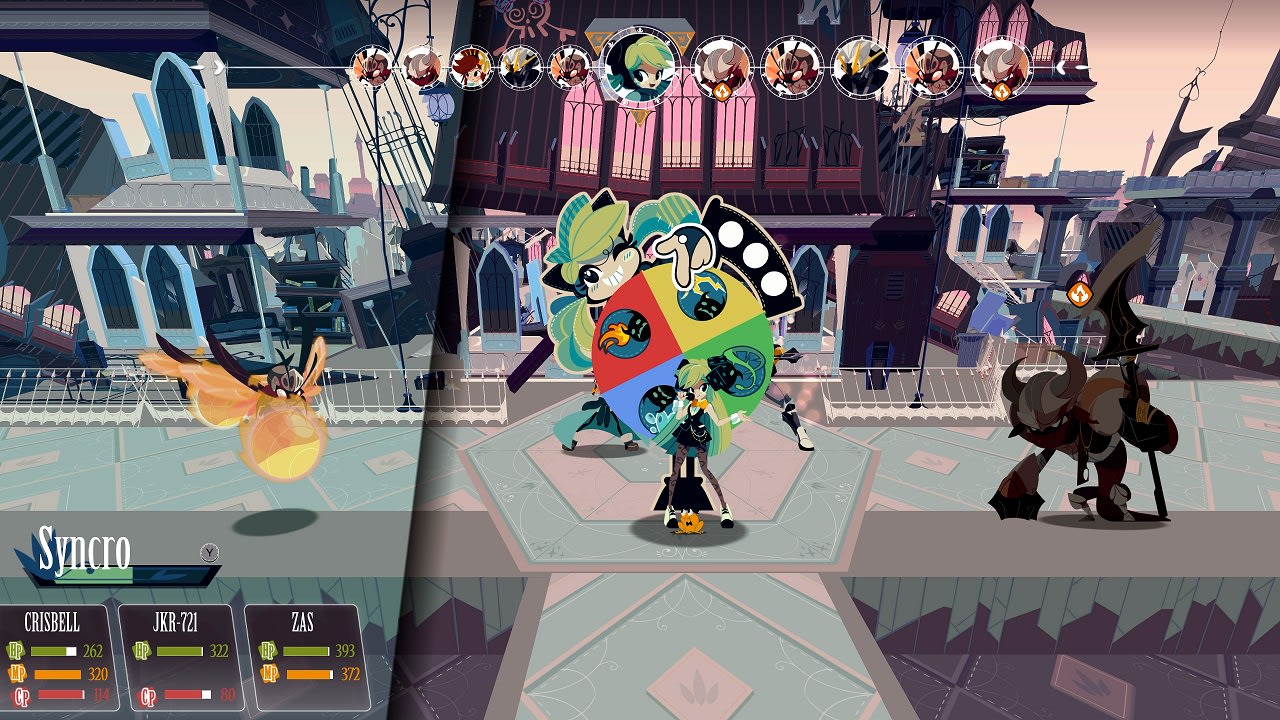 The thing about Cris Tales is even with so many positive elements and influences, there are issues that add up. The smallest things that nagged at me were things like not providing ample warning before “point of no return” story choices that could lock you out of side quests. Like you will get an alert, but some people might already be unreachable at that point. Which in turn means you will miss completing some quests. (I’d recommend finishing the extra tasks as soon as you can in Neva Tulira, as that’s where I ended up missing out.) On the Switch, Cris Tales is plagued by constant loading. It’s to the point where after every major battle or action, you have to sit and wait. It’s very disruptive.

But some of the more frustrating things hamper pacing more than constant loading. There is a lot of backtracking in Cris Tales. In the name of avoiding spoilers, let’s just say that you’ll be visiting places, then find yourself forced to revisit them. It felt like artificial padding after a certain point to draw things out further. And when I went through Cris Tales on the Switch, it crashed four times. After a while, I got to the point where I would save as frequently as I could, just in case the game would fail me again. 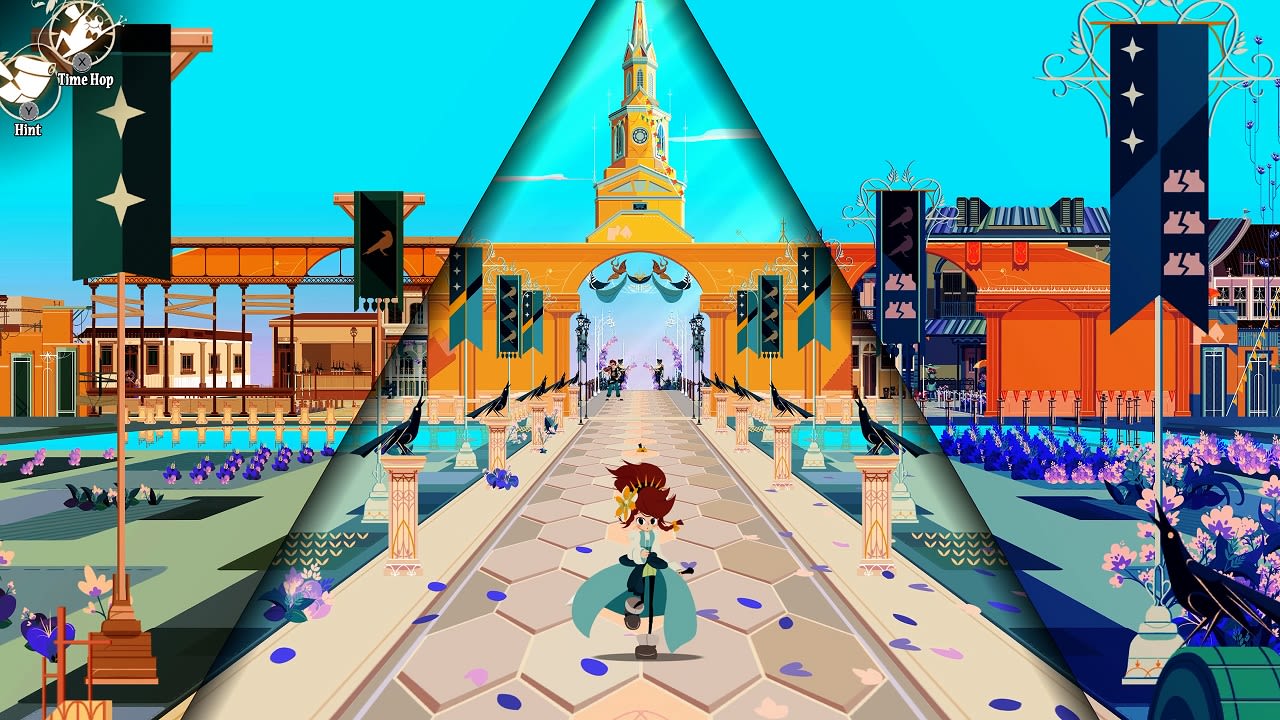 Yet even with the technical issues and some pacing problems, I genuinely loved a lot of things about Cris Tales. The overall presentation is one of my favorite parts. I’ve never seen a game look like this before, and it is absolutely stunning. The design direction is amazing. Every character looks incredible. Every enemy is visually appealing. Each city has its own personality. And it doesn’t just look phenomenal. It sounds lovely too. The voice acting is, on the whole, extraordinary. And the compositions used for its soundtrack are always apt as well.

Cris Tales is an incredibly creative game with its own distinct identity. There are times when it can feel like it drags on a bit. It feels like something special. But it also feels like a game that, at least at the moment, needs a little bit more work. The Cris Tales Switch version feels like it is constantly loading for the smallest reasons and might occasionally crash. If Dreams Uncorporated and Syck can fix those issues. it will eventually be a must-play game.

Cris Tales is available for the Nintendo Switch, PS4, PS5, Xbox One, Xbox Series X, PC, and Google Stadia. It is also on Xbox Game Pass.

Discover a unique combination of branching stories, innovative combat, and classic RPG gameplay in Cris Tales’ exciting and unforgettable exploration of how our actions echo through time. Join the newly awakened Time Mage, Crisbell, and her fantastical companions in a fantasy world facing a grim future. The powerful Time Empress and her forces threaten to bring about a cataclysm tearing apart Crystallis and the other four Kingdoms of the region. Switch version reviewed.
7