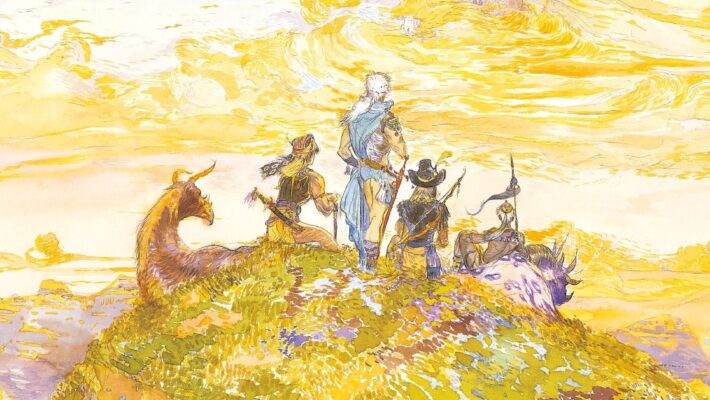 While most of the Final Fantasy Pixel Remaster entries are reacquainting people with games they know, the line’s rendition of Final Fantasy III is an introduction. It never really appeared outside Japan in its purest form. We saw the 3D remake, which added new story elements, reinvented the characters, and altered the job class, but still missed that formative installment. Now everyone, everywhere can play it more easily, and it is a fascinating look back at Final Fantasy history.

Given this is a gussied up Famicom game, the story and its characterizations are more rudimentary than in the 3D remake people may be more familiar with. The world is out of balance, with enemies running rampant and disasters placing innocents in danger. Four orphans raised in the small town of Ur went exploring in a nearby cave and fell into its unknown depths. There, they encountered the Wind Crystal. It bestows upon them the Black Mage, Monk, Red Mage, Warrior, and White Mage job classes. As the new Warriors of Light, it falls to them to aid people across the world and restore balance. 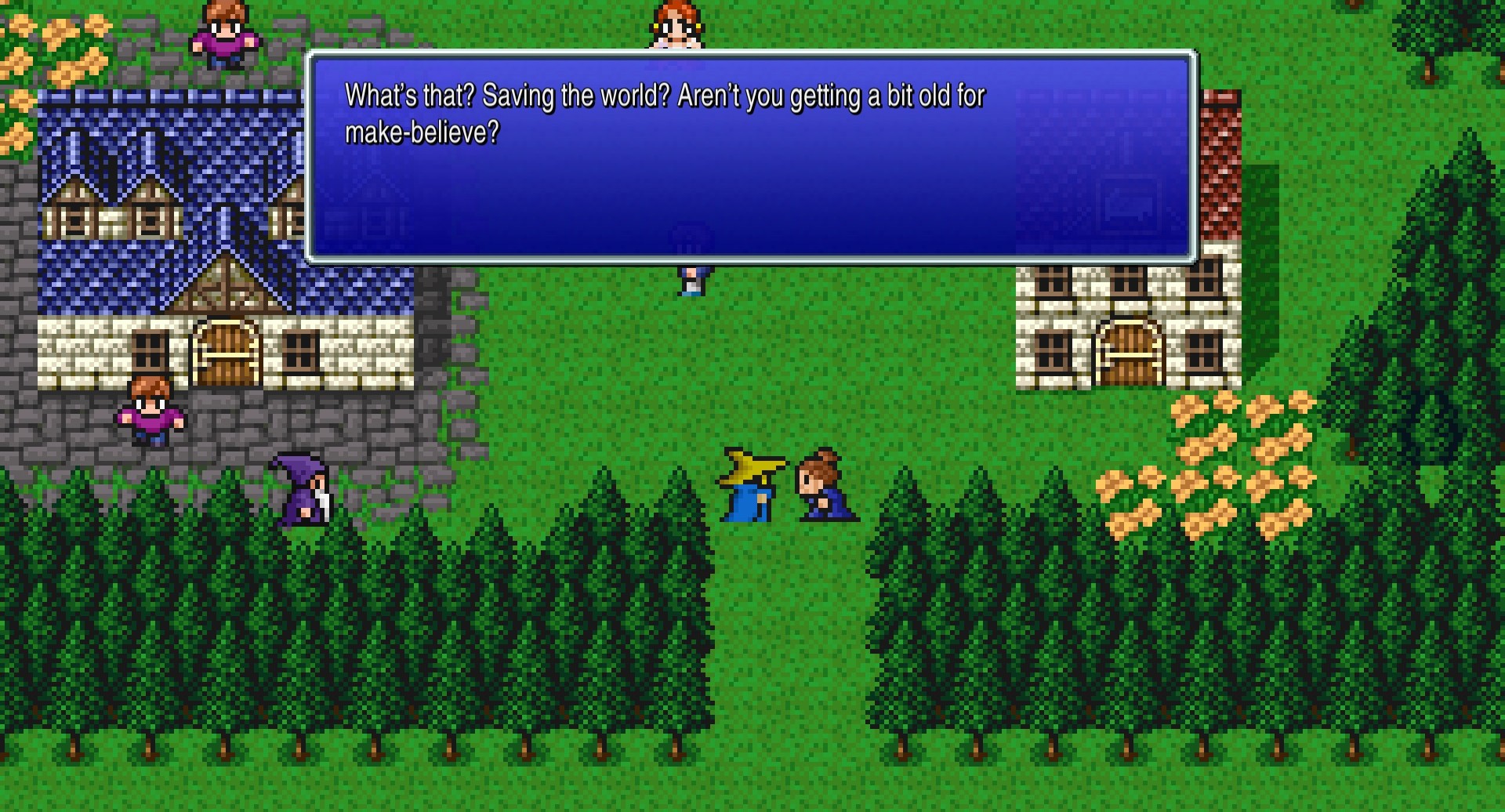 Things are fairly well telegraphed, and Final Fantasy III Pixel Remaster follows a formula folks are familiar with. You head to a town. Once there, you tend to find something is amiss. You pick up a mission that leads to you facing some sort of major enemy causing trouble for the area. Perhaps your choices lead to you getting some sort of boon that lets you explore more of the world. You eventually reach more crystals, obtain more jobs, and become more formidable.

As this is an older installment, battling and growing in Final Fantasy III Pixel Remaster can require a bit of thought. Different classes have different potential specialties available to them. As you take part in turn-based battles, complete with an auto-battle option this time around, you gain experience. Mages will need to purchase spells to add to their repertoire at towns, so you can use their special abilities. (They’ll also be limited to three spells per level, so make wise choices!) You’ll also need to keep track of what someone can and can’t use when swapping jobs. Since this is a fairly direct remake, that means some of the Final Fantasy III 3D remake quality of life choices are absent. So as you go through the game, you will find some jobs have a limited window regarding how long they are useful. 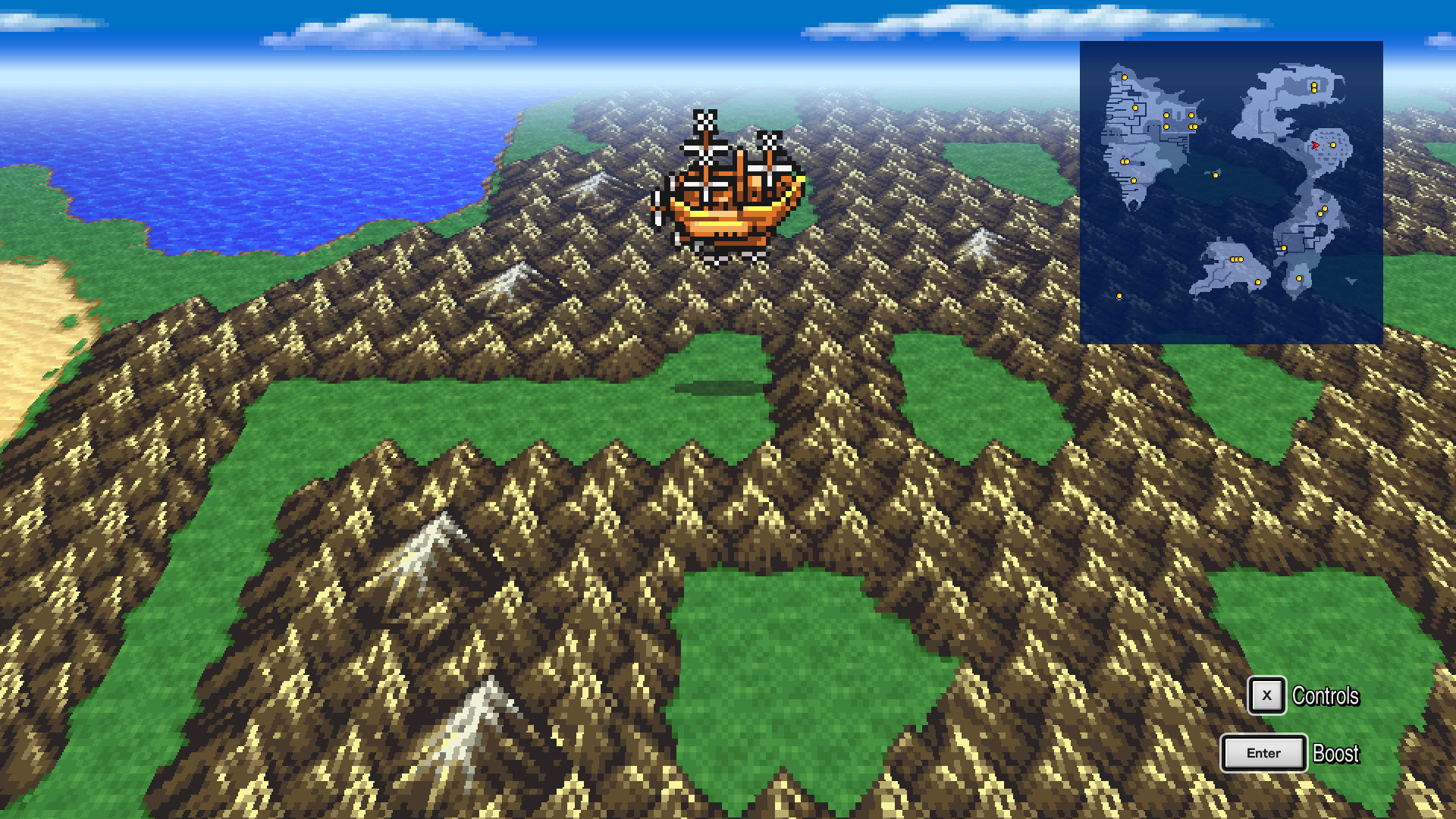 Still, what makes having Final Fantasy III Pixel Remaster is how many moments it has in which you can see the series’ influence. You can tell how Final Fantasy and Final Fantasy II affected this entry’s characters and world design. From the way the Heroes of light look and work to how NPCs behave and function, in particular. Having people temporarily join you is a callback to FFII, in particular. Then, in turn, people familiar with later installments can see how this installment altered them. The way the world functions and its parts are a clear precursor to FFIV’s world and FFV’s job system.

The art direction is quite lovely. Everything is completely remade and revamped from the original Famicom release. The sprites draw inspiration from 16-bit roots. But even that isn’t an accurate way to truly describe them, as there’s a great range of color used here. Especially when facing some enemies, really looking at the different job classes, or watching how light plays across the water. The remastered music includes some flawless and wonderful performances. While the original soundtrack is absent, there is a filter to offer.a CRT sort of look. 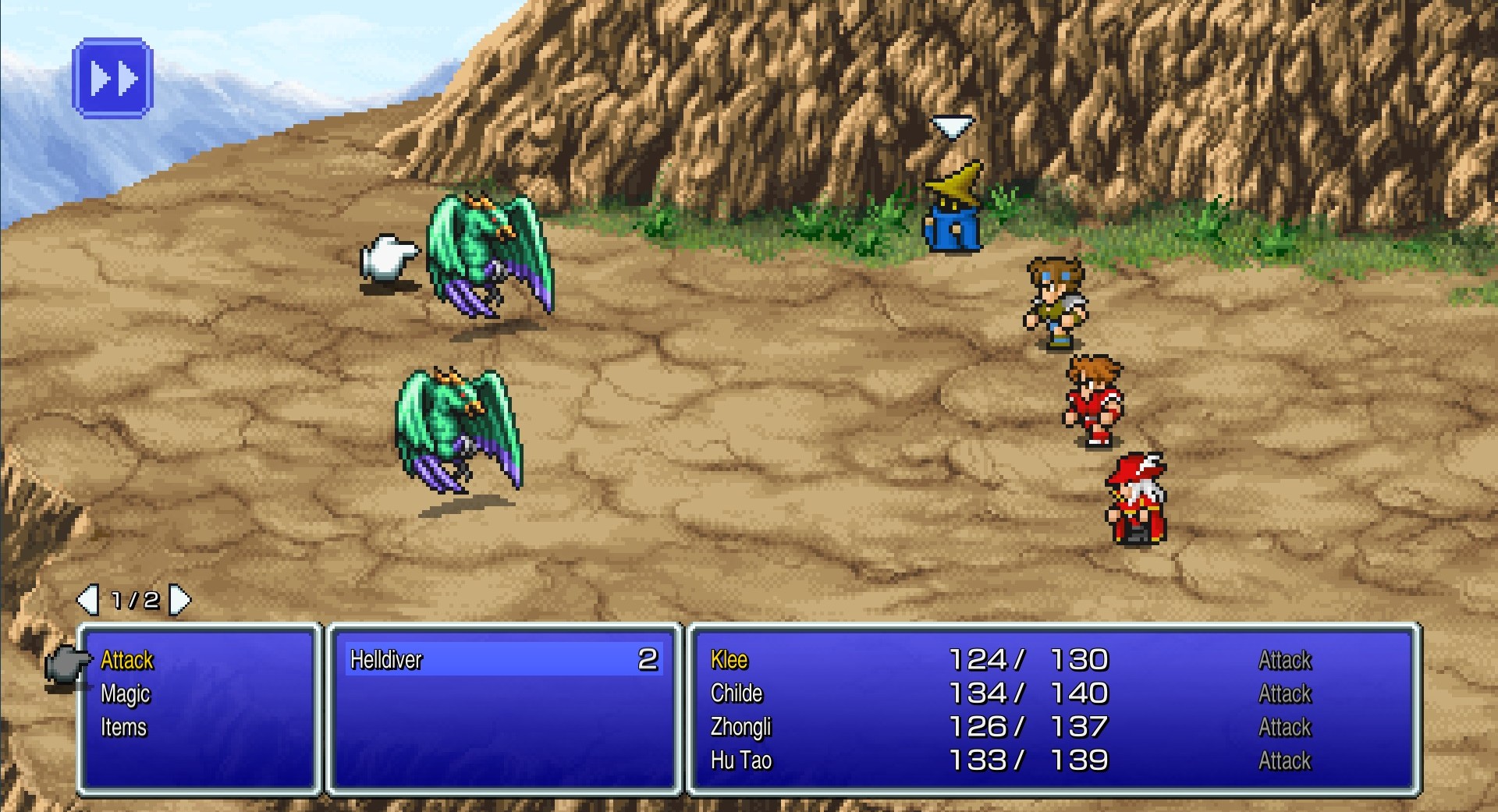 Though, admittedly, I might have preferred a bit more care with the sprites. In Final Fantasy III Pixel Remaster and the 3D remake of this installment, it seems as though the four heroes are younger than usual. The Onion Knight initial class and their demeanor in brief responses both seem to suggest that. Yet when they swap to a different class, they’re suddenly appear to be fully grown. But again, it is staying true to the original game, so it is hard to really fault Square Enix’s decision with regard to that.

But where I will fault the design direction is with the UI. For the most part, Final Fantasy III Pixel Remaster resembles a typical entry. Everything is laid out as you might remember. And there’s a lovely feature that shows a splash of the world map on your save file to remind you where you are. However, the font choice is jarring. There’s empty space that isn’t being used and things feel far more compact and awkward than they need to be. It’s especially annoying if you head into the menus and, say, look at your characters or items. There’s a mish-mosh of choices that don’t fit together. The font used for numbers looks more akin to the one used in the original game. But you have the new text font alongside it. And on the main menu page, there are odd size choices involving characters’ names and current class. There’s a lot of wasted space and the text is the ugliest thing in an otherwise beautiful remake. 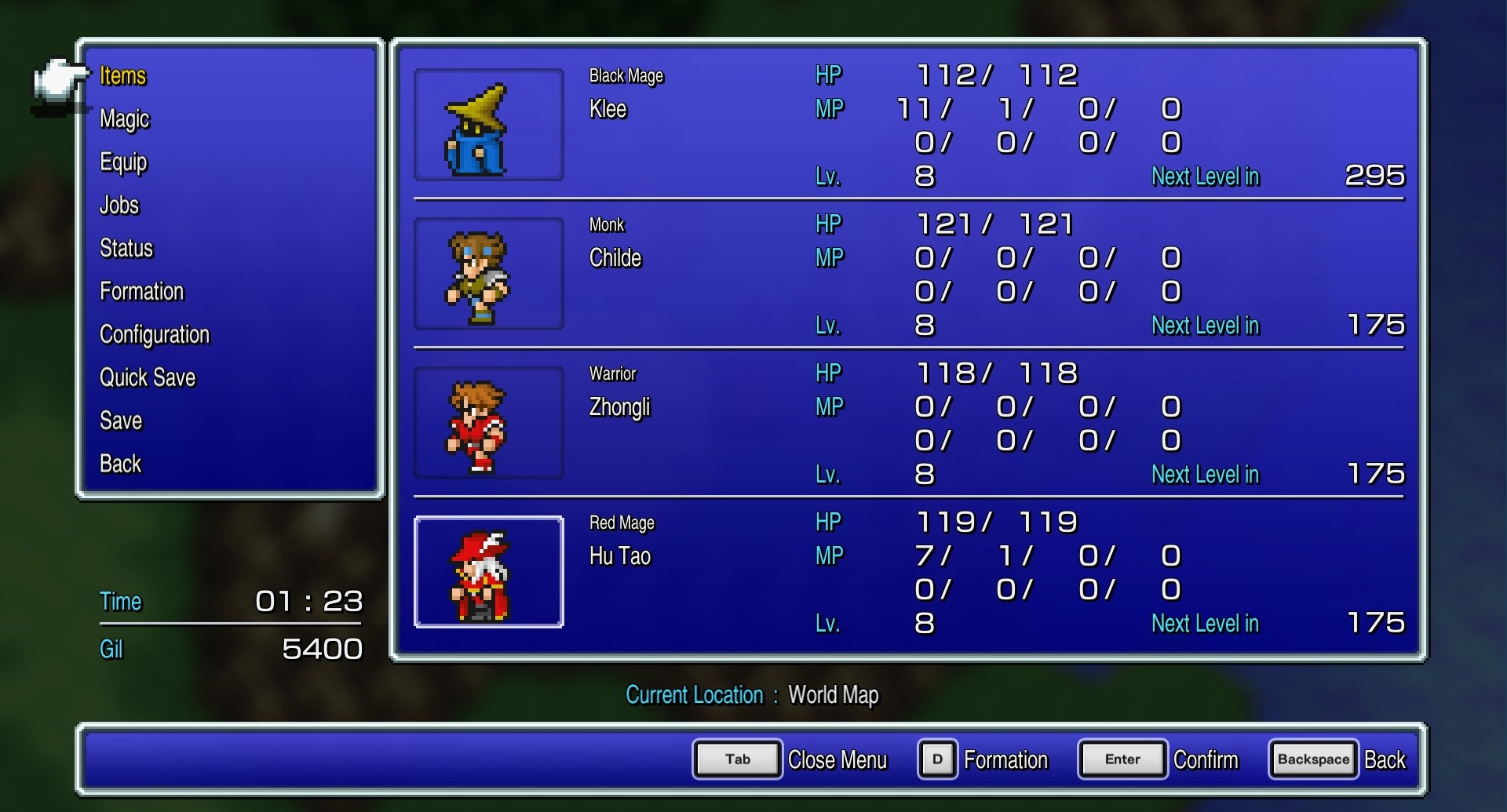 Still, some of its extras can be quite handy and lovely for historical appreciation. Though, keep in mind, you will have to return to the main menu to access them. There’s a Bestiary that, honestly, I would have appreciated having access to while in-game. It provides details about enemies while also showing their art and location in the world. The music player lets you access all 45 tracks, while the gallery lets you see concept art for characters and enemies.

Final Fantasy III Pixel Remaster is an opportunity to play through a missing piece of the series’ history. Some of its concepts might be a bit antiquated, but it’s amazing to essentially have a prettier version of a video game time capsule to finally peruse and learn from. While the UI has some issues, Square Enix did a great job of restoring and bringing this game to audiences that have spent a long time waiting for it.

The original FINAL FANTASY III comes to life with completely new graphics and audio as a 2D pixel remaster! A remodeled 2D take on the third game in the world-renowned FINAL FANTASY series! Enjoy the timeless story told through charming retro graphics. All the magic of the original, with improved ease of play. With the power of light nearly eclipsed by the power of darkness, only the crystals' four chosen adventurers can save the world. Experience the iconic job changing system first introduced in FFIII - switch jobs at will and use various abilities as you progress in the game. Change into a variety of classes like Warrior, Monk, White Mage, Black Mage, Dragoon, Evoker, or even call monsters to do your bidding with as a Summoner. PC version reviewed.
7