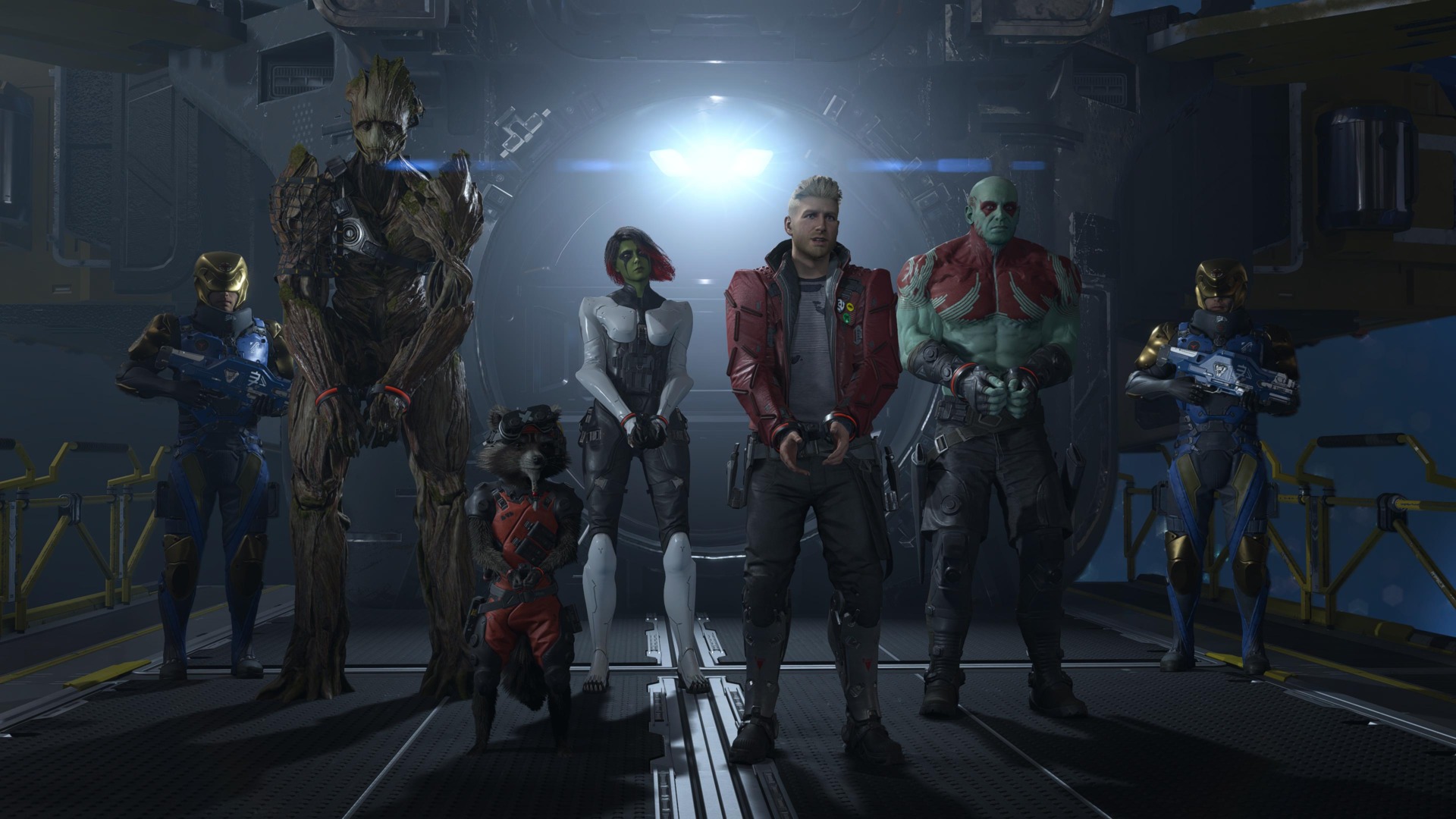 Comic book video games always seem to be hit or miss. Sometimes, they are universally loved like the Marvel’s Spider-Man games from Insomniac. Other times, they are panned a la Marvel’s Avengers. Which is why I was a little hesitant to review Square Enix’s Marvel’s Guardians of the Galaxy. In all honesty, this was originally going to be a playtest. Invest ten hours or so to get a feeling for the game and pick one or two aspects to discuss. But then I kept playing it. Chapter after chapter, I felt compelled to continue the adventure. Bet you weren’t expecting to hear that.

The Guardians have just formed their team and are looking to make some quick units. The team ventures into the Quarantine Zone on a tip that there’s something hidden in the wreckage that Lady Hellbender would pay a pretty penny for. The plan: get in and collect said item before Nova Corps spots them. Sounds easy enough, so long as everything goes according to plan. But what sort of Guardians of the Galaxy story would that be?

To add to the pressure the Guardians are under, things are tense with the group. Rocket and Drax are not welcoming Gamora, despite Peter’s insistence that her past is just that. Since we play as Peter, opportunities arise where we can speak to our comrades and hopefully sway their emotions in the right direction. It might not always turn out the way we want, and these timed choices will carry through the game via callbacks. You’ll note that their trademark snark and bickering is woven throughout the story. I mean it just wouldn’t be Marvel’s Guardians of the Galaxy without that, right?

As the Guardians shoot, slice, and slam their way through the universe, we encounter faces familiar to these heroes as well as new ones. Most notable is the Universal Church of Truth. People have come across several iterations of this rather insidious group over the decades. When I spotted Grand Unifier Raker, who was also picked up by Nova Corps for being in the Quarantine Zone, I just had a gut feeling that he was up to something even worse than Peter et al. But nothing could have prepared me for what that grand plan entailed.

While we don’t get to play as anyone aside from Peter, we can use them to interact with our surroundings and in battle. As Peter comes across interactive elements during exploration, he can target them and ask for assistance. These are best detected using his visor, but sometimes are easy enough to spot without it. Some elements call for Rocket to hack panels or crawl into tight spots. Others require brute strength, jump boosts, or bridges. It’s fairly easy to ask the right person for each job, but sometimes they need a little persuasion.

In battle, Peter can ask the other Guardians to perform unique abilities in the same manner. These skills are unlocked by investing ability points into perks for everyone, including Peter. When you bring up the command screen and want to use one of Star-Lord’s perks, look for the button icon in the bottom left of the screen. Rocket’s were my favorite. Especially his cluster grenade, which pulls enemies into a clump. Pairing that up with one of Peter’s elemental shots got me through some pretty tight jams.

Huddles can inspire the Guardians to do some major damage if handled correctly. Once the meter next to the character icons is full, Peter can pull the team together to rally them with his inspirational words. Now, whether or not you strike the right chord is up to you. Listen to anything the others say and pay attention to the keywords behind them. If you choose the correct response everyone gets a limited time power boost. Make the wrong call and only Peter gets that buff.

While fairly infrequent, there are some shooting gallery scenarios. Piloting the Milano through obstacles and blasting baddies out of the way weren’t highlights for me. Just clearing tight spaces was fine. I took some damage, but never to the point I had to restart from the checkpoint. Actual space battling though? Not a fan. I couldn’t control the camera angles, since the right stick was designated to do two things at once and never rolled when I wanted it to, but always when I didn’t.

I spent a lot of time searching for as many nooks and crannies as possible. Upgrades to Star-Lord’s gear require components scattered about each level, and I wanted to get as many as possible. You’ll also want to find collectibles. There are two types: new outfits and character background items. For instance, early on I located a broken translator. It is on display now in Groot’s area of the Milano. Whenever I pick it up, Peter talks about it. Another item specific to Rocket is in his room and when I interacted with it for the first time, he opened up a little. You might even come across abandoned communications which fill in a little bit of backstory or give a brief insight into the history of whichever multiverse designation we’re currently in.

Guardians of the Galaxy, while fun, is not perfect. The lip syncing isn’t quite up to snuff, and there are some graphics issues such as flickering assets when riding certain elevators. But where it fails the most is with quick time events (QTEs). There are no in-game tutorials for these. They pop up and you are expected to immediately know how they all work. I’m familiar with QTEs that require pushing the button as soon as it is displayed. Here there is nothing to tell you to if you need to wait until you are within a ring or need to mash ASAP. When Star-Lord acquires new elements, there’s a completely different sort of QTE. I had to replay these a few times before figuring out what I was supposed to do. Targeting from within the visor view could also be improved. Scanning objects requires finding a precise spot, even when its a gigantic item and the entire thing glows.

I do wish that the game made better use of the PS5 DualSense controller. Haptic feedback could be vastly improved when it comes to Star-Lord’s weaponry. The rumble should increase as the blasters heat up and then stutter when they lock up. Or give me a satisfying click when I correctly time a reload as well as push the sound through the built-in speaker. That last part was oddly hit or miss. Sometimes I’d hear the click through the controller but then the following one would come from the television.

At the end of the day, Marvel’s Guardians of the Galaxy is everything I wanted it to be. There’s classic Guardians snark, bickering, and epic fight scenes scored with tunes from my youth. It just needs a little more polish to make it really sing.

Marvel’s Guardians of the Galaxy will be available for PlayStation 4/5, Xbox Series X/S, Xbox One, Nintendo Switch, and PC on October 26, 2021.

Marvel's Guardians of the Galaxy

Marvel's Guardians of the Galaxy is an intergalactic romp filled with action, snark, and maybe saving the galaxy to a killer soundtrack... if our heroes can stop bickering long enough. This action adventure game from Square Enix and Eidos Montreal puts players in Star-Lord's jet boots as the leader of the not-yet-infamous Guardians working to make a name for themselves. PlayStation 5 version reviewed.
7