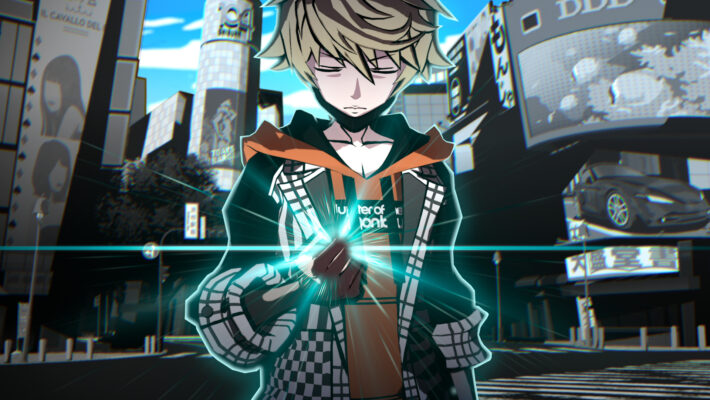 When I played The World Ends with You on my Nintendo DS back in 2008, I was struck by how vibrant and wonderfully unique the game is. I’d hoped for more for years, especially after teases found in the ports. Now we’re back in Shibuya for NEO TWEWY, and it is the sequel the original deserved. Yet, at the same time, it stands tall on its own merits and is a welcoming experience for people completely unfamiliar with the series.

NEO TWEWY begins much like its predecessor did, which is with a teenager in Shibuya. Rindo is about to hang out with his friend Fret. Things are extremely normal. The two text, with Line-like stickers peppering the conversation. They meet in front of a store. Fret gives him one of two “rare” pins he acquired. (Though Rindo does accidentally drop his and an unseen person gives it back.) They get something to eat. Rindo plays a Pokemon GO clone with Final Fantasy monsters called Fan GO. Then, when heading to the Scramble Crossing to possibly meet up with a Fan GO friend of Rindo’s named “Swallow,” everything goes wrong. 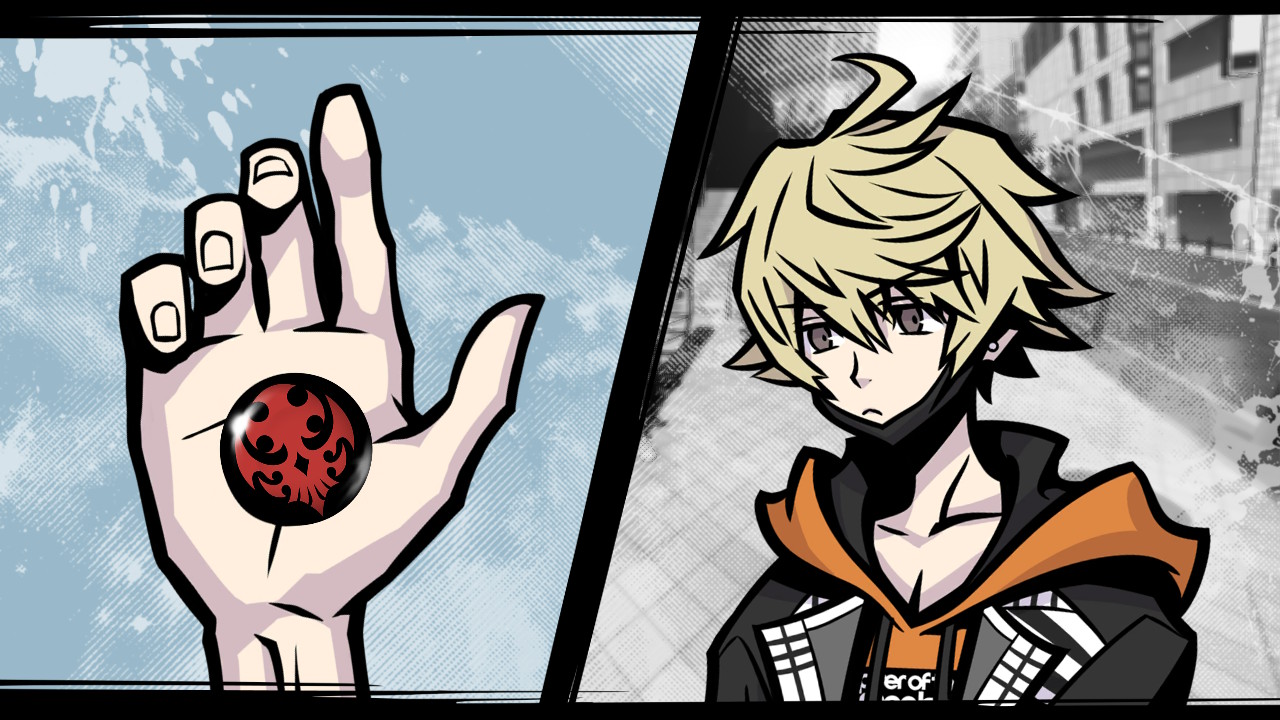 Suddenly, they’re in a midst of a battle. Rindo sees a vision of Fret in grave danger. The two survive, but find they’re in the Reaper’s Game. Throughout Shibuya in the “UG,” people who are dead compete on teams to evade elimination. The team in last place at the end of the week is eliminated. The one in first gets a request granted. Players can use pins to perform Psych attacks against other teams’ members or to fight strange monsters called Noise. Oh, and each day, the Reapers have a new mission for them to complete for points to stay atop the leaderboards. Rindo, Fret, and the allies they recruit to their Wicked Twisters team now must fight to survive.

Yes, that’s a lot to take in, but NEO TWEWY handles it well. So well, in fact, that people entirely new to this series should find it easy to adapt. The fact that the three primary leads are Rindo, Fret, and Nagi, all characters new to the series, helps. Though along for the ride when things kick off is Minamimoto, a returning character from the previous installment. When people making comebacks appear, they tend to be properly introduced and have characterizations that show their growth from TWEWY, while also properly defining them as characters. 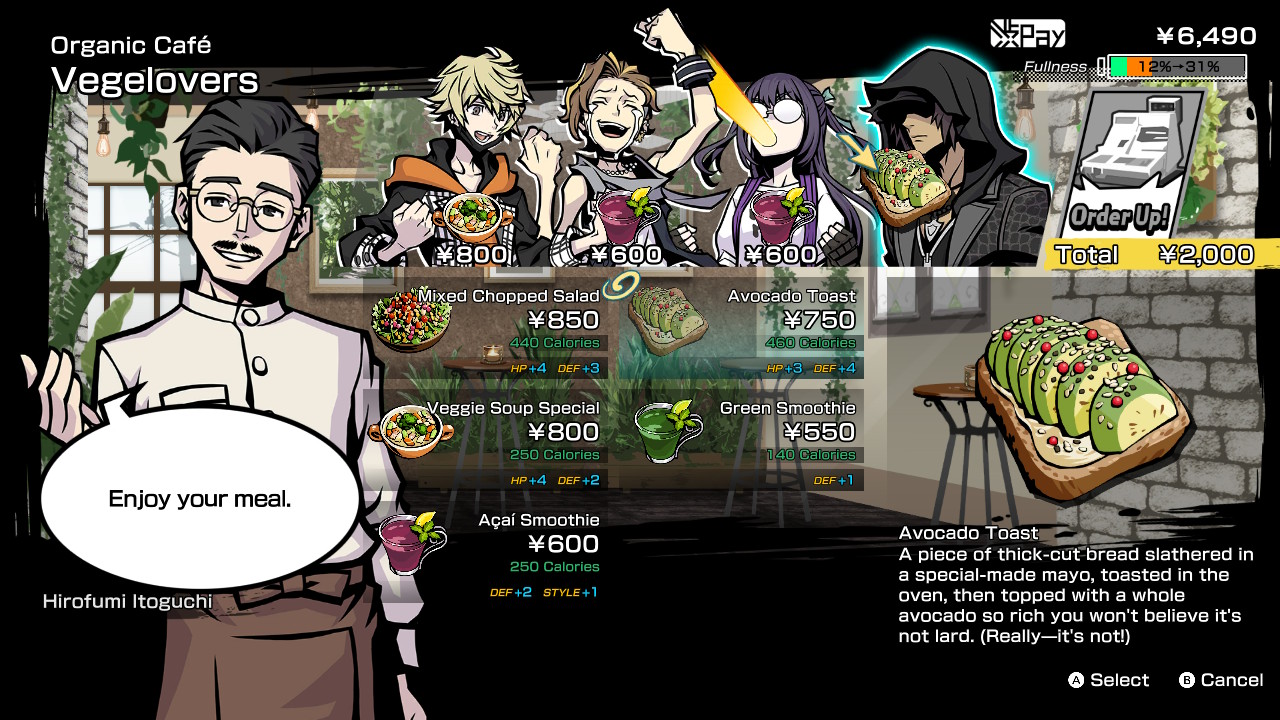 NEO TWEWY also handles its progression well. When you go through the week, you’re taking on challenges each day. Certain districts in Shibuya, which are all inspired by real-world places and look the part, might be opened or closed to you. (Or temporarily closed and in need of unlocking via completing a task for a Reaper.) Though people are no longer in the real world, it’s possible to shop at stores for clothing to use as equipment and perhaps pins to use as weapons. These always provide boosts to stats, though someone’s Style stat will need to be high enough to meet a requirement before a clothing item’s special skill will kick in. (Clothes also aren’t gender locked, just like they weren’t in the original.) You can buy and eat food, but that provides permanent stat boosts, rather than healing. Food characters’ like lead to stronger effects.

If you tap into characters’ powers, you can do things like read people’s thoughts or scan for Noise in the area. In the case of the former, you might find ways to advance through the game. For example, you could gather key words and phrases, which you can implant into someone’s thoughts to make something happen. Fret could issue a reminder to make people think about a plot point so you can learn critical details. Nagi can dive into the subconscious of people plagued by Noise, so you can fight and remove them. 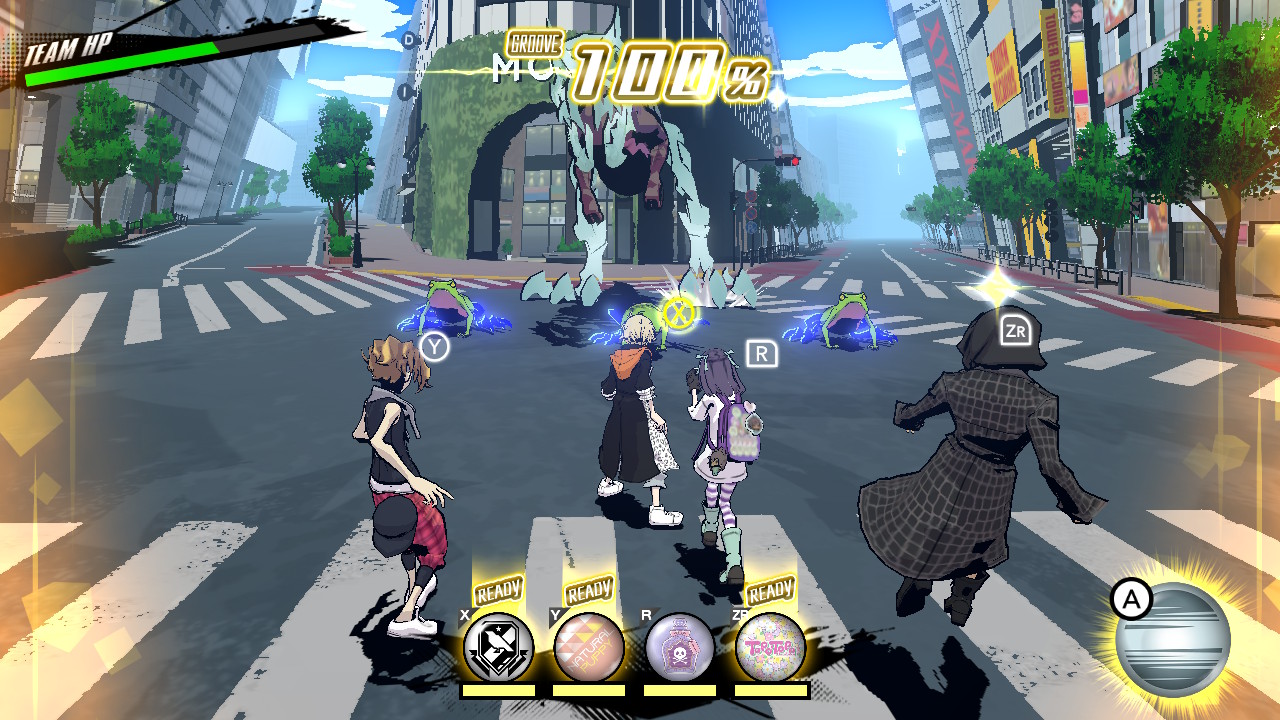 As for Noise themselves, some concepts from the original game carry over. The shape hints at the foes you’ll face. You can chain together battles to increase your experience and pin drop rate. But instead of battles involving controlling people on dual screens with swipes, each person has one pin assigned to them. Different pins have different attack traits, inputs, and elements. The goal becomes about gathering a set of between three and six to chain together combos. Some pins are great at setting up other pins. Others are good for keeping the groove going. Because while you’re attacking, you get bonuses for occasionally switching to another pin. Building up the synergy between allies lets you unleash a temporarily stronger attack. So your ideal moveset might not use the strongest pins or ones that still have room to evolve. It might be about finding which ones are most comfortable for you and allow you to chain together blows.

What’s interesting about NEO TWEWY is how it fosters connections too. Like games like Xenoblade Chronicles, there’s a whole social network roadmap. As you visit stores or meet people, you’ll unlock access to their nodes on a map. By taking on side quests, you earn points to invest in them. These can give you physical items, like new pieces of clothing, or more features. For example, the hard difficulty level is locked behind the node of someone you meet within the first hour. Investing in it lets you switch to that difficulty at any time. (Which is good, because some pins can only be acquired from “hard” battles.) But maybe you also get the ability to jump over small walls. 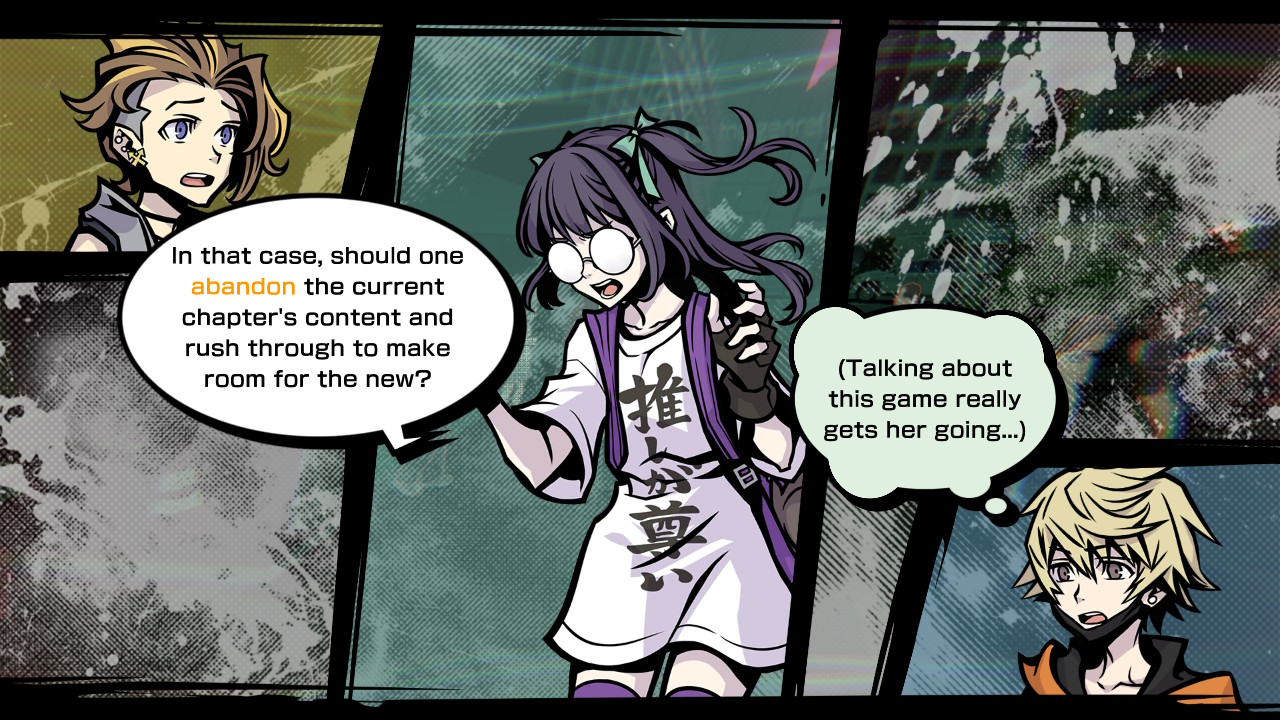 And what’s also great is that the game doesn’t punish people who want to prioritize getting through the story over unlocking everything. Thanks to one character’s ability, there’s a plausible explanation for why you would be able to go back and revisit a past day. That allows you to go back and catch things you might have missed, like an extra person on your social network roadmap. This ability to rewind also comes up during days in the week, allowing the party to go back to an earlier point in time to alter events and change the future so they can be successful. And for people who do want to try and see “everything,” there are rewards for that as well.

As for how it looks and sounds, NEO TWEWY stays true to its roots. The characters look amazing and modern, with every Reaper and player in the Reaper’s Game looking fashionable in their own way. Even a casual look is a good one. The music is amazing, with lots of new tracks and some remixes of older ones. The Noise have some great designs to them, feeling like they are street art come to life. And Shibuya itself is so much fun to explore, especially when you come across recreations of actual landmarks. 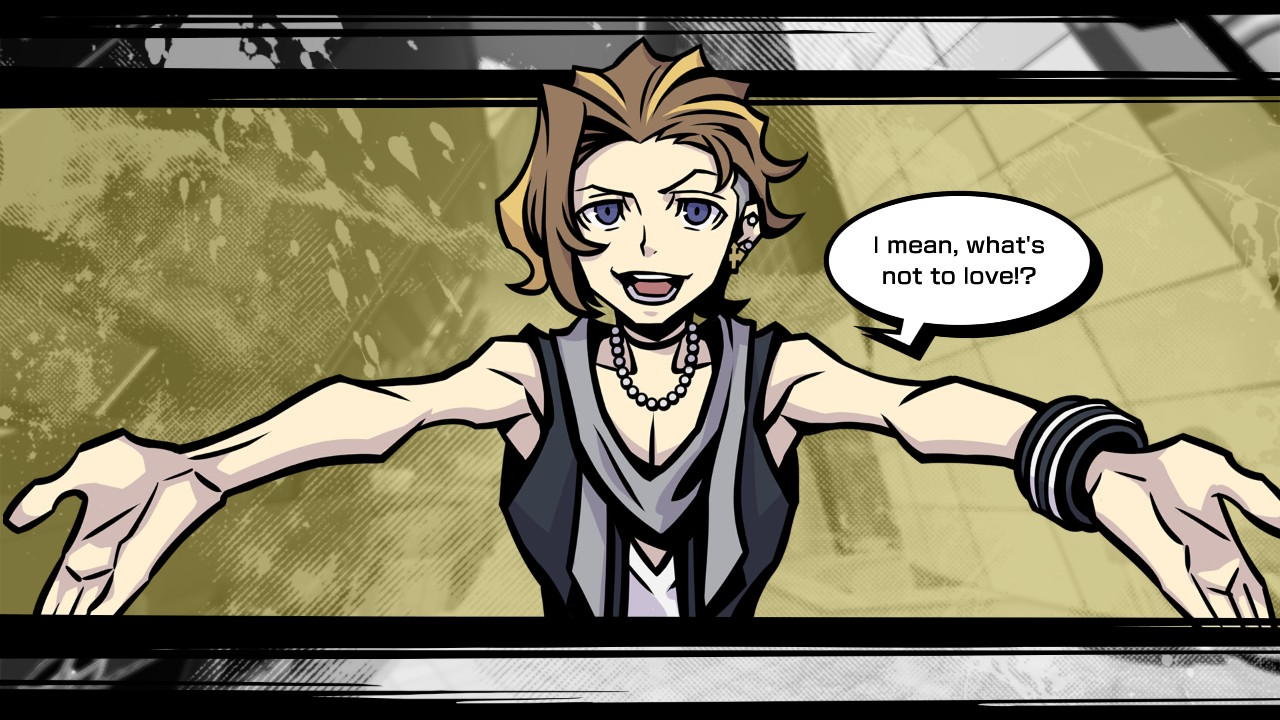 NEO The World Ends with You is both the game returning fans waited and hoped for and a captivating RPG for newcomers. The world is once again fully realized, it’s a blast to collect pins and find combos that work for you, and it’s incredibly clever. As I played through it, I could help but feel like somehow Square Enix managed to meet the challenge of creating a game that paid tribute to and can stand alongside its predecessor.

NEO The World Ends with You will come to the Nintendo Switch and PlayStation 4 on July 27, 2021. It will also eventually appear on PCs via the Epic Games Store in Summer 2021.

NEO The World Ends with You

ndo comes to the grim realization that his life is on the line when he is forced to compete in the so-called "Reapers' Game." There's no telling how this tale will unfold—but it's up to you to find out! Put your psychic prowess to the test as you duke it out on the stylishly animated streets of Shibuya. Switch version reviewed.
9