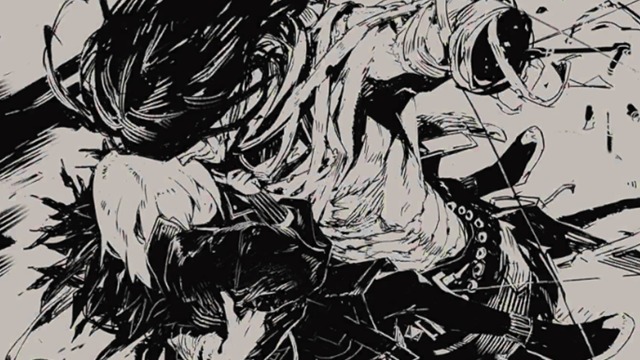 While I am writing this review, I am playing NieR Re[in]carnation. My phone is sitting beside me, the screen partially illuminated as the game goes through the motions of grinding materials in Eco Mode. I have attempted to write this for the better part of a month, my progress barred by a system that forces me to engage with the game more than I would like to. It pushes me to maximize my time spent with it and the handful of events that roll out one after another in what feels like a rushed, endless cycle of engagement. Part of me loves NieR Re[in]carnation for its beautiful and melancholy narrative, while another part fears that I will not be able to resist the temptation of dipping into my wallet to obtain limited time banners’ characters.

NieR Re[in]carnation is a beast of a game, with hours upon hours of content for the player to engage with. There are roughly eleven chapters of story quests to immerse yourself in, each with its own unique narratives about loss and the smoldering embers of hope in a world that is expectedly bleak. It focuses itself on the personal stories of its individual characters, like a bounty hunter seeking revenge, a clockwork soldier experiencing emotion for the first time, and a pair of grieving parents pushing onward after their tragedy. Each of these narratives is unique and intertwines within the world of NieR and Drakengard. You see similar themes permeate these stories and tangle together. They are sad, hopeful, and fraught with pain that translates perfectly through its stellar localization. But they are fragments of a greater story that is incomplete.

Players guide a mysterious young girl who dreams of people across space and time, as she rectifies broken memories of various individuals through their weapons. Those familiar with NieR or Drakengard will quickly realize that these are weapon stories, with each blade, gun, spear, and staff carrying a unique short story for the player to discover. The story is relatively easy to progress through at first as you are being guided by Mama, who serves as a kind hand as she seeks to help the girl reclaim her voice. However, the initial presentation of the game is immediately spun onto its head at the half-way mark. It is after some reveals that the story presently ends. 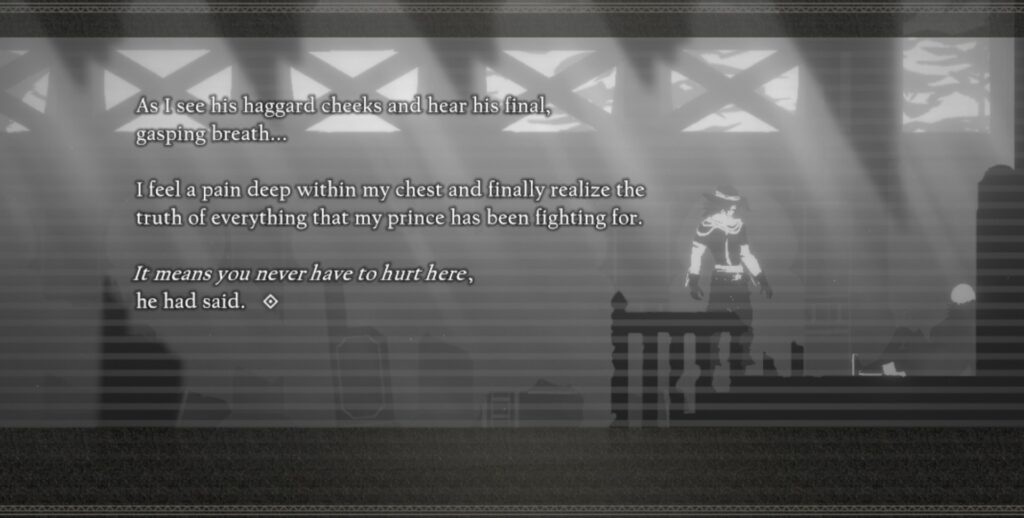 It is gripping and interesting in the turns it takes and the ideas it presents to the player. While people are only given a brief glimpse into these individual stories, they can be expanded upon through Hard and Very Hard completion of these levels once they are available to access. Special weapons are also distributed after completion, which rewards players with unique variants of these characters. However, grinding and unlocking these versions require immense dedication and will no doubt take months if not an entire year to unlock depending on how much time you are willing to invest into the game.

And here is where the problems begin. It isn’t that players will need to dedicate time to the game. After all, longevity is what keeps titles like this alive and its player base engaged. NieR Re[in]carnation has already seen several events funneled into the game since its July 28, 2021 launch, each with a limited time summons banner and a plethora of items to obtain by grinding event medals or tickets. There is simply not enough time or resources to make the most of these events unless if you are playing the game from the moment you wake up until the moment you finally settle in to sleep. I have nearly cleared the NieR: Automata event that was released when the Global client officially launched. One event has already passed me by, and I scrambled to get the best rewards available before eventually giving up, resigning myself to the fact that I would not be able to empty the shop entirely.

Another event in NieR Re[in]carnation is on its way, and another limited time banner with it. My free gems are exhausted, as my characters are no longer strong enough to complete the last chunk of story content. I lack the resources and the time to continue my journey. Force would be required to progress in the game, which can be increased through leveling characters and weapons. Though two and three-star characters and weapons will not be enough to progress through the story content or even a bulk of the event quests. Four-star characters are mostly required for any content, and my progress was impeded for several weeks because I lacked any four-star weapons or characters up until I started spending gems on a limited time anniversary banner that featured doubled drop rates. 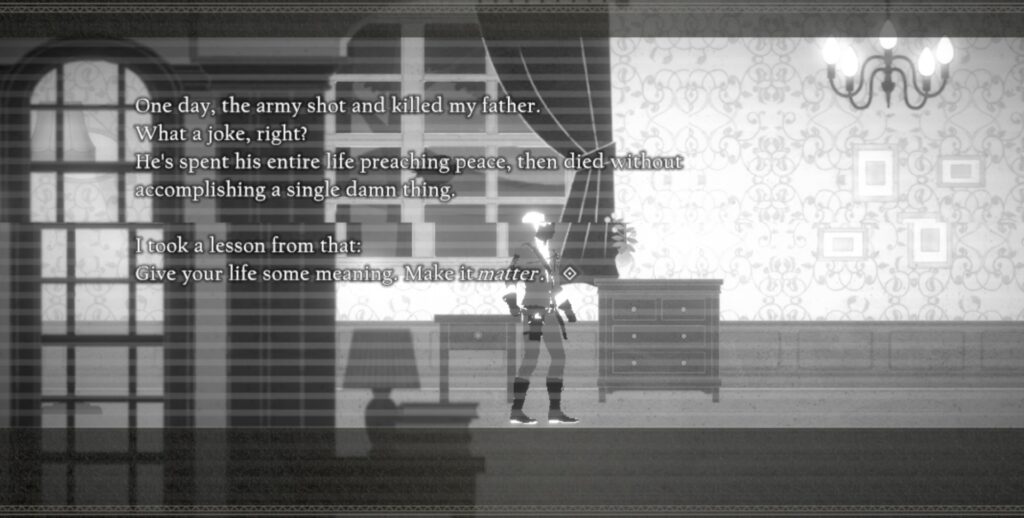 And every time I load up the game, I consider spending more money on it, hoping to get another four-star character or weapon or hoping that I will get a duplicate of anyone or anything I already have obtained to increase my Force. There are other ways, like leveling Memoirs or Companions, which do boost a character’s Force somewhat, but it is not as substantial as increasing a character or weapon’s potency. It feels unfair almost, considering that other mobile games like Fate/Grand Order even allow players to progress through the story with its lowest rarity characters. The only way to obtain a guaranteed four-star character outside of the pity system, which requires twenty ten-pulls, is to spend money on banners that can only be rolled on using paid gems. This costs upwards of $79. I would know, because I spent the money to get a character I felt I needed to have.

NieR Re[in]carnation doesn’t feel free-to-play, but more pay-to-progress or even pay-to-win in the case of its player-versus-player mode. Those with enough luck or gems, since a pity system is available through the banners–a system that was not originally included in the Japanese release of the game–will be able to dominate this mode and any content the game will throw at it. But even then, as resources become scarce or harder to obtain, players may hit a point where they will be locked from progression. Even now I am unable to reach certain end-game content due to this lack of resources or viable weapons, stuck at the final mission of Chapter 11.

Maybe this is some meta-textual element in NieR Re[in]carnation, something found in previous entries in the NieR series. Perhaps it’s a commentary on the futility of investing in these types of business models. Maybe it’s just a less than subtle way of encouraging players to open their wallets.

There are also issues with its user interface and lack of clear tutorials. Icons are still hard to parse at a first glance, due to their indistinct designs. The game is largely concerned with aesthetic over functionality, which can make it difficult to understand what items are required to enhance weapon skills, character skills, and companions due to the icons largely looking the same. Some visual distinction would do the game a great service, and prevent players from constantly having to tab between a handful of menus to achieve what they’re setting out to do. It was also only by going back through the Quest menu that I discovered that harder versions of the main quests were available roughly after a week’s worth of play time.

Regarding quality of life features, the auto-mode is decently functional. Players can repeat up to ten missions at a time through the feature, which allows for passive grinding while focusing on other tasks. Additionally the game does have an Eco mode, which helps prevent your battery from draining as quickly while you play the game. However, this is only available while doing auto-battles of missions you’ve already completed. NieR Re[in]carnation is by no means easy for all devices to access. The game quickly drains battery or crashes frequently if your device isn’t up to snuff. And even then, you could potentially experience lag even on higher end devices. While several settings are available, which lowers the graphic quality of the game, sometimes selecting those options makes the game run worse. The optimization isn’t the best, but several patches have rolled out since its release to make it more functional.

NieR Re[in]carnation is a beautiful game, visually and narratively. It shows the future of what mobile games can achieve through its stylish combat and well rendered character models to its incredibly well crafted narrative about loss, empathy, and how we navigate spaces carrying the weight of our personal traumas. But it is undercut by the system on which it functions, detracting from its core narrative components.

It’s strange to say that I will more than likely continue to play NieR Re[in]carnation, despite already understanding that I could potentially cultivate an unhealthy relationship with the game. The story has drawn me in, in a way that no other mobile game, or even console title, has in a very long time. I love learning about these characters and I love this world, even if I’m barred from progression. However, there is no doubt in my mind that this game will become exceedingly difficult for new players to get into once the double rate up banners and experience point boosts disappear. If you’re looking into playing NieR Re[in]carnation, for better or for worse, now is your time.

NieR Re[in]carnation is immediately available for Android and iOS devices.

Nier Reincarnation is a 2021 role-playing video game developed by Applibot and published by Square Enix for Android and iOS. The game takes place in the universe of Nier and its sequel Nier: Automata, which are in turn spin-offs and sequels to the Drakengard series. Android version reviewed.
6