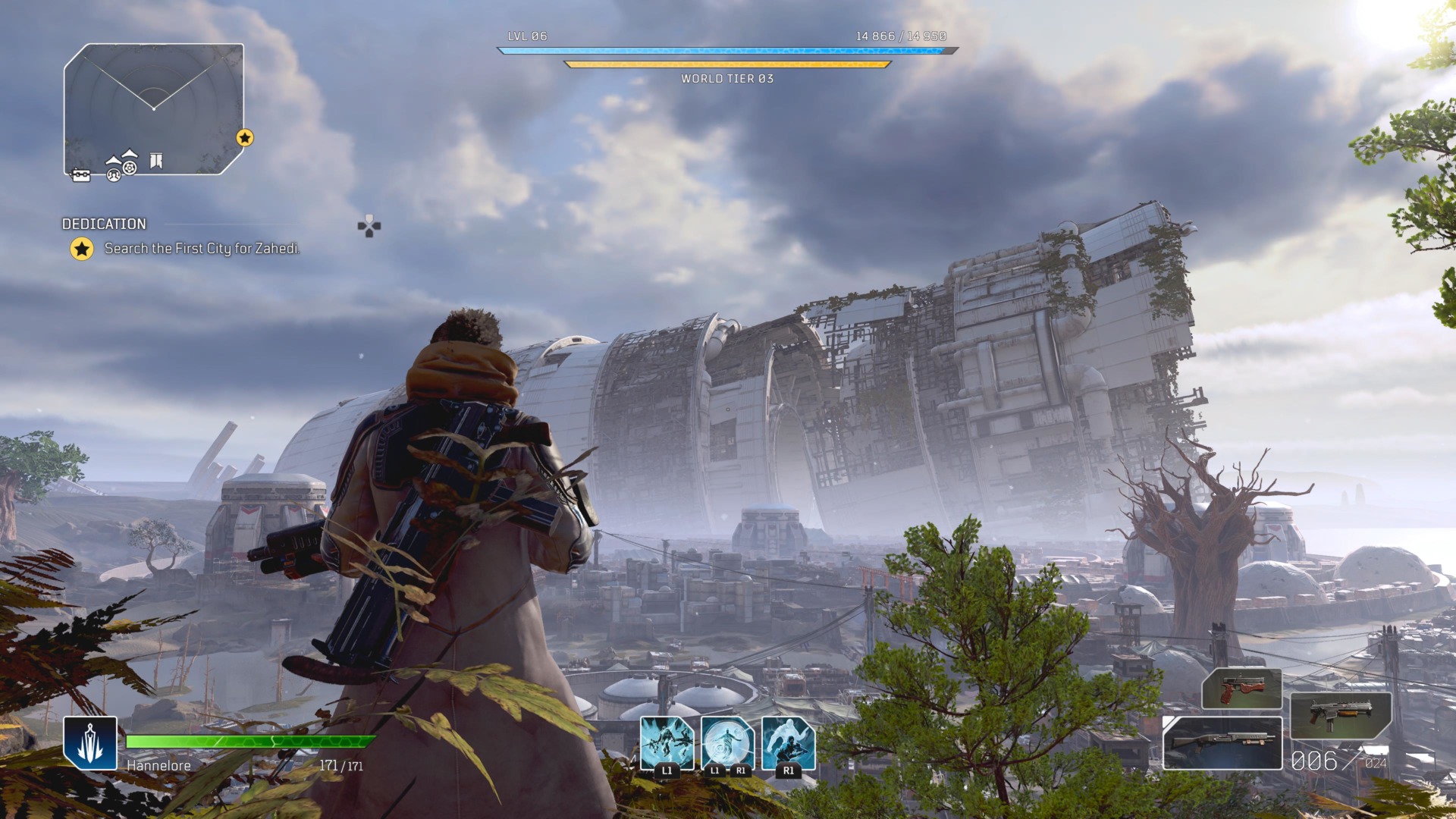 When the Outriders demo released in March 2021, I perked up when I heard that it’s a cross between Destiny and Gears of War with maybe a little Mass Effect thrown in. I’ve never played Destiny, but anyone who knows my gaming history knows how much I love the latter two. I knew it was a Square Enix-published title, but when I saw People Can Fly as the developer, I was all in on the demo. I maxed out four classes of characters in that trial and unlocked the highest world tiers available. I could not wait for the full game to release. Even if Outriders is just another post-apocalyptic cover-based shooter with little to no story, I was going to be fine. The hilarious dialogue and super power-mechanics were too fun to not love. However, People Can Fly didn’t let it stop there, and the studio really could have. The team crafted an amazing world full of beauty, horrors, and absolute sadness for players to get lost in between shootouts.

The premise of Outriders is relatively simple. Earth was in chaos, and two ships carrying the last humans set out for the distant planet Enoch to settle. However, only one ship survived, and that one ship carried only a few Outriders, the team responsible for exploring the planet and ensuring its relative safety for humans. Naturally, something goes wrong, and the player character is thrown back into cryo only to wake up 30 years later in a scenario from Escape from LA. However, this time the whole planet is that version of Los Angeles. There are also storms that initial landing crew called “The Anomaly” that will either kill people or give them super powers. Guess which the Anomaly Storm does to the player character.

From here, the player is tasked with trying to help the last sane semblances of humanity on the planet as well as find a way past the storms, which have them all trapped in a valley. Outriders thus becomes a mixture of shooting-all-the-bad-guys and mystery solving. What are these Anomaly Storms? What causes them? Why did they see no evidence of this threat back on Earth? Is it possible to leave the valley at all? Is Enoch doomed to the same fate as Earth? 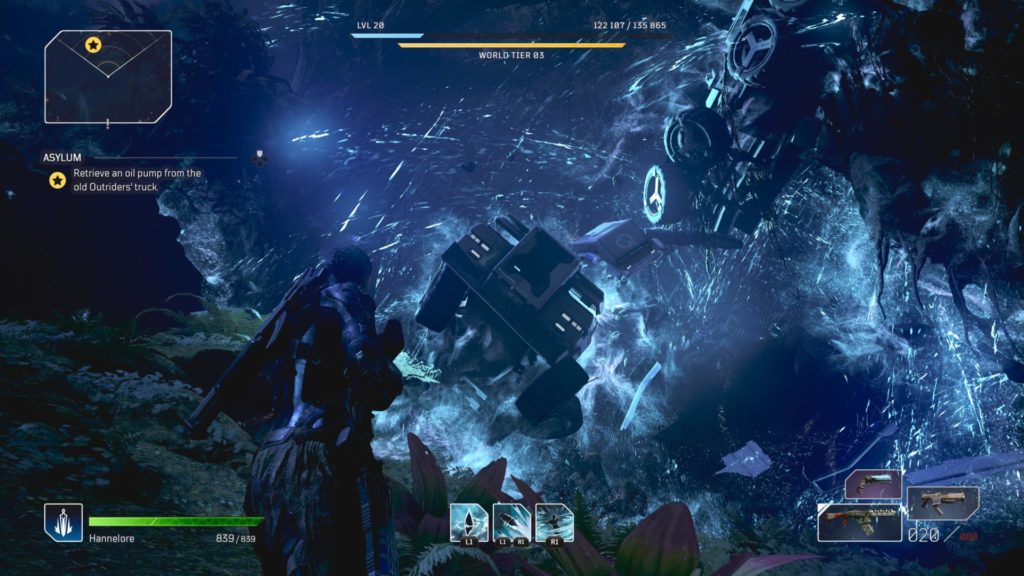 That’s something you don’t see every day.

The main story is great on its own, but it’s the sidequests that really paint the bleakness of life on Enoch. Just when I thought this world couldn’t be any worse, something else happily comes along to prove me wrong. It’s not bad enough that the planet is trying to kill everyone, but the lengths people will go just survive a day longer than others are often brutal. And incredibly sad. What’s even sadder is that it’s easy to see how our own societies could break down to these heartless and savage levels.

But, as I mentioned with the demo, it’s the gameplay that takes front and center for this show. Most everything about the gameplay is customizable to suit individual styles. The four classes available are the tank Devastator, the Pyromancer, the support-build Technomancer, and the horribly named Trickster. Since most of the Trickster’s abilities involve altering space and time, I have no idea why they weren’t called Chronomancers or something similar, but here we are. With each class, players can build out between three different skill trees that bring a particular focus for the class. Unfortunately, since the game only goes to level 30, there are only enough skill points to fill out one tree. However, you can reset the skill tree at any time, not to mention that there is no rule saying you have to stay in one branch the whole time.

For instance, when playing solo, I set my Trickster as the Reaver sub-class, which focuses on using powers to take down as many enemies at once. All of the skills gear toward increasing ability power, keeping the shields in place, and breaking enemies’ resistances to skills. When I play with others, however, I immediately go to the Assassin sub-class, where I jump across time and space to sneak up on snipers, kill them in one shot (usually a shotgun), and then magically teleport back to where I was. 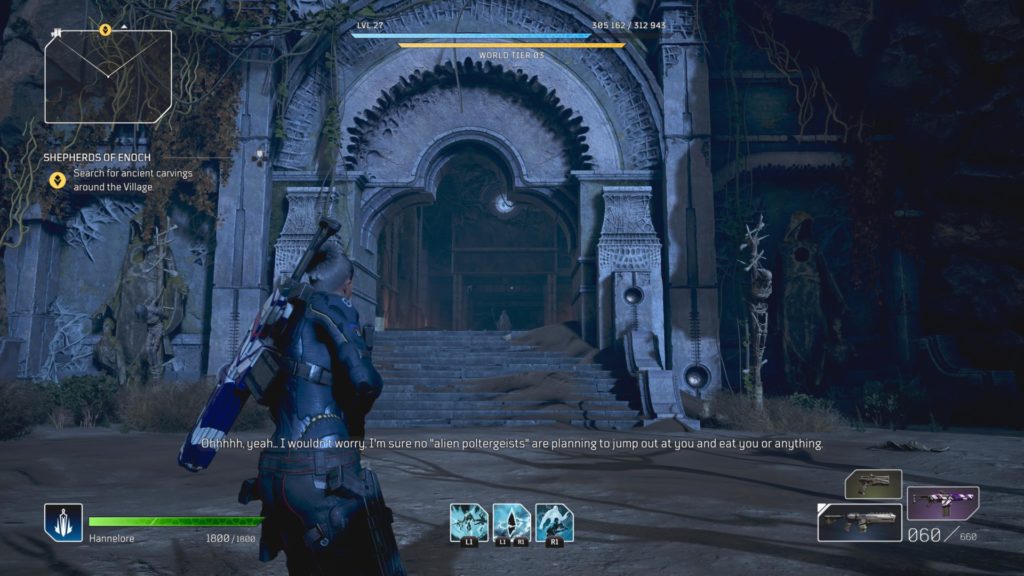 You can also switch out skills whenever you want as well. I typically had one skill loadout in mind for human enemies and another for beasts. I really wish that Outriders allowed for set skill loadouts that you could swap on the fly. Now that I write that, I wish there were customizable sub-class loadouts as well.

The gunplay, however, needs some work. Aiming goes from helpful aim-assist to complete air-balling. The aim reticule is a tiny dot as well, and it’s so easy to lose track of where it is. In addition, since clicking the left analog stick down is used for both sprinting and swapping aiming stances, it’s easy to accidentally suddenly change which side you’re aiming from. When you’re up against a captain in a higher world tier, that slip-up can easily cost you the battle.

The shooting mechanics aren’t the only elements that need polish, unfortunately. A lot of things were minor, such as my character standing nowhere near a gear she was turning or objects floating in the air that weren’t affected by the Anomaly. Sometimes, though, the problems made progressing or just navigating around tough. Like many games, some areas cannot be passed through without killing every enemy that spawns. It’s just so much fun when one gets trapped in a wall and you can’t shoot them. You can’t even back out of the area to fast travel somewhere else to reset it. The game still considers you in the middle of battle, therefore, you cannot leave. Instead, you must quit and restart.

The biggest issue I had that flustered me to no end every time it occurred dealt with quest tracking. Sometimes if you switched what quest you were tracking, the in-game mini-map wouldn’t update where to track. It would say you were tracking this new quest, but the directional markers pointed to the old quest. If Outriders had a detailed in-game map that showed where you were in an area, not that you were just in an area, or if the mini-map had any compass capabilities, this would never be an issue. A minor annoyance, maybe, but not really a problem. Sometimes fast-traveling to a different marker would reset it, and sometimes it did not. Too many times I had to open the full map, try to figure out which direction to go, wander to the next area, pull up the map again to see which area I now was in, rinse, and repeat. 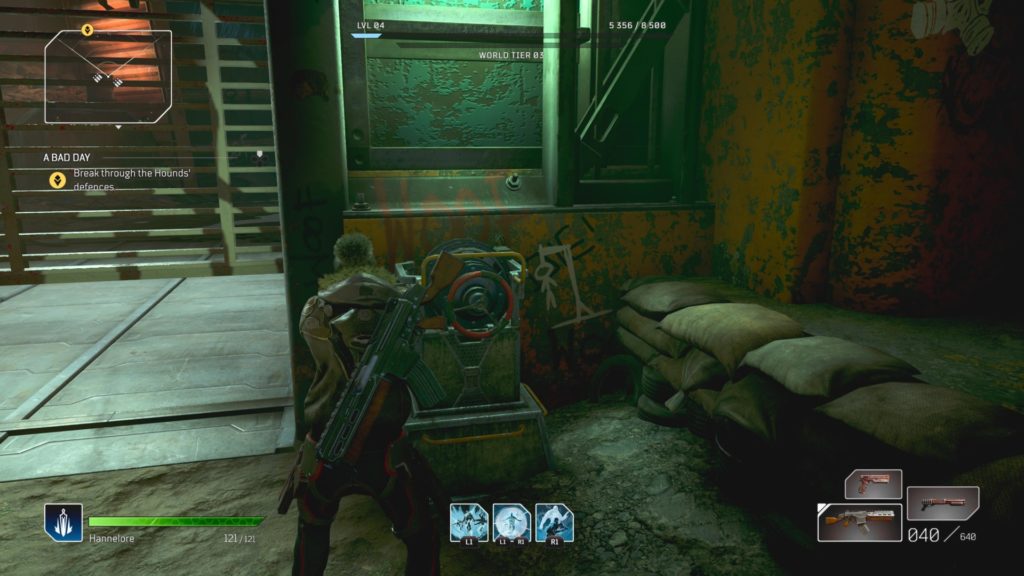 The wheel is to the right, sweetie.

Even with these problems, I had an absolute blast in Enoch, and I still am. The game doesn’t end when the credits roll, and there’s still so much left I can do. Not to mention, I could always re-roll another class. With all that though, I somehow don’t think People Can Fly is done with Enoch just yet. There is so much potential in this world, and it will be exciting to see what comes next.

Outriders is available for PS4, PS5, Xbox One, Xbox Series S|X, and PC.

Outriders is a 1-3 player co-op RPG shooter set in an original, dark and desperate sci-fi universe. As mankind bleeds out in the trenches of Enoch, you’ll create your own Outrider and embark on a journey across the hostile planet. With rich storytelling spanning a diverse world, you’ll leave behind the slums and shanty towns of the First City and traverse forests, mountains and desert in the pursuit of a mysterious signal. Combining intense gunplay with violent powers and an arsenal of increasingly twisted weaponry and gear-sets, OUTRIDERS offers countless hours of gameplay from one of the finest shooter developers in the industry – People Can Fly. PS5 version reviewed.
8