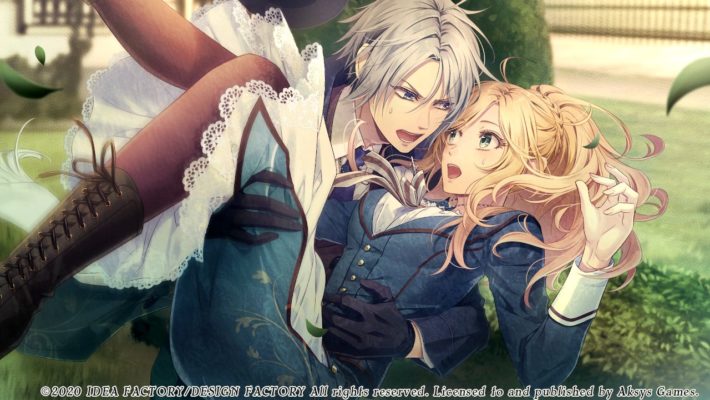 As much as these endings shocked and disgusted me, I couldn’t imagine a better fit for a game that involves a church-raised orphan and the Mafia in 1920s Italy. If anything, these endings were quite accurate for the time period, and they’re ones that will stick with me forever. I’ve never said that about an otome before, and I doubt I’ll say that for another. If you’re looking for an otome that is definitely not like any other you’ve played, welcome to Piofiore. It’s so dark, it’s actually refreshing for a game of this genre. 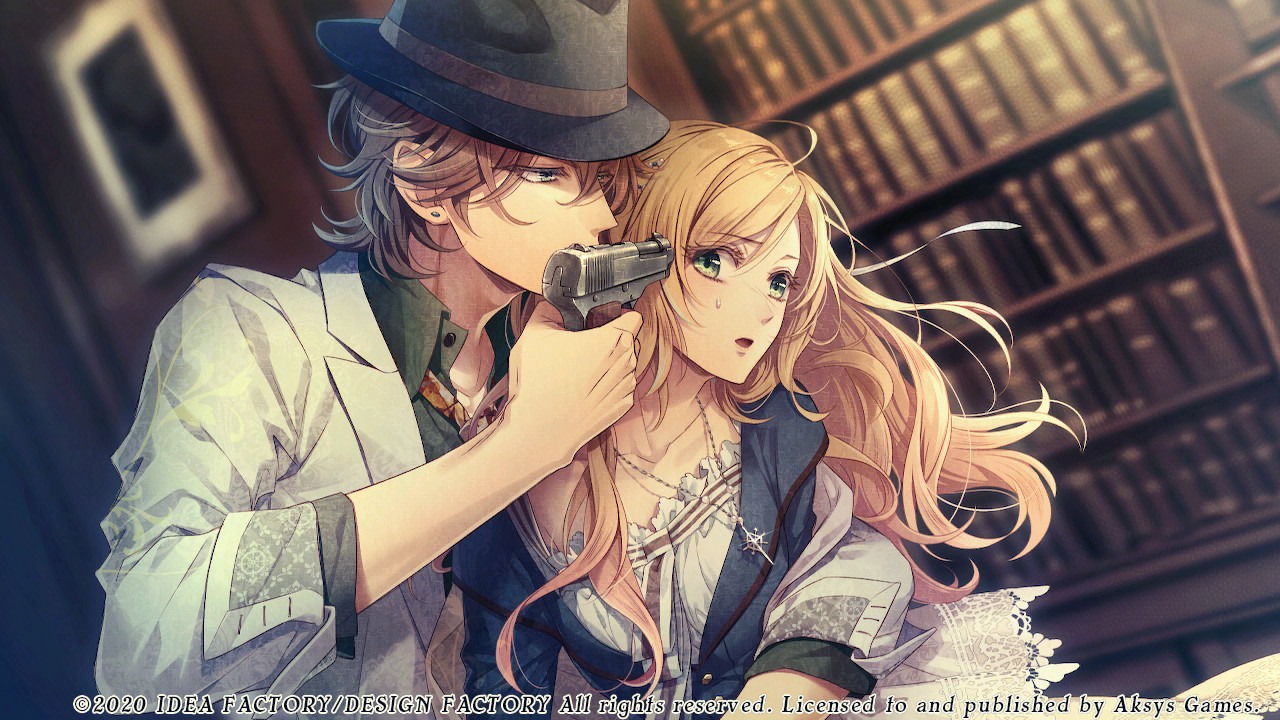 Let’s be honest. Would a Mafia story run any other way than with a gun to the heroine’s head?

The dark themes are not the only ticks in the plus column for Piofiore. The game has several, but the most important one is that it has a deep and captivating story. There are few things worse than a visual novel with a terrible story, especially since the gameplay rarely involves anything beyond reading. As previously mentioned, Piofiore: Fated Memories stars a church-raised orphan who gets entangled with the Mafia. Lilliana Adornato is your typical orphan from 1925 Italy. She’s beautiful, everyone loves her, and she has a dark, distinctive mark of a saint on her breast. Yep, just your ordinary 1920s orphan.

She’s also tied to a mysterious legend in the fictional town of Burlone, which happens to also involve the oldest Mafia Family in the town, the Falzone Family. But the Falzone aren’t the only ones in play to try to control Lili and the legend. There’s also the Church itself, the rival Visconti Family, and the Lao-Shu, an Italy-based cell of a larger Chinese gang. They’re all mixed in for several different reasons and, like any true otome, you won’t entirely unearth every facet of it without completing all of the Best Endings. I really can’t go into the story more without spoiling it, and trust me, you don’t want me to do that. 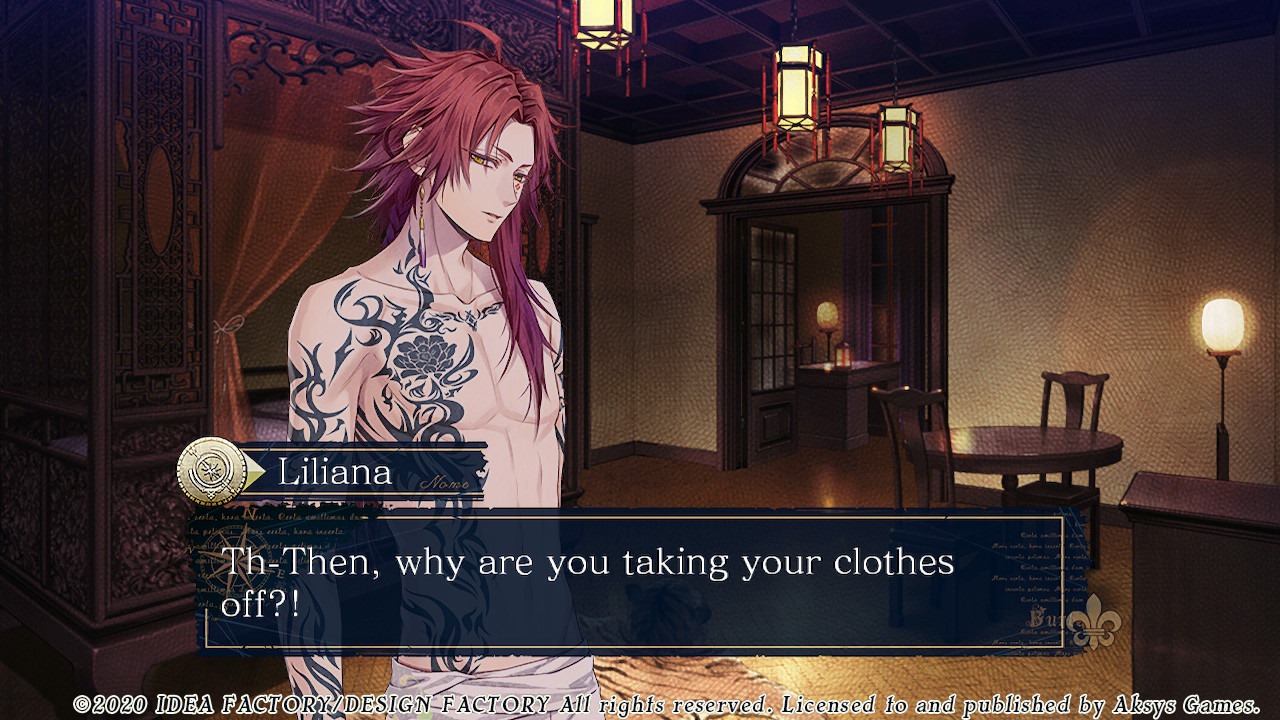 The three endings for each suitor’s route (Bad, Good, and Best) unlock depending upon the choices the player makes for Lili. The choices determine the level of Affinity with the suitor and send you down a particular path. That’s nothing new, but having high Affinity isn’t enough to unlock the Best Ending. Each character has a secondary attribute that the player must also score highly in too. None of them have the same one, and as such, it greatly affects your choices. For example, Nicola’s Best Ending requires high Affinity and high Honesty, whereas Orlok requires high Affinity and high Tolerance. It’s a subtle difference, but it will change how to approach a choice. Taking this example, answering Orlok honestly can lower this rating or even send you straight to a death ending. With him, he sometimes takes honesty too literally and acts upon it to the detriment of Lili. Dante Falzone, on the other hand, requires respect. As the head of the Falzone Family, it’s natural to think he’d desire that over anything else. Since Yang has psychotic tendencies, honesty and respect do nothing for him. Instead, Lili must be wise in how she handles him.

The player can check on the status of their relationship with the character at any time, although it won’t be as clear as you’d like. 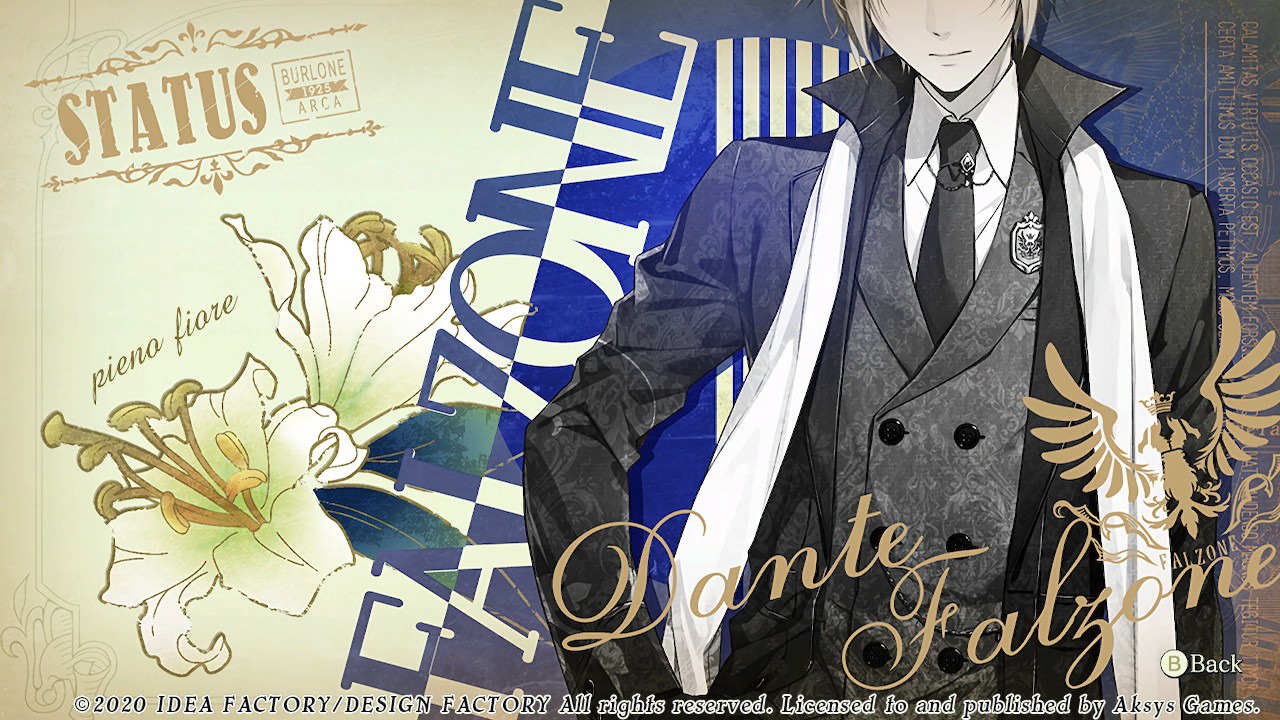 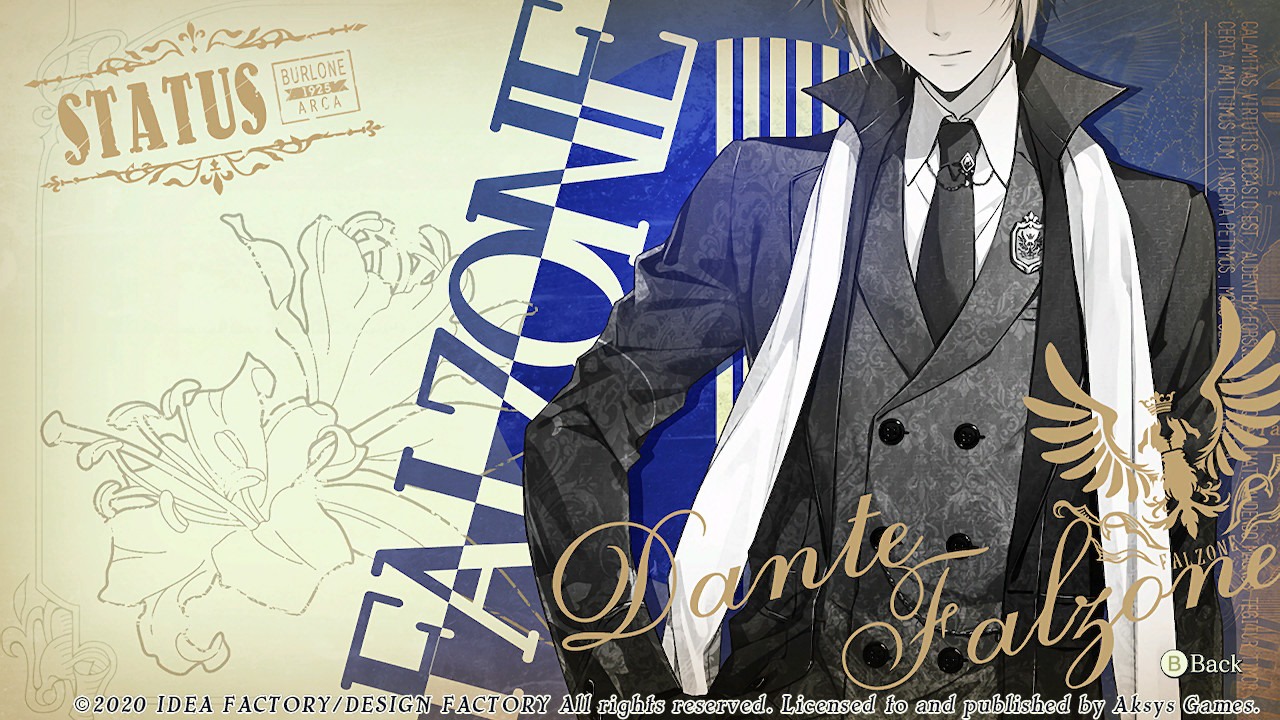 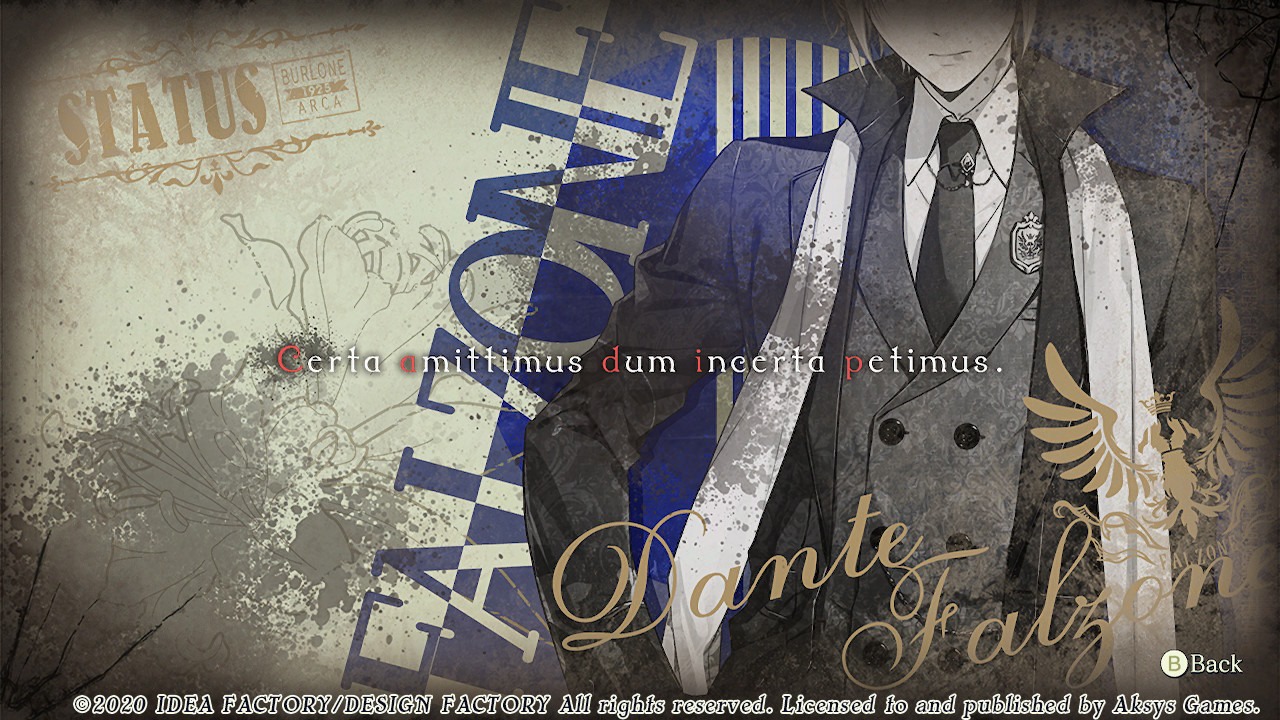 It goes without saying that Low Affinity and secondary attribute will lead to a Bad Ending. In fact, Low Affinity and High secondary attribute will also lead to a Bad Ending. It is so difficult to get the Best Ending or even the Good Ending on your first try, that I was convinced it was impossible to get anything other than a Bad Ending your first time. It wasn’t until I unlocked the Best Ending with Orlok on my first try that I knew it was possible. I’m just really bad at this, I suppose. In addition, there is one character where one false move will send you to the Bad Ending or kill you immediately. I feel like it’s the game’s way of saying you should not be in love with this character, he’s bad and you should feel bad. However, you need to complete the Best Endings for four of the characters before you can unlock the route for the fifth. And then there’s a Finale route you can only unlock after completing all five Best Endings.

I’ve danced around this enough, so let’s talk about how bad these Piofiore Bad Endings can get. Only one of them leads to the heroine’s death at the conclusion of the story, and that one is probably the kindest of them all. Another has Lili in an abusive sexual relationship. Another has the suitor chained in a cell with Lili getting raped nightly. Her Achilles tendons were also cut so she can’t escape. I’ll spare you the others. To be fair, though, considering mobsters are involved here, these endings fit well within the Mob’s idiom. 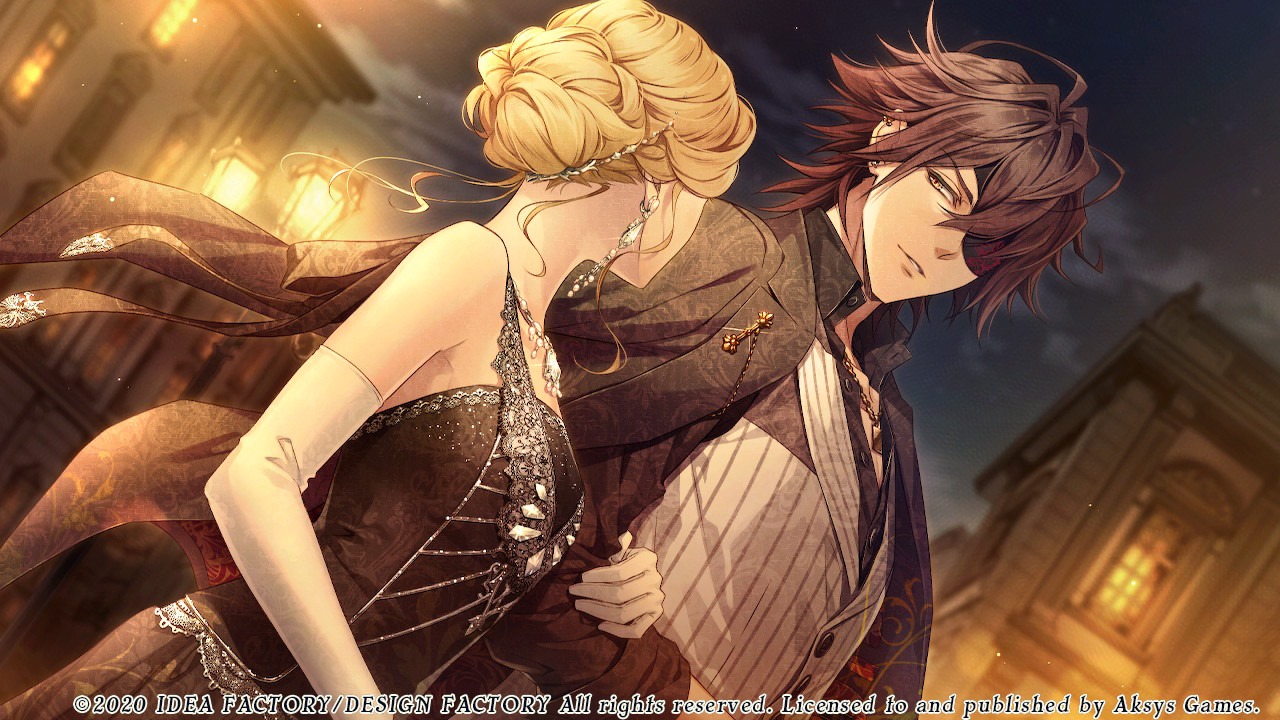 If otome games are your jam, then you’ll pick this one up regardless. However, this isn’t your typical otome, and you’re in for a real treat with these characters, the setting, the art (look at her dress up there!), and story full of twists and turns. Highly recommended to friends and family.

Piofiore: Fated Memories will release on the Nintendo Switch on October 8, 2020.

When a church-raised orphan falls into the middle of a Mafia turf war, what else is there to do but fall in love? Her encounters with the leaders of the Falzone, Visconti, and Lao-Shu mafia lead to danger and distraction. It's an incredibly mature otome from the masters, Idea Factory and Aksys Games.
8