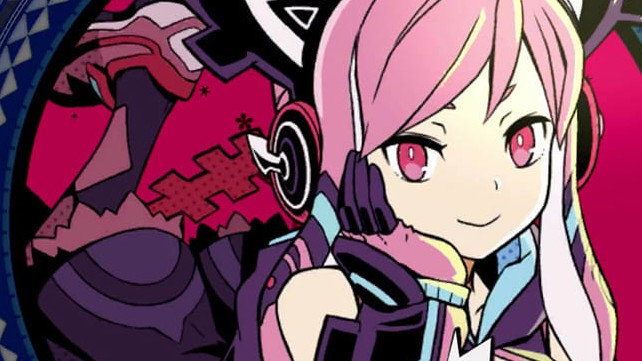 Every once in a while, NIS America releases a title that doesn’t quite seem like its other games. For example, Penny Punching Princess and The Princess Guide qualify. Now, Poison Control is the latest game to join that line, with its poppy character art, soundtrack with a few great bops, and supernatural premise. However, like its contemporaries, it can feel like it meshes too many different gameplay elements together and, in so doing, doesn’t get a chance to do some justice.

You’re in Hell. Why? You don’t know. And not long after being there, a Klesha attacks you, steals your body, and becomes your new Soul Mate called Poisonette. If you work with her to help purify Belles’ Hells, you might get to go to Heaven! Except there’s another girl with her own Soul Mate with the same goal. Making Hell a better place and saving others from your fate could give you a way to a better life too, which means you have to get to cleaning up the joint. 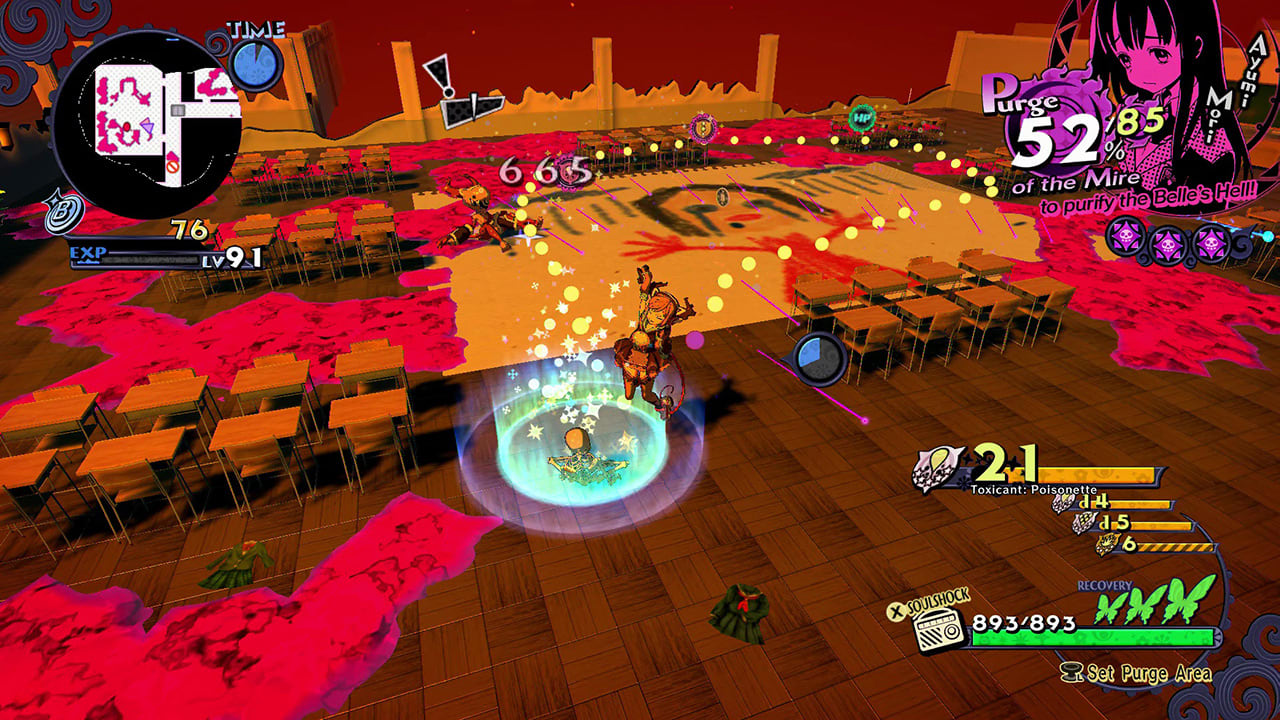 As you might imagine from the premise, Poison Control is a game with a lot of dark situations. The women who find themselves in hell are all suffering in various was, and there are some genuinely heartbreaking situations. You also learn pretty early on that even if you do make a difference in someone’s life, perhaps deterring them from a path where they’ll hurt innocents, other influences could still guarantee they’ll be back. Kikiri and Midori basically flat out imply some people will be back during the Higan Radio segments that bookend levels. While there are lighthearted elements and black humor, it’s a game that doesn’t play around with heartbreak.

Poison Control is essentially a collection of brief stages with objectives that fall into varying categories. The most common is to purify the poison in one of the Hell’s Belles’ area to a certain degree. Entering certain spaces can cause enemies, known as Kleshas, to continually spawn until you fulfill an objective like defeating a certain Klesha or eliminating a certain amount of the mire. Eventually, you’ll find memories of the Belles or people who knew them to advance their story and alleviate a situation so you can get a sticker, which can set you on the path to getting more stickers and eventually get you to Heaven for your wish. There are also occasional boss fights. 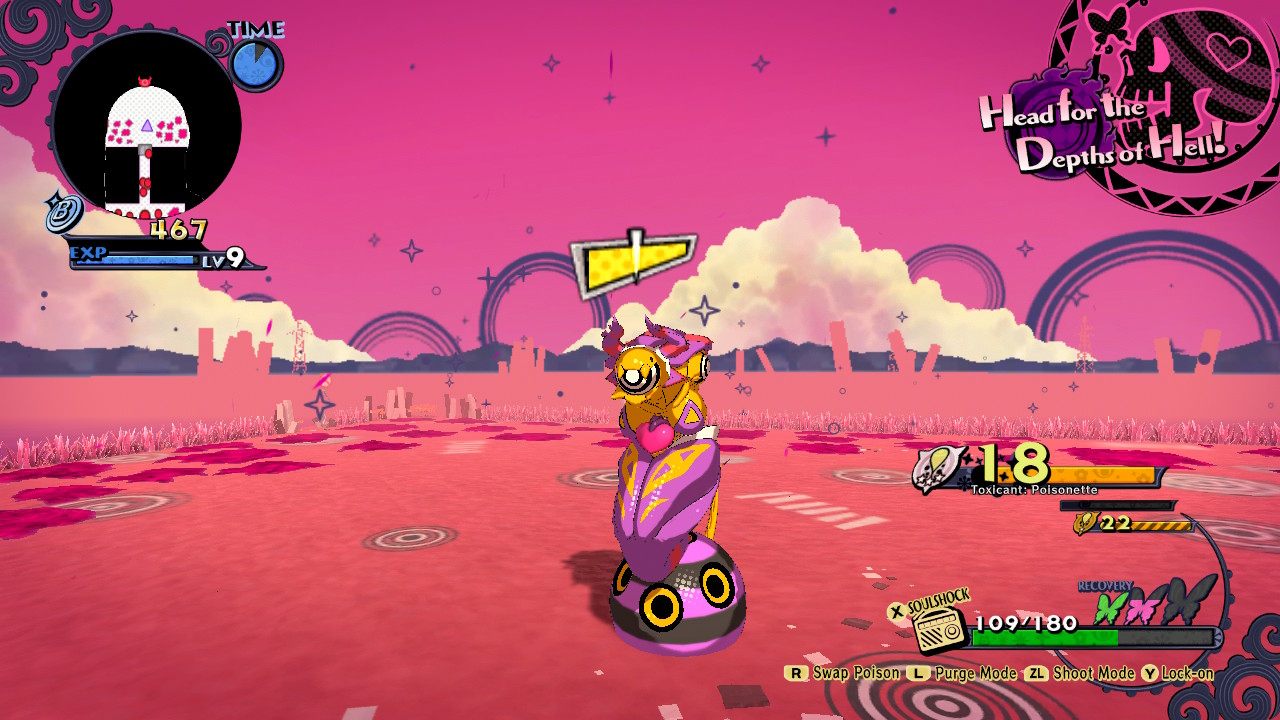 In some ways, Poison Control is a game with some pretty interesting elements. Since you and Poisonette share a body, you have to be careful when switching to her to purify an area. She can only travel a certain distance from you and encircle so much space, which is shown by an indicator above her. Also, if an enemy hits her, all the work is undone. You can quickly clear a straight line of poison by sending her out, but it is better to encircle the muck. This can do a minimal amount of damage to an enemy inside the circle and damage them. Not to mention, clearing the hazard can do things like get you bonuses, restore your health, and cause treasure chests to appear.

And it’s at its best when it is doing that, because the actual shooting portions of Poison Control aren’t all that fun. It’s a standard third-person shooter. You start with one kind of poison bullet, and you have to acquire more by successfully exploring Hells to get more. Each have certain amounts of ammo and power levels, which can improve if you invest money in them. All of them leave you defenseless while they recharge if you use bullets up. And since enemies tend to respawn, you can be left defenseless even if you are investing and earning better bullets. The shooting is functional, but more tedious than fun. And since most of enemies you encounter feel rather generic and like they’re only a threat when you are prone, you don’t get that sense of accomplishment unless the mission that time was to defeat a certain foe or X number of opponents. 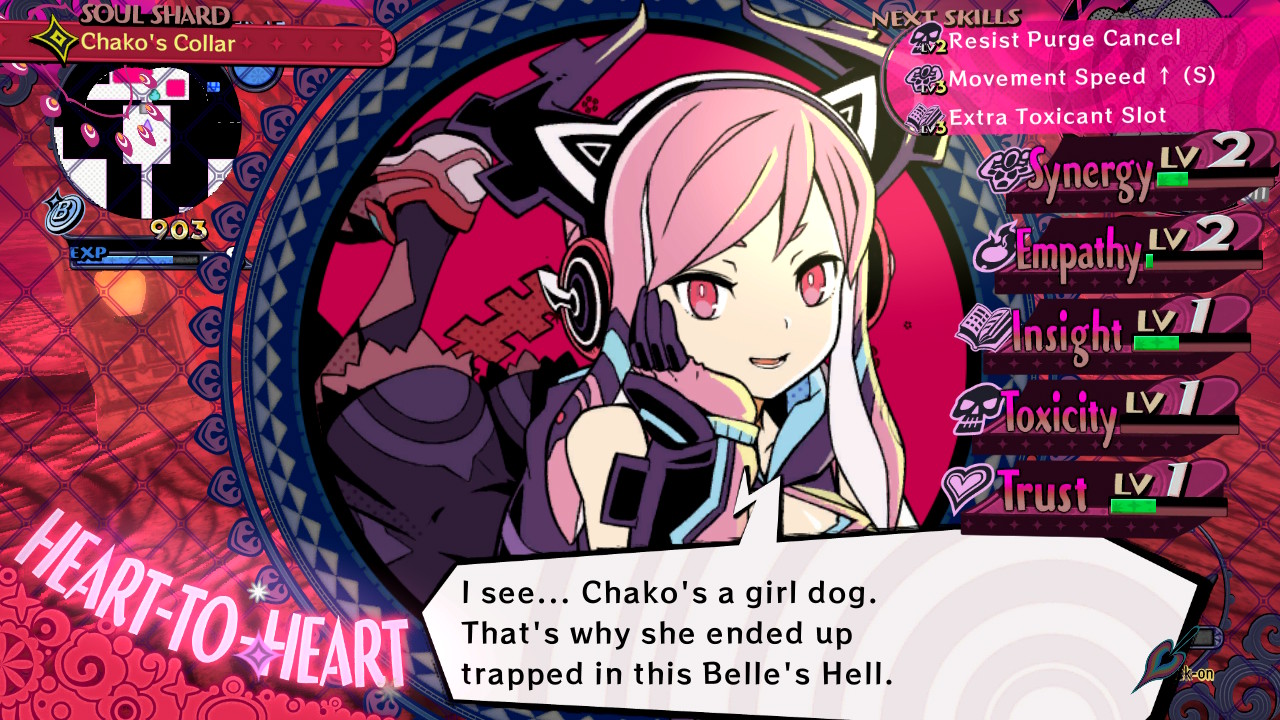 Where things really get interesting is the way in which you shape your relationship with Poisonette. Like the NIS America game The Princess Guide, Poison Control has some character-raising functions. While this shapes the ending, it also determines your abilities as you play by choosing how you respond to situations when talking with your Soul Mate. Empathy, Insight, Synergy, Toxicity, and Trust can all be altered during Heart-to-Hearts, which determine your skills and how much you can equip. Once you make a choice, that’s it even if you go back and replay the level. But it offers a bit of connection and can make things feel like they’re changing for the better.

Poison Control feels like the sort of game where lots of different elements are tossed together in a way that hopefully comes together and makes sense. Some parts are fine. Eliminating poison can make you think, though it can sometimes get to be a bit of a chore. I liked the Heart-to-Hearts with Poisonette a lot, as it let me see how the duo would grow. The shooting is sort of there. It wasn’t an attraction or anything revolutionary, but I suppose I liked seeing what sorts of equipment I’d get from new Belles. It’s an interesting idea, but some elements are executed better than others.

Poison Control will come to the Nintendo Switch and PlayStation 4 on April 13, 2021 in North America, April 16, 2021 in Europe, and April 20, 2021 in Australia. It is available in Japan as Shoujo Jigoku no Doku Musume.

Spirits are being trapped in poisonous manifestations of their despair, and only Poisonette and her Soul Mate can purify them! Venture through the different Belles' Hells to defeat enemies, learn the stories of fallen souls and other Poisonettes, and fight your way to Heaven in this stylishly twisted action shooter! Switch version reviewed.
6