Sega has been raking in money with rhythm games like K-on! After School Live and their popular Hatsune Miku: Project Diva series. Yes, the vocaloid idol is coming to the 3DS, but before her debut Sega will introduce a new franchise called Rhythm Thief & The Emperor’s Treasure. The game is a blend of Rhythm Heaven and the Japan-only DS game Phantom Thief Rousseau. 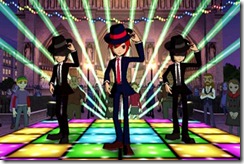 A demo released in Japan lets players try four different mini games. The first one has Raphael, a famous thief from Paris, dancing with other sharply dressed characters. Players swipe up, down, left, and right to make Raphael keep up with the song. Each segment ends with a twirl, which has players draw a circle. Stay on beat and you’ll get a high score.

The next mini-game takes place during one of Raphael’s heists. He’s sneaking through a museum and you have to tap one of four buttons on the touch screen to make him hide behind statues. You have to listen to the beat plus pay attention to the top screen to see what kind of pose to make. The song begins with one pose (standing straight) and gradually introduces the other three. When you clear a segment, Raphael taunts the museum guards by walking right behind them before the song continues. 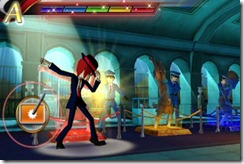 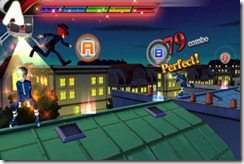 In the third mini-game, players have to escape the police by running across Parisian rooftops. This game only has two buttons – A to jump and B to slide. Once you escape, Raphael has a scuffle with an unknown enemy. The controls change for the fourth scene where you make Raphael punch by either pushing A (for a right punch) or B (for a left). Enemies appear from both sides so players have to pay attention to the rhythm and top screen to know where to punch.

At least in the downloadable demo, Rhythm Thief & The Emperor’s Treasure uses different controls for each song, which makes the game feel more varied compared to say Theatrhythm: Final Fantasy’s tap and swipe system and more like Rhythm Heaven. The difference is, Sega’s game has an overarching story about Raphael’s missing father and some secret about Paris that unravels with anime cutscenes. The mystery was, of course, not spelled out in the demo.

Rhythm Thief & The Emperor’s Treasure comes out for Nintendo 3DS in North America in early 2012.