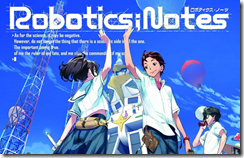 5pb is bringing Robotics;Notes, the third game in the popular science adventure series, to PlayStation Vita. Robotics;Notes follows Kaito Yashio who is in the robotics club and Akiho Senomiya, the president of the club. They work together in this game to build a giant robot called Gan-tsuku.

Robotics;Notes was released for PlayStation 3 and Xbox 360 last year. The game will be available for Vita this winter.