aka Castlevania Dracula X: Rondo of Blood outside of Japan.

With Hallowe’en fast approaching, there’s only one series in all the realm of game-dom that is gothic enough, vampire-laden enough, and devilishly difficult enough to put you in the Pagan holiday spirit. Castlevania, or Akamajou no Dracula in Japan, snared instant hallmark status back on the NES, where the series enjoyed three outstanding appearances. A game chock full of (sac)religious references and effigies, replete with the unholy denizens of the night led by Transylvania’s most notorious resident, Castlevania was ever the more visible amongst the family-friendly bulk of its 8-bit brethren. Perhaps it was by virtue of Nintendo’s bedfellow-ship with Konami – which, in turn, could be assumed was a direct result of the company’s proven earning power – that such a game won the American seal of approval, when games such as the Big N’s own Devil World were stopped at the Famicom. Whatever the reason, that crucial clearance started a success story now 17 years old and counting, and while all instalments are acknowledged as sharing a rarely-seen calibre, not all of them have met with the relishing reception of the Japan-only, Turbo Super CD-ROM entry of 1993.

Akamajou no Dracula X: Chi no Rondo is the most-loved of the earlier action-over-adventure breed of Castlevania games, if not of the entire line, and with good reason. The title pays mass homage to its cartridge cousins with reprisals of the infamous musical themes and level designs ripped right out of the Castlevanias of yore, while introducing some never-before-attempted, frighteningly clever ideas. Many generations down the Belmont line, the dashing young Richter from Castlevania IV is once again compelled to make the trek to Drac’s house by not only the curse of his bloodline, but a personal affront – the kidnapping (and/or sacrifice) of his lady love (and/or her kid sister; it’s hard to discern since the game is all in Japanese, save the German intro where all this goes down). As with every such trip, the tried-and-true guts of the gameplay are unchanged, as you whip your reanimated foes into submission, collect sub-weapons to make life among the undead easier, and platform-hop your way through stage after sprawling stage of crumbling causeways, secret staircases, and haunted interior decor. Making her debut as a playable character this outing is Maria (I think?), whose experience, should you choose her, will differ vastly from Richter’s due to her unique play style. The game’s most brilliant innovations, however, come in the form of the gruelling bosses and your means to put an end to their vampirous ways.

As a game for the CD-ROM attachment of the ‘16-bit’ PC Engine that was, in reality, a doubled-up 8-bit machine in disguise, Chi No Rondo (dubbed Rondo of Blood here) still beats the coattails off its predecessors (and some of its descendants) in looks, sound, and size. Break out the garlic-flavored popcorn, ‘cause you’re in for quite a show – with the advantage of CD storage on Rondo’s side, the colors are striking, the animations plentiful, the detail meticulous, and the music absolutely shreddin’ from start to bloody finish. Thrusting you into the thick of the action right off the chariot in the prologue, screenshots really can’t capture the visual feast of this game in motion. Stills can, however, provide a gander at the stage backgrounds, which exhibit some of the proudest 2-D architecture in a video game – watch out for the church background in stage 3 for proof. The plentiful mid- and level end bosses are huge and unpredictable in their attack patterns, their suspenseful entrances and exits (in which, with their final breath, they always muster one last vengeful effort) a real spectacle to behold. Narrated anime cutscenes highlight the action splendidly along with the scant in-game voice clips, and, although not quite up to par with the capabilities of the times’ other CD-ROM attachments, Konami really maximizes the FMV-free approach to storytelling on the NEC hardware. And as for the soundtrack? Rock on Richter! Organ and guitar arrangements of the previous game themes heighten the sensation of the game’s night frights. Rondo comes from the days that developers nowadays need to remember: make the music audible again!

Although the series is steeped in tradition and the play mechanics have changed little since its inception, true fans ought to know that each hero of Castlevania has been endowed with slightly different corpse-killing capabilities. Richter, though truly kickass, is not the most versatile or manoeuvrable of the lot. But for this particular outing, he has been granted the ability to walk backwards (i.e., face the enemy while retreating), a midair backflip to reach higher platforms, and the all-powerful Item Crush (or, depending on which fan translation you read, Item Crash). At the cost of 10 to a whopping 30 hearts depending on sub-weapon, Richter can invoke its specific kill-all move, and not only are these graphically awesome, but an absolute must-use for survival. The smaller Maria, or nameless-heroine as she might well be called, uses doves to attack and the Four Beasts of Chinese mythology as subs, and while she has a little more offensive and evasive potential, she suffers from lower constitution.

But no matter – see that little counter with the skull on the main menu? That’s how many continues you’ve used. Whoever you choose, one thing’s for sure – that number is going to be a lot higher at the end of the game. In typical Konami game fashion, Rondo is very, very hard – which becomes one of its largest demerits for the not-so-occult-savvy. That said, some of the harder segments of Rondo’s stages, that see cunning enemies flung at poor Richter incessantly amidst spiked floors and endless pitfalls, and almost every boss will make even world class vampire killers cry. Multiple paths to complete the game only make the challenge greater – getting 100% is no easy task. Steel yourself by buying the boss fight demos, as soon as you can afford them – showing you a flawless victory at the cost of your hard-earned moneybags, this is one of the few amenities afforded to take some of the drama out of your destiny.

All in all, Chi no Rondo was a groundbreaking 2-D game in its time, and will still delight those most hardcore, iron-willed gamers with about 5 hours to kill. For me, one mostly unschooled in the whip-wielding arts, the verdict is this – I could never give my heart to Richter and his game, because it would always break it every 5 minutes. Its beyond-ridiculous challenge is the only nail in Dracula’s coffin, but unfortunately, that blemish on an otherwise masterful game limits me to a single playthrough… at least, until Hallowe’en rolls around.

+ Pros: A wowing effort in all the right ways – unbeatable graphics and sound, and, despite the typically slow Castlevanian pace, a great example of tactical, methodical action.

– Cons: Ever have a nightmare about a video game, but not because it was scary, just…. hellishly hard? If you answered no, it’s time you joined we who have, and with Rondo’s baptism of fire, your club membership is in the mail. 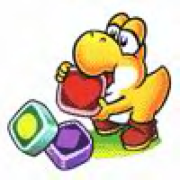 Katie
A longtime game fanatic, whose glory days pretty much faded with the 16-bit era. A (sort of) reformed SEGA fangirl, new games will sometimes catch my eye, although my happiest gaming years were from the NES to the end of the Playstation/N64 - a fact that ought to be thoroughly reflected in my retro writings. Writing is really a wonderful way to appreciate games more, though, because with writing you can talk up the best parts of the game and give it new meaning for yourself, and hope you're reaching someone in the process. My MSN is [email protected]