Join Jin, Mugen and Fuu on a journey to find the samurai who smells of sunflowers in Namco Bandai’s Samurai Champloo game. However you won’t be replaying parts of the anime series, instead Sidetracked acts as a lost episode to the series. Being broke and hungry as usual the trio jumps aboard a ship to Ezo where they encounter a witch, ninja trained monkeys and a whacked out video game dream. Only Grasshopper Manufacture (Killer 7) could produce a game that accurately represents the series so well. 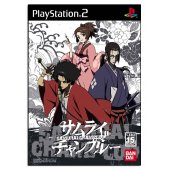 Start out by picking either Jin or Mugen as the character you want to try out. Mugen mixes up breakdancing with swordplay for an evasive and wild style compared to Jin. Instead of bouncing around all over the screen Jin is more reserved. He’s slow moving and only has a dodge roll to evade attacks. Both samurai are governed by the rhythm track combo. Displayed on the top of the screen are a set of commands outlining what combo options are available and when you can add in a heavy attack by pressing triangle. If you don’t like the combo tree or want to change the background music, tap the right analog stick to switch records. As you slice your way towards the end of the level the tension meter builds up on the bottom of the screen. When the gauge is nearly full your combo meter will extend by a few hits and a combo path will be outlined in red. Land that combo and Jin or Mugen will enter hyper mode where they can launch a barrage of quick slashes. Hyper mode gives you a clear edge against bosses and lets players quickly clear the screen of enemies.

As you continue to execute combos the tension gauge will fill up and the little man will start dancing. Soon an enemy will appear with a star over his head, strike this enemy to enter the button mashing tate mode. In a couple of seconds players need to get one hundred button presses to enter trance mode. Trance mode is sort of like a bonus stage. For a brief period of time the background disappears, the music switches to happy hardcore and all of the action appears behind a shoji screen. Each shadowy enemy only takes a single hit to kill and killing one hundred enemies unlocks a new weapon to purchase. Sidetracked allows players to tryout dozens of weapons, but nearly all of them function just like a standard katana. The only variable is how much damage you give.

We spent a lot of time talking about the combat system because that’s the majority of the game. As soon as you jump into a new area ninjas, rouge samurai and talking monkeys will appear to fight. If new enemies didn’t pop up immediately the levels would seem quite short. However, you won’t be able to avoid combat by dashing to the boss. While on your journey you need to pick up kobans that are dropped by fallen foes. Kobans can be traded for passage through the barriers scattered around the level. At the end of each stage all remaining kobans are traded for cash, which means there is no way to get through a stage without plenty of combat. Most of the stages in Samurai Champloo: Sidetracked are 3D levels with little room to move. One level has players navigate through a sewer, but that’s the most exploration you’ll get besides walking around the town. There is also a level, clearly inspired by Super Mario Brothers, where Mugen will run around side scrolling style.

Each stage ends with a boss waiting for you. Early on the boss fights are extremely easy, where a few bursts into hyper mode will end a fight. Then without much warning the boss fights become near impossible to complete without dying. One stage has you do battle against an Oni. This is the first fight where you’ll have to think about dodging and using technique counters to protect yourself. Also the only way to defeat the boss isn’t conventional slashing of the sword, but we won’t ruin the surprise. The next boss after that is the witch, who teleports and fills the screen with energy balls that can kill your character if you get trapped in the line of fire. Neither samurai is suited for darting through energy columns or running away from homing fireballs. To counter the game’s sudden burst of difficulty players will get a bonus of quadruple health if they keep continuing fights. When you get to the later levels purchase rock candy from the shops at the beginning of each stage. This boosts defense and will make the final fights easier to handle.

Except for the retro NES stage this sounds like any other samurai game on paper, but Sidetracked makes good use of the game’s license. The game’s starts out with an opening video, which is just like the anime’s opening except this shows off the 3D character models. The story has the offbeat humor like the later episodes of Samurai Champloo. Most of the voice actors from the series signed on to take on their role, with the exception of Mugen’s voice actor. However, the difference is hardly noticeable. Even though the game has an all new soundtrack, the new beats fit right in. Also the mini games are pretty amusing. One game is beetle sumo wrestling, where you bet on a beetle based on its physical condition. Once the battle begins you’re taken to a line art screen and the results of the fight appear like an NES RPG. The other game has players enter an eating contest with Fuu and it plays like tate mode.

There are some annoyances about Samurai Champloo that keep it from being a top action game. While the rhythm combo track is interesting, it’s shallow. There isn’t much to master, just hit the combo where hyper mode is highlighted. Also the game is pretty short, you can easily beat in a few hours if you keep continuing your way through. On the other hand there are three different characters to play if you want to go off and search for all of the art pieces. Of course its going to be fans of the series who are going to enjoy Samurai Champloo: Sidetracked the most, but action gamers who are looking for something a little different should check this out.

We had a chance to check out the US version of the game.

+ Pros: Sidetracked’s best attribute is how it sticks to the series. The rhythm combo track, trippy tate mode and storyline are pluses.

– Cons: It is only a few levels long and the repetitive fighting keeps Samurai Champloo: Sidetracked from appealing to a broader audience.

Overall: Samurai Champloo: Sidetracked has lots of elements that will appeal to fans of the series and action gamers who are looking for a twist on the hack n’ slash genre.