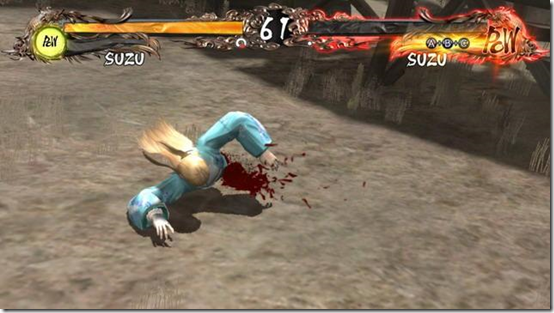 Seems like SNK Playmore is working on two versions of Samurai Shodown: Edge of Destiny a fatality free teen rated release for Japan and a carnage cut for North America.

The ESRB spilled the details on Ignition Entertainment’s version of Samurai Shodown: Edge of Destiny and it includes brutal finishing moves as seen in the E3 build.

The finishing moves represent the most intense part of the game: torsos can be sliced in half and sent flying across the pavement; severed heads will spew blood as they roll off screen; and chopped-off arms leave stumps from which blood does gush out. These depictions of blood and gore are relatively infrequent relative to the overall slash-attack/"move-set" gameplay; however, they do account for the Mature rating. During the course of the game, players can also follow custom storylines for the 24 characters: Some of the related text contains sexual references (e.g., "They were in the mood . . . lovemaking in one room" and "After I enjoyed her sleeping face, I left the remaining money at her bedside, and I went out of the room.").

While Samurai Showdown: Edge of Destiny is rated M in North America, it’s a CERO B game (think of it somewhere between E10+ and T) in Japan. Decapitations automatically make the game a heavily restricted CERO Z title so there’s no way Samurai Spirits: Flash will have the same amount of “ketchup” as the international version.

Now I’m curious why SNK added all the gore for the Western release. Do they really think chopped-off arms and gushing blood will make the game more popular? Of course, this isn’t the first time Samurai Showdown game with gore, but it’s interesting that gushing blood is reserved for the West.