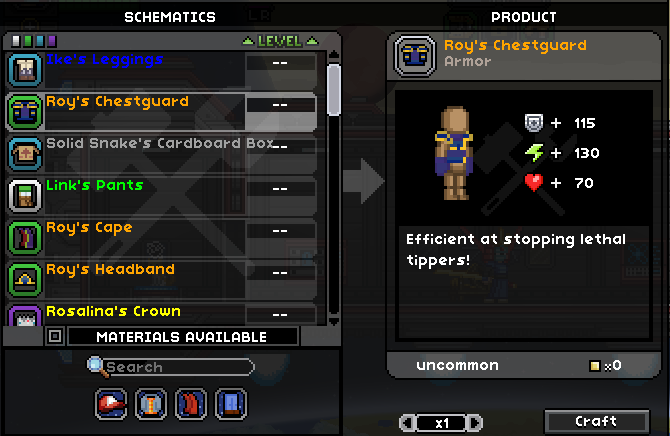 Last time we talked about Starbound, we went over the lengths two people went to in order to put Mega Man into the game. This time, we get to see people dress like iconic Super Smash Bros. characters as they explore the universe. Lends a whole new meaning to “Subspace Emissary,” doesn’t it?

The Super Smash Bros. Starbound mod was made by SomeRandomPerson and consists of a growing library of craftable costumes. Once someone makes a Yarn Spinner station in the game out of wood, they can create attire that makes their characters look like one of nine characters from Nintendo’s series. Updates are planned, but at the moment Ike, Link, Little Mac, Mega Man, Rosalina, Roy, Shulk, Solid Snake, and the Wii Fit Trainer are in the pack. These costumes will also appear in both offline and online adventures.

Installing the Super Smash Bros costumes in Starbound is simple. Open up explorer and go through the Program Files, Steam, SteamApps, Common, Starbound, and giraffe_storage folders to get to the mods folder. Drag and drop everything in the mod’s zip file into there and you’re set.