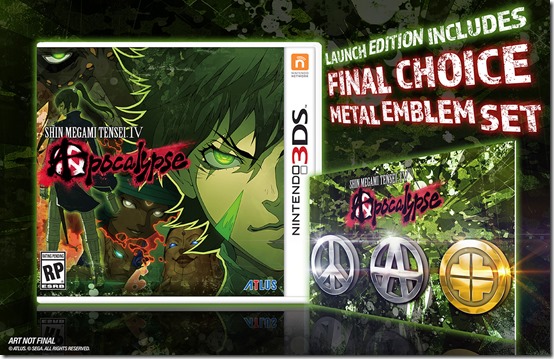 The Shin Megami Tensei IV: Apocalypse Launch Edition gives buyers badges of honor. People who either pre-order or pick up the game immediately after launch will get a special set of metal pins representing insignias you’ll see in the game.

The Shin Megami Tensei IV: Apocalypse’s medallions let people add Dagda’s mark, the peace sign, and the anarchy emblem pins to anything they’d like. As a reminder, Dagda is the demon that makes a binding contract with Nanashi, the game’s hero, after Nanashi falls in battle. Each pin is 0.75" in diameter.

Shin Megami Tensei IV: Apocalypse will come to the Nintendo 3DS in North America in summer 2016.