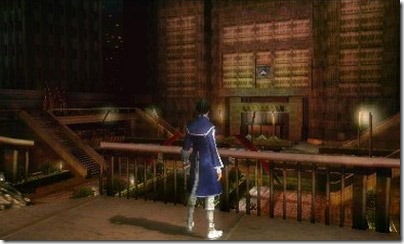 Mikado, of course, is just one kingdom, and Shin Megami Tensei IV would hardly be an adventure if Flynn and the others didn’t venture outside of the tiny castle.  While you’re in Mikado, the game usually has you select where you want to go from a menu—you don’t walk around the streets yourself and see the wonders of your surroundings, which is a bit of a disappointment.

You can talk to the people by selecting them from the screen, and they appear as sprites in front of you. Meanwhile, in dungeons such as Naraku or the forest outside of Mikado Kingdom, you walk around as Flynn, interacting with the world around you through climbing, crawling, and whacking enemies over the head with a spear or sword. 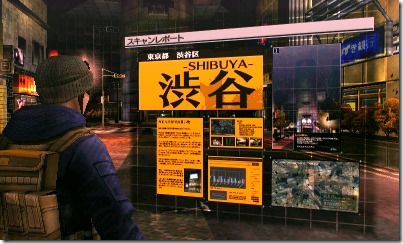 (Note: Screenshot in Japanese, but we’re playing the U.S. version.)

All of this changes once you reach Tokyo, which is where the game really takes off.

In Tokyo, you don’t have a clean menu to select your destinations from. Tokyo is a deserted urban forest of crumbling buildings and puddles of miasma, roaming with Hunters out for themselves and a few ordinary people struggling to survive. Here, in no-man’s land, you move from area to area as an icon on a large map. The icon moves quickly, and you aren’t locked to a grid. Locations are marked, as are relic gathering points and points of interest.

Enemies also appear on the map, and they will chase you if you get too close. Unfortunately, because you’re just a small person-shaped icon, you don’t have a weapon to hit the enemy with, so you’ll have to rely on luck and hope that they don’t ambush you. 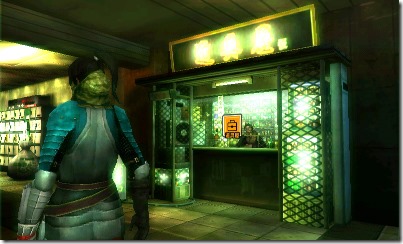 Once you reach an area on the map that you can enter, you then switch to the third-person view that we’ve seen, and run around as Flynn. This is how you’ll be doing the majority of your exploration. These areas that you run around in can’t strictly be classified as “dungeons” either. They’re streets. They’re dilapidated apartment buildings. They’re offices. They’re communities with people trying to rebuild their lives. Effectively, Shin Megami Tensei IV combines the idea of dungeons and regular areas to explore in Tokyo, and this is where the game really shines.

Taking advantage of or overseeing the people of Tokyo (depending on how you look at it), in one region are gangsters, armed to the teeth with firearms. In another, people have decided to live out “survival of the fittest” with religious zeal, with only the strong able to enter their community. Tokyo is still separated into many regions and is referred to as such. It doesn’t seem like there’s a detailed map of Tokyo provided with the game, so you’ll probably have to pay attention to the region names as they appear on the bottom of the screen. These names will be important for quest locations, since certain enemies and items only appear in designated places. 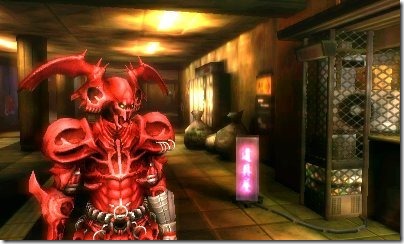 These quests, too, add to the atmosphere of Shin Megami Tensei IV, as people begin asking for items like meat or light bulbs for electricity.  Sometimes, you can cooperate with the Hunters to take out a dangerous demon. Relics become more common, as household items can be picked up and sold at stores since they’re in such dearth.

On the map, because your goal is to simply “explore and search,” there isn’t a designated target location, and this very much enhances the feeling of exploration, albeit in a rather depressing environment. You have a large area to travel around in before you hit roadblocks, and even these are placed rather far away. You could go north into a desert-like area, or you could head south and west into swamps that will poison you and more urban scenery filled with demons. 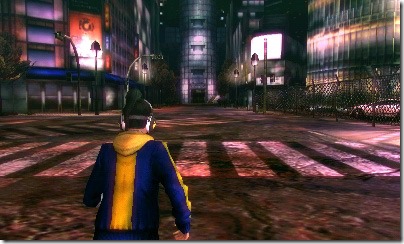 Once you reach these areas and switch to Flynn in third-person, the web of usable paths is fairly extensive, and there are many treasures to loot and places to see. Sometimes, Flynn will even come across a hubbub of people, such as in Ueno or Shinjuku. You’ll travel through just like through any dungeon, so you can fully experience the atmosphere, and again, this is Shin Megami Tensei IV mixing the concept of a dungeon with a regular area. You’ll even find Bars where you can heal or check up on quests, stores to buy items and weapons, and a Terminal, with which you can travel instantly between locations and Mikado.

Back to the map. The map is huge. Furthermore, on the map, rather than physical boundaries, you’re more likely to be hindered by the limitations of your party.  The enemies start becoming stronger and stronger in certain districts, and after a while, it’s just smarter to turn back.  Alternatively, you could even just train in these areas rather than avoid them, if you’re feeling daring. 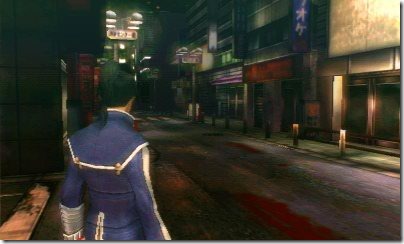 Tokyo has such a different feel, not only in its dark, dreary design, but also with its lack of boundaries. While you are still being watched over by the Priests back in Mikado, such a tenuous link hardly feels real. Tokyo becomes accessible about 1/10th of the way into the game, so luckily, you won’t have long to wait until you can begin exploring it.

Of course, there is an ultimate reason you’re in Tokyo, but that would be giving too much away. What’s important is that you are in Tokyo, and there is no one there with you except your fellow Samurai and your demons. You’ll need to fend for yourself.