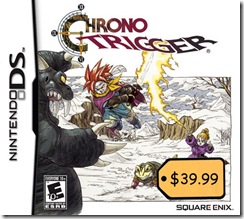 Should video games have fixed pricing? For example, should DS simple/budget games all be $19.99, and all other DS games be $29.99?

Louise: Of course I get annoyed when companies like Square-Enix releases a game that’s $5 more than similar games on the same platform such as their DS games which are consistently $35 at release instead of $30.  It’s a slap to the face of their fans, but hey, no one is making anyone buy anything.  In cases like these, I usually wait for a price drop.

Despite the annoyance, I still believe in capitalism. Video games should NOT have fixed pricing.  Publishers should be free to dictate how much to charge players for a game.  If they’re greedy and price a game out of reach of their audience, it’s them taking the risk.  I’m sure there are people whose job is solely to feel out the market and advice companies on how to price their games.

Jenni: I wish that games did have fixed prices, because it can be quite frustrating to see Nintendo or Square Enix games retailing for $5 to $10 more than other, similar titles. I have to agree with Louise though. The companies have a right to charge whatever they want. Eventually, they’ll see that they aren’t moving enough units (at least, hopefully they will) and there’ll be a price drop.

For example, look at Crisis Core: Final Fantasy VII. It debuted at $39.99. Now you can find it for $19.99 new, and even cheaper used. Personally, I’m waiting for that to happen to Dissidia: Final Fantasy. (You all know it will.)

Laura: Haha, ditto to Jenni about FF Dissidia.  Sole reason I haven’t gotten it yet is because I’m waiting for a price drop on a game I won’t be playing for a while.

Spencer: It seems like most publishers follow an unwritten rules about pricing. HD games generally retail for $59.99, Wii titles $49.99, and DS games $34.99. Unless they’re a mega-hit or the odd low print title, games drop in price pretty fast too. It “pays” to be patient, I suppose.