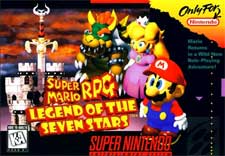 Jenni: This may be the easy answer, but I’m going to say that the Final Fantasy franchise should be preserved. It’s a substantial series with wonderful storylines that many different groups of gamers have embraced and adored. Plus, each entry in the series is unique. Even more important, the series as a whole helps show the evolution of the RPG.

Laura: Since FF has already been taken, I think my answer will be a bit unconventional and stray from my usual RPG fandom. Let’s see, I’ll say the original Super Mario Bros. from the NES. While I’m not the most familiar with platformers, I know the series was one of the most popular back in the day, and many people just enjoyed playing them (my sister included, and I just enjoyed watching her play). I mean, I like RPGs, but they are fairly niche. The Mario series is something almost everyone knows that is original, fun, and just plain goodness.

On another note, being one of the most original early games, it’ll also give people a good base to start working on recreating a new set of games to replace the franchises that got blasted from existence. Then we can have more original games!

Louise: Like Laura, I would pick to save the Super Mario Bros. franchise. If you take the entire franchise, even including spin-offs like Mario RPG, Mario Kart, and Smash, it’s easy to trace how games have developed from the 80s to the present. Mario seems to span most of the popular genres except maybe FPS.

Super Mario Bros. is also a good pick because it doesn’t take itself too seriously. This makes the games just good, clean fun for children, while still being playable and not too ‘kiddy’ for adults.

Spencer: I’m going to go off on a limb and not save any. If every revered video game franchise vanished new ones would emerge and I’m all for new franchises.

It’s interesting that Louise noted Final Fantasy and Mario its many spin-offs. Super Mario Kart would have been great with original characters — say a family of kart racing crustaceans, but a theoretical Krustacean Kart wouldn’t sell as many copies as Mario Kart even if everything else was the same.

Ishaan: I was going to say Final Fantasy, too, since it’s covered such a broad range of genres over the years. Since Jenni has already covered that I’m going to go with Mirror’s Edge.

Mirror’s Edge made us all re-evaluate how the first-person perspective can be used for games outside of regular shooters. It was part shooter, part platformer and part melee combat. I think EA could expand on what the first game did considerably and open up a ton of new sub-genres by evolving the platforming and combat and camera controls. There’s room for introducing stealth mechanics, a platformer / racing hybrid and even a “2.0” design which allows you to create your own levels. Mirror’s Edge can really be anything you want it to while still retaining what makes it special. Plus, there’s plenty of story possibilities and settings that could be explored through different Mirror’s Edge games.