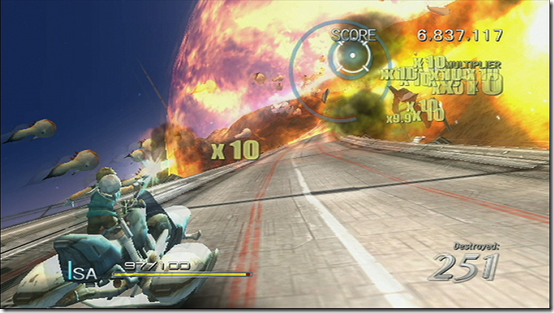 Isa, the son of Airan and Saki from the original Sin & Punishment, and Kachi, a girl with a hoverboard who isn’t quite a girl, are on the lam from Nebulox. This group of five countries originally hired Isa to capture Kachi. Now Nebulox is throwing everything they got to kill both of them while Isa and Kachi speeding through future Japan. Treasure’s list of bullet-dodging fights include giant eels, chimeras on a ruined highway, the “phoenix keeper” (a more family friendly name change from the Japanese version), and a battleship that floats in lava.

All of the action is on-rails, but the level design is so varied and intense Sin & Punishment: Star Successor doesn’t feel repetitive. Treasure used camera angles creatively to turn parts of the game into side-scrolling and vertically scrolling shooters with optional motion controlled targeting. A few boss battles feel like brawlers since Isa and a commander from Nebulox are locked in an arena. Think Senko no Ronde done Treasure style. In another level, the remote acts as a cursor and a flashlight. These little touches mixed with new patterns keep players on their toes and make each stage in Sin & Punishment: Star Successor feel fresh. 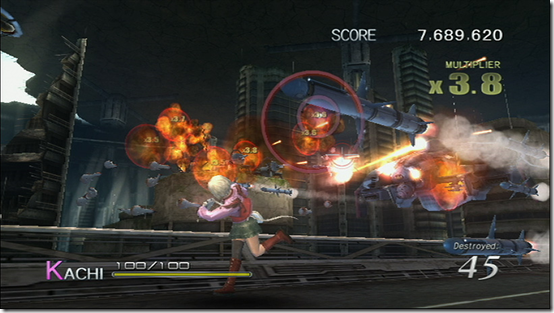 Sin & Punishment: Star Successor gives you all of the weapons and moves you’ll use from beginning to end in stage zero, the tutorial level. Instead of leveling up your character, you, in a way, level up as you keep playing. I had to use continues and checkpoints to make it to the end the first time. I also liberally used the Z button dodge roll, which grants temporary invincibility as you fly through projectiles. Each run I got a little better. Instead of rolling, I would gently glide to a safe spot. I memorized bullet patterns, got hit less, used fewer continues, and found more medals. Sending missiles back at enemies by hitting them with your sword is one way to get those score racking items.

Treasure designed a brilliant score system that pressures players to get better. Each time you shoot a keeper or a background object your score multiplier goes up. Get hit and the multiplier goes down, even below 1x if Isa gets shot too many times. While you can scrape and survive a boss battle with a tiny bit of life left, you’ll only get a paltry amount of points because of the damaged score multiplier (or should I say divider?). 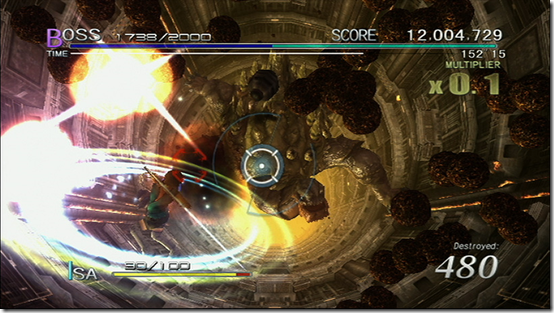 Nintendo did a fantastic job localizing Sin & Punishment: Star Successor for the West. Sure, this isn’t a story based game, but fans will appreciate the language options. You can play Sin & Punishment: Star Successor with English or Japanese voice acting. Subtitles are in four languages too: English, French, Spanish, and Japanese. So, you could play the North American version entirely in Japanese, if you want to.