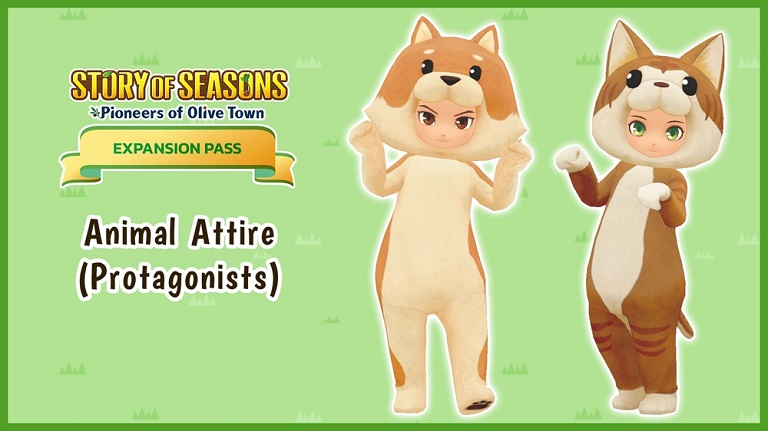 Part 1 of DLC for the English version of Story of Seasons: Pioneers of Olive Town will allow players to moonlight as a detective and show off their wild side in animal kigurumi. Expansion Pass Part 1 will go live on April 29, 2021 for English players.

The Animal Attire costume dresses up the protagonist and the marriage candidates in a variety of cat and dog costumes. There are multiple colors and breeds, which reflect the personality of each marriage candidate. Blaire, for example, wears a bright pink cat costume, which suits her feminine personality.

The DLC scenario “Olive Town Mystery Files” is the first time that Story of Seasons has tackled a mystery plot. It follows the protagonist, Mikey, and Cindy in numerous small sub-scenarios as they attempt to solve the various mysteries around Olive Town. Some cases that these modern-day Sherlocks shed light on include whisperings about ghosts and rumors about mermaids.

Though details of the expansion pass were announced prior to the game’s launch, only recently did XSEED and Marvelous post information on Part 1’s release date. Earlier this week, details about the second wave of DLC for the Japanese version of Story of Seasons: Pioneers of Olive Town went live. Windswept Falls will introduce four new characters—which includes two marriage candidates—and school uniforms. It will come out on April 28, 2021 in Japan, and May 2021 in other territories.

Part 1 of the Story of Seasons: Pioneers of Olive Town DLC will release on April 29, 2021 in North America and Europe. Though Part 2 will come out in May, there is no concrete date yet. The game and expansion pass are currently available on the Nintendo Switch.