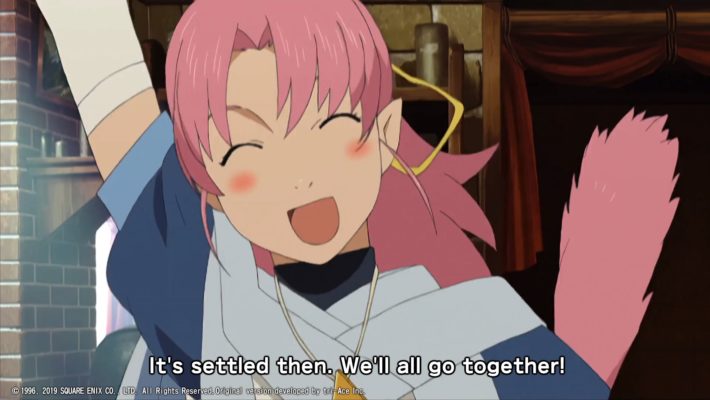 Lots of people are going to get a new opportunity to head into an ocean of stars. Square Enix has decided to take people back to Star Ocean’s roots with Star Ocean: First Departure R PS4 and Switch versions. Each one is a slightly updated version of the PlayStation Portable remake, complete with visual adjustments and minor tweaking. While this is essentially like taking a classic car in to be detailed, it is certainly enough to breathe new life into the game (and hopefully series).

Star Ocean: First Departure R begins like many fantasy RPGs would. A group of plucky young adults are being given way more responsibility than you would expect and are tasked with looking out for their village. When a neighboring town falls victim to a plague, the trio heads out looking for an herb. Said plant turns out to be a McGuffin to turn everything on its head. While looking for it, the trio comes across a starship captain, Ronyx Kenny, and his second-in-command, Ilia Silvestri. They learn that their planet is considered underdeveloped, the disease is caused by a biological weapon, and the only way to possibly save their entire civilization is to get involved with both space and time travel. This leads into traveling around their planet, Roak, in the past, engaging in Private Actions in towns to build up relationships with others and see different scenes, learn skills to build up abilities, and hopefully find a cure. 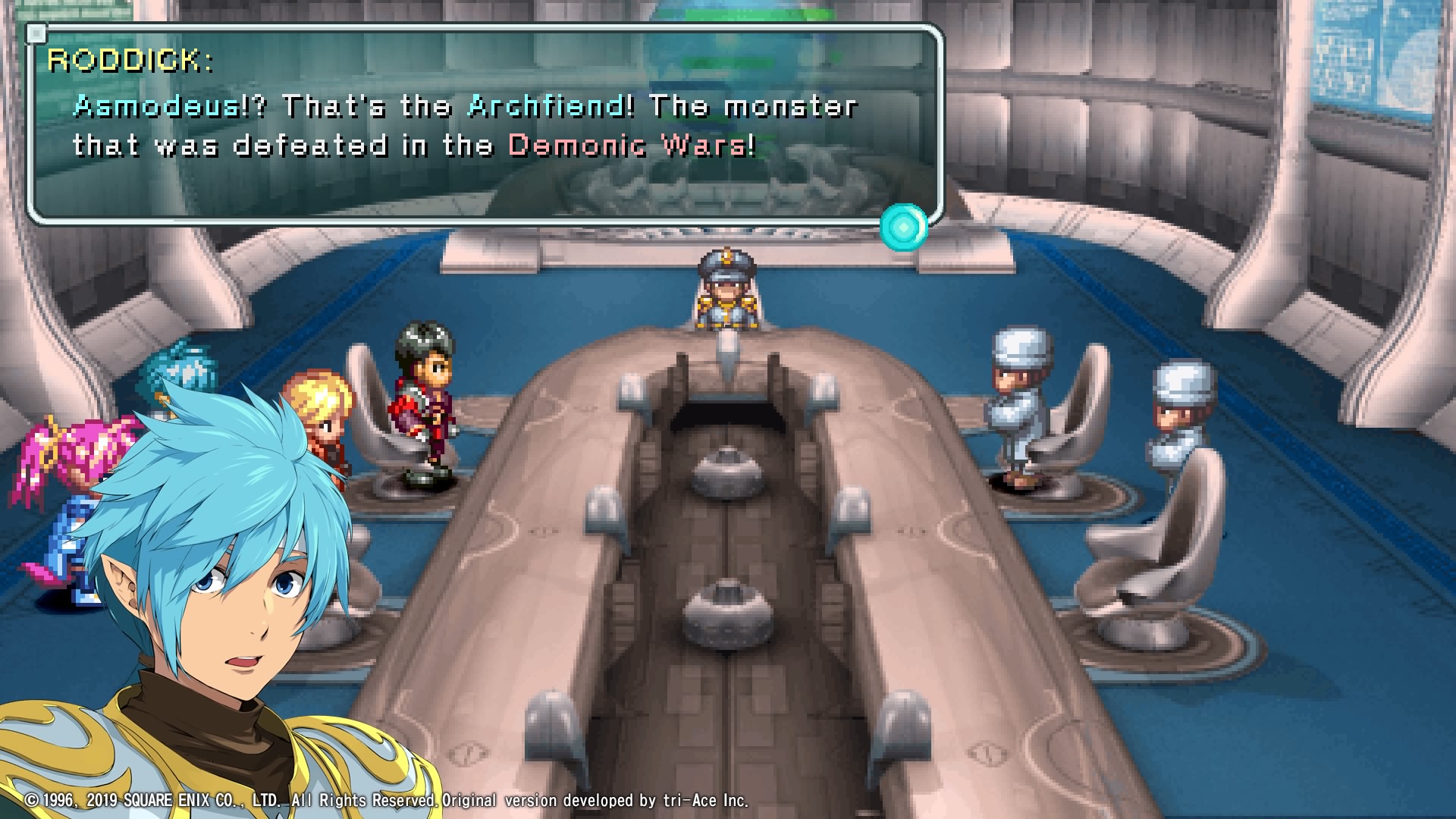 The transition from the PlayStation Portable to the PlayStation 4 isn’t without its costs. Namely, there’s the fact that the original backgrounds and environments don’t look all that great when they made the jump from the handheld to the console. This is especially evident anytime you are in a scene where you have the rendered backgrounds, character sprites, original font, and new Katsumi Enami portraits all in the same place. The discord is palpable.

Which is a shame, because some elements don’t look too bad when converted from standard definition to high definition. Let’s say you’re in a battle. Star Ocean: First Departure R looks fine then, because the focus is on the all of the character and enemy sprites. They’re detailed and you can see things like accents on armor or feathers on Joshua’s wings. When you are forced to focus on too much, you get a better idea of what isn’t holding up.

While such a dichotomy between styles can be a bit jarring, the other adjustments present in Star Ocean: First Departure R show a level of care and commitment to this rerelease. The new voice acting options are especially welcome. Yes, when it comes to the English voice acting, it is from an era where the casting decisions might not meet today’s standards. (I’m a softy for that sort of nostalgia, so I was fine with it.) But having so many options, including the original Japanese, is a chance to essentially see it how it was meant to be played. 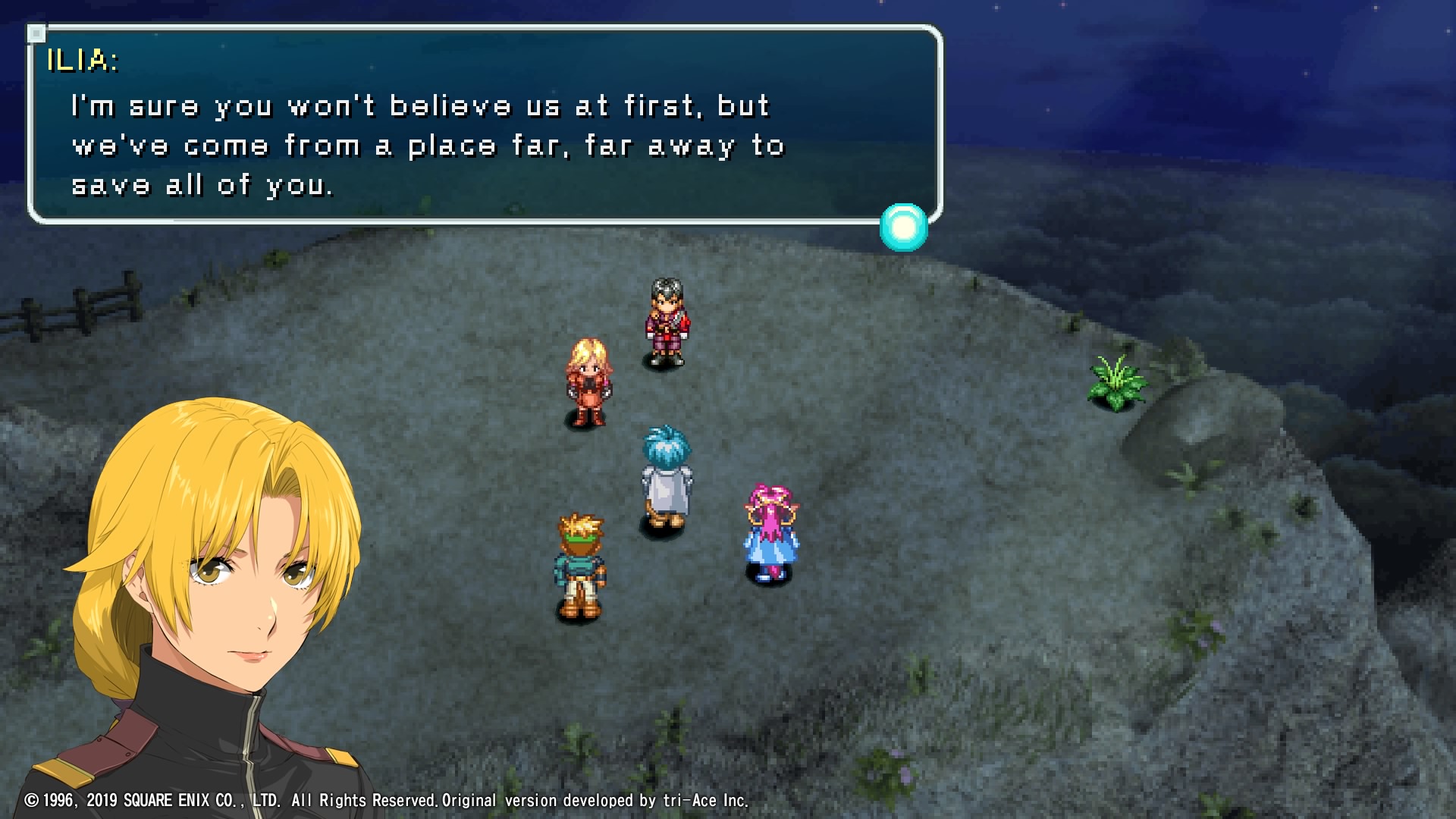 But really, a lot of this comes down to convenience. Star Ocean: First Departure PS4 and Switch copies are a big deal for a game that was once a Japan-exclusive Super Famicom game, then only appeared worldwide on the PlayStation Portable. Being able to speed things up a little, to get around a little easier in a game where we didn’t originally have the sort of pace we’re accustomed to now, is a big help. This is a chance to see where Star Ocean came from and how its pacing and tone were set and this time, it might feel like you’re traveling through it at a more reasonable pace.

Star Ocean: First Departure R wasn’t the first JRPG to bring in science fiction elements, but it was one of the forerunners. For years, it didn’t always get the audience it needed. Partially because of its Super Famicom timing and also due to the localization’s PlayStation Portable exclusivity. This release means everyone can see it. Sure, it might look a bit dated, but the battle system, private actions, and general story are still sound and worth experiencing.

Star Ocean: First Departure R will be available on the Nintendo Switch and PlayStation 4 on December 5, 2019.