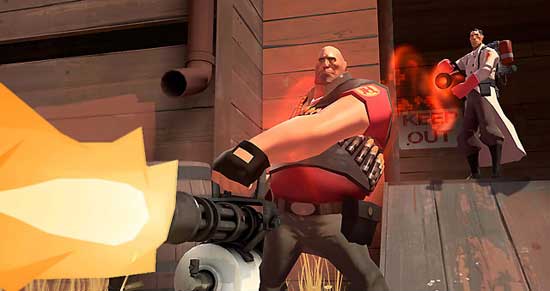 Team Fortress 2 might just be the best multiplayer game to come out all year. After many hours of playing, I've noticed that some people need a bit of guidance.  While I'd love nothing better than to spend all my playing time typing out helpful hints in teamchat I doubt my teammates would appreciate the text spam.

As a compromise, I bring to you, Siliconera readers, tips to make you more helpful to your team:

A medic is the perfect class to be when you're new to a map.  Simply follow around a teammate and heal them while getting familiar with the map and scoping out the other team.

One of my pet peeves is seeing an engineer start building a sentry and then another engineer build one right next to it.  I don't see the logic in that.  Level 1 sentries can be easily taken down by a few shotgun shots and building them next to each other just makes them easy for spies to sap one after the next.  What would make more sense is if the second engineer helped the first one upgrade his sentry. One fully upgraded sentry will do more damage than three measly level 1 sentries.

3.) Dispensers are your friends in Sudden Death

The first thing I usually see engineers build is the sentry gun. That works in normal game modes, but in sudden death, it's more prudent to build a dispenser.  A dispenser not only heals your teammates since they can't get health in the respawn, but also provides much needed metal in metal-scarce maps.  I've seen many teams win by having the whole team close to a couple of dispensers while picking enemies off.

As alluded to from a past Penny Arcade comic, when you see that scary heavy weapons guy coming at you with a puny medic hiding behind him, don't waste your bullets on the heavy weapons guy. Kill the medic first.

The more you shoot at the heavy, the faster the medic will ubercharge and sooner than you know it, they'll be plowing through your supple body faster than a hot knife through butter.

5.) Be Aware of Team Objectives

If you're on a control point map and you see that a point close to you is getting taken, don't go chase down your revenge victim. Get to the control point and block their capture.  By simply standing on the point, you can prevent them from capping. It's easier to prevent a team from capturing than it is to try and win the point back.

If you're playing an engineer in a map like Dustbowl, make use of teleporters.  Getting from spawn to the point of action may be easy for you, a faster class, but it takes slower classes like heavies and soldiers an excruciatingly long time.  They'll be thankful for a quick teleporter.  If you're a slow class, it should be a no-brainer to use the teleporters.

I debated writing this up since some may see it as an exploit, but I think that it promotes communication and teamplay.  If you're on an offense team waiting for defense to set up and you have a medic, switch to a soldier and blast the hell out of yourself with your rocket up against a wall.  It's even faster if you're close to a health cabinet.

Being hurt charges the ubercharge faster and as long as you stay in the spawn, you can switch classes instantly.  After the medic is charged, feel free to switch to your class of choice.