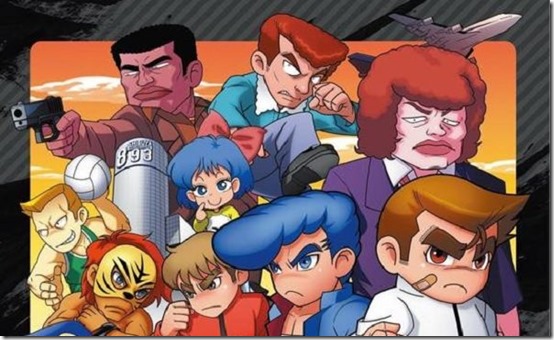 Siliconera spoke with River City: Tokyo Rumble publisher Natsume’s producer, Taka Maekawa, about the process of bringing the series to the West, and how it sticks to its roots as it evolves and gets localized.

How did Natsume partner with Arc System Works to bring the River City / Kunio-kun games to the West?

Taka Maekawa, Producer at Natsume: Our Partnership with Arc System Works started almost a year and a half ago through a good friend of mine in Japan. It all started with Gotcha Racing and Brave Tank Hero for the Nintendo 3DS, then continued with Super Strike Beach Volleyball and River City: Tokyo Rumble this year. With River City, I contacted Arc System Works as soon as I saw the news that Million’s title rights (who were the right holders of Tecnos Japan titles) had been transferred to Arc System Works.

Well, not only Tokyo Rumble, but the Kunio series as a whole has always evolved from time to time. And yet, at the same time, it still keeps that Kunio feeling, especially with the classic art style, which is one of the things I believe makes Kunio series popular.

The Kunio-kun series has been localized in different ways like changing the main characters to Alex and Ryan in River City Ransom. It looks like the original names, Kunio and Riki, are being used. Can you tell us how is River City: Tokyo Rumble being localized?

With the character names, we kept it same as the original Japanese version since the game takes place in Tokyo. With other text in the game (such as the way NPCs talk, item names, etc.) we combined the nomenclature from the past games in the series, along with our own personal touch.

The game also has a dodgeball mini game that’s like Super Dodgeball. Can you tell us more about this?

At a certain point in the game, Kunio gets recruited by the school dodgeball team, and you’ll play a dodgeball mini-game. In addition, dodgeball isn’t the only sport Kunio will be able to try his hand at in the game! I’m sure these mini-games will give lots of nostalgic feelings to players who are familiar with the past River City titles.

There are more hot blooded River City games in Japan, like the medieval spinoff for 3DS and River City Ransom SP. Is Natsume looking at bringing those over?

Of course! We are definitely open for any opportunities with other titles in the Kunio series!