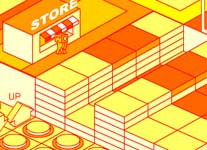 Crimson Room isn’t the only flash game Success snapped the rights up to. They picked up Colpile, a brain teasing puzzle game where you raise blocks from the ground to make colored patterns. The trick is you can only raise a row or column of blocks, which means you have to shuffle between the two to create the appropriate pattern. As a budget priced SuperLite game it’s an interesting addition to the DS lineup. While you’re waiting for Chotto Aima no Colpile to arrive in Japan this April get a feel for it by playing the flash version.