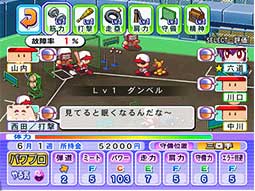 After years of releasing Power Pro baseball games in Japan, Konami is teaming up with Take Two to bring a localized version of the Power Pro series to North America. Unlike the realistic Major League Baseball sims in North America, the Jikkyou Powerful Pro Yakyu series has a more arcade-y feel. Simpler controls and the bobblehead-like players are trademarks of the Power Pro baseball series.

Since Take Two holds the MLB license they are making changes in MLB Power Pros to better suit it for a North American audience. Changes like replacing the unknown players with MLB stars in the style of the Power Pro series and recreating MLB stadiums. While the faces may be different from the original game Take Two is keeping success mode, a journey to the World Series with RPG elements, in MLB Power Pros.

Look for it on the Playstation 2 and the Wii, if you want waggle control with your baseball, this fall.