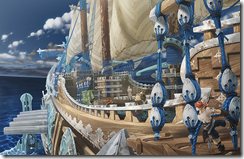 Not airships. Regular sea sailing ships are shown in the latest batch of The Last Story concept art.

The producer explains, “The world within an island is extended with ships.” Ruli Island, an island with European architecture, is the game’s setting. Canals running through the island lead to the sea and teaches people to use ships to adventure further.

“When it comes to computer graphics, the feeling of ‘water’ is remarkably lovely,” says the director. You’ll see water in the castle, center of the city, caves (falling from waterfalls), and when the characters travel in the open sea.

While the blog doesn’t outright say this, it appears the mercenaries in The Last Story will travel the world in a ship just like classic Sakaguchi developed Final Fantasy games. “Vehicles for a fantasy world are an essential tool to get your heart racing with excitement,” said the producer. 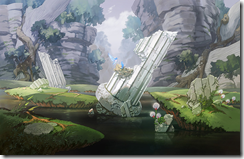 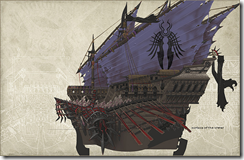