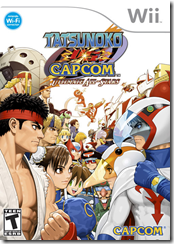 OK, there are more than 25 characters on the US cover for Tatsunoko vs. Capcom: Ultimate All-Stars, but Doronjo’s lackeys Boyacky and Tonzra aren’t playable. When Capcom confirmed Zero and Joe the Condor they said those were the last two characters added to the game.

Contrary to Capcom’s announcement, the ESRB description says Tatsunoko vs. Capcom: Ultimate All-Stars has 26 selectable fighters. “This is an acrade-style (sic) fighting game in which players can select from among 26 characters based on Tatsunoko anime and Capcom video games (e.g., Street Fighter, Viewtiful Joe, Mega Man).”

An earlier leak from Capcom’s Tatsunoko vs. Capcom page also had a 26 character roster with Yatterman No.2 rumored as the final fighter. Yatterman No.2 isn’t on the cover art. Was she abruptly cut or is Capcom saving her (or another character) for a last minute reveal?

With Hakushon Daimao out of the game, a 25 character roster would tilt Tatsunoko vs. Capcom ever so slightly in favor of Capcom characters. 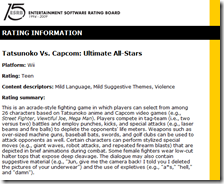