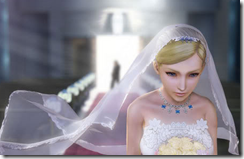 Square Enix confirmed The 3rd Birthday, a new game in the Parasite Eve series, is heading West. The title, as a PSP game, will make an appearance at next week’s E3 event.

The 3rd Birthday is an action RPG and Aya Brea, the heroine from the past two titles, returns.

Hideous creatures descend on Manhattan. Ground reports from the squad tasked with containing the pandemonium refer to these life forms as “the Twisted.” An investigatory team known as the CTI is formed within the year.

The Overdive system emerges as a means of opposition, but only one viable candidate exists –Aya Brea. A gift as she awakens from a lost past on this, the occasion of her third birth.

A ship date was not announced for North America, but Square Enix CEO Yoichi Wada said the game was on track for 2010 in Japan.

Update: Finally, a screenshot with Aya not in a wedding dress. I believe this is a still from the TGS 2008 trailer.