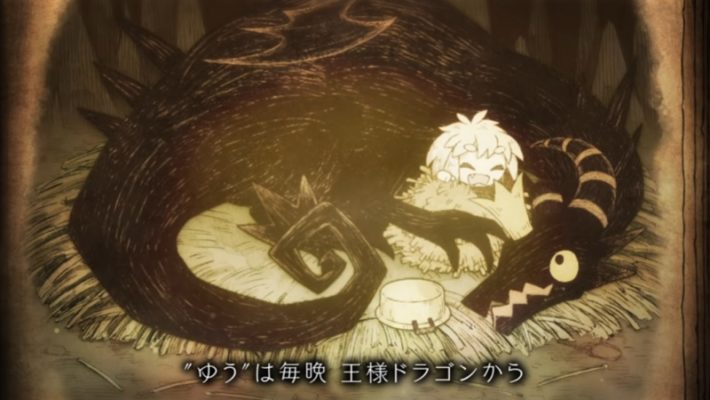 The tease is over: Nippon Ichi is off on a new Hero’s Journey with its next game, a “Storybook RPG” titled The Evil King and the Good Hero (わるい王様とりっぱな勇者). The game comes from Sayaka Oda, the creator of The Liar Princess and the Blind Prince. The company also opened an official site for the game, and uploaded a teaser trailer setting the mood:

The Evil King and the Good Hero seem to have a hand-drawn, storybook aesthetic like its character design and visuals. The trailer tells the story of a little girl named Yuu, who lives alone in the woods with King Dragon. King Dragon raised Yuu, and regaled her with tales of the Good Hero who defeated the Evil King. Yuu grew to admire the Hero, and set out to become one herself. Unbeknownst to Yuu, King Dragon was himself the Evil King of the tales, and the Good Hero was Yuu’s father. The trailer ends with the tragic-sounding tagline “This is the story of how you will defeat me someday”.

The official site contains more information on The Evil King and the Good Hero. The whole game will maintain its storybook appearance, and most of its visuals will be based on hand-drawn illustrations. Yuu will train to be a Hero, defeating monsters and exploring the world, but her doting dragon foster parent keeps a careful eye. King Dragon will often reach out to remove obstacles in secret, helping Yuu without breaking her confidence. At the end of the day Yuu and King Dragon will bed down in their cave, and Yuu will regale her guardian with stories of her adventures and accomplishments.

The site also adds a bit more texture to the premise laid out in the trailer. In The Evil King and the Good Hero, the Evil King Dragon was actually spared by the Good Hero, Yuu’s father. He cut off King Dragon’s horn and let him live, and over time the two bonded and became friends. King Dragon became peaceful, until one day, when the hero appeared before him, bearing a baby and a mortal wound. The hero entrusted his infant daughter to King Dragon, who resolved to raise young Yuu to become a Good Hero like her late father, even if it means she’d have to defeat him one day.

The Evil King and the Good Hero will release on the Nintendo Switch and PS4 in Japan on June 24, 2021. An international release has not yet been announced. Creator Sayaka Oda’s previous game, The Liar Princess and the Blind Prince, is immediately available on Switch, PS4, PS Vita, and Android.