Introducing the gameplay demo for The Evil Within, the upcoming inaugural effort from Shinji Mikami’s Tango Gameworks studio, Mikami proclaimed: “With The Evil Within, we are creating a truly horrifying game, and taking survival horror back to its original roots.”

After the set-up, Mikami explained why The Evil Within is considered in his mind a pure survival horror game. Games that fit this description deal with unimaginable fear and the feeling of triumph that comes with overcoming it, as well as the struggle to survive with the most meager of resources. 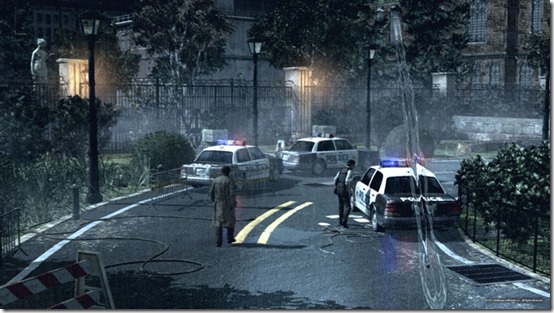 The game’s protagonist is Sebastian, who works as a detective. Sebastian is en route to an asylum, alongside two partners. Once at the scene we see the street is littered with abandoned police cars. Sebastian and his male counterpart decide to go in, commanding the female officer to keep an eye outside.

Next thing you know, Sebastian blacks out. In the darkness, we hear noises—an unpleasant, squishy noise. A blurry vision materializes and we see the scene from behind the eyes of Sebastian himself. But the viewing angle is upside down? We soon realize that Sebastian has been hung upside down, much like several other bodies, all of whom appear to be dead. We then see a huge, lumbering mass walking into and out of frame, and then sounds… of flesh being torn apart. 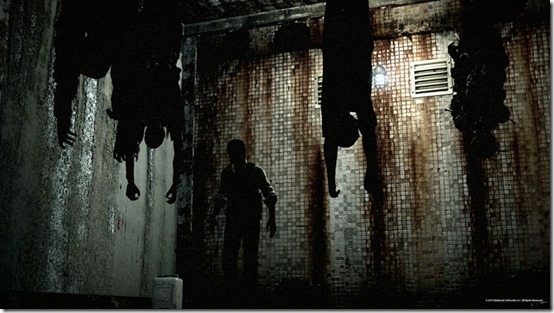 The gruesome butcher cuts out a chunk of some poor soul, and is slicing whoever it was into finer chunks. We also notice a knife sticking out of one of the other bodies, and thus we reach our first bit of gameplay. Sebastian has to swing himself and nab the blade, before he is served on the carving table.

Once the knife has been acquired, Sebastian manages to cut the rope at his heels off and free himself… which at this point, reverts back to a third person view, by the way… all without the butcher noticing. Upon sneaking up to an exit, Sebastian discovers that it is locked. Further investigation reveals that the keys are directly above the butcher table. Splendid. 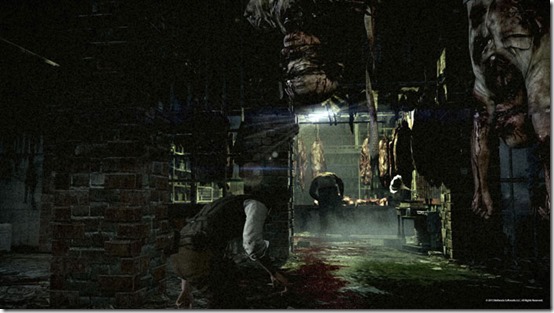 Thankfully the butcher walks away for a brief second, prompting Sebastian to quietly sneak up, snag the keys, and then make his way back to the exit. There is no running, just calm, collected footsteps. The name of the game, or at least one of them, is tension. Even the unlocking of the door is extremely slow and concerted, to heighten the mood in The Evil Within. It’s almost like one of those horror movies where you’re screaming in your skull for the onscreen character to hurry the hell up. But if that’s what they were to do, that would be no fun! 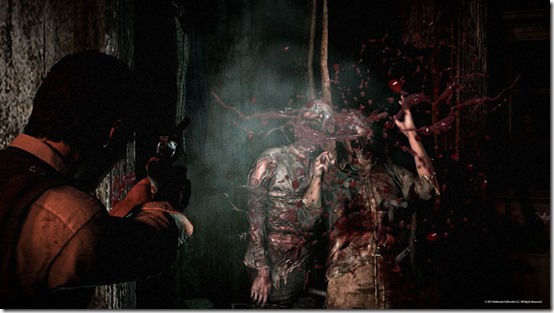 Once the key has been acquired, Sebastian sees a stairwell that he goes up through a dark corridor—so dark that he doesn’t notice the alarm he tripped, which cues a large maniac with a chainsaw. As Sebastian attempts to flee, he finds himself in a room full of blades, and all of sudden, he has no idea where he is. But the chase is still on, and the chainsaw maniac swings his weapon, making contact with Sebastian’s leg. Which isn’t cut clean off, thankfully, but Sebastian has to now limp forward, frantically, to avoid being slaughtered. Luckily, he ends up in an elevator that whisks him off to safety for a little while.

From there we see Sebastian limping around further, trying to avoid the chainsaw guy in a game of cat and mouse. It’s this part of the demo in which the visuals truly shine, with high detailed rubble and extremely convincing lighting effects. Simply watching Sebastian limp around, just out of sight of the chainsaw guy was pretty tense, so actually controlling him has to be even more nerve racking.

At this point, Sebastian is completely defenseless and all he can do is hide in lockers or throw bottles to distract the chainsaw-wielding man. After this segment, which was also designed to show off all the stealth gameplay, Sebastian is able to successfully make an escape from that environment. 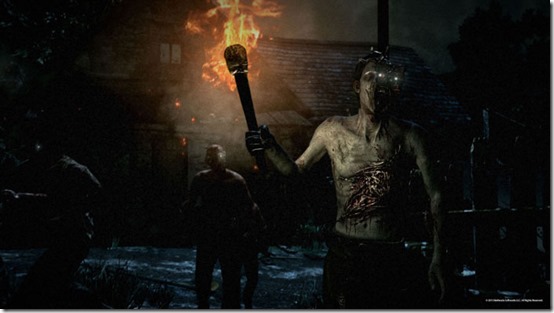 From there, Sebastian ends up in an environment that is similar to where he first arrived on the scene. He’s also no longer limping for whatever reason, which was a bit odd. Talk about a speedy recovery! We also see that the outside is no more; it appears that a large explosion has complete decimated the city. The demo then jumps forward, quite a ways into the game. We see Sebastian approaching a safe house, but one that is infested. Up till this point, Sebastian is just a guy trying to figure out what hell is going on and getting by with next to nothing, as Mikami promised.

But here, it felt a bit more a guns-a-blazin’, like the more recent Resident Evil games. Sebastian has to deal with a party of infected or zombified people (not sure which) who have large pieces of metal stuck in their heads. In addition to guns, Sebastian has access to a mine trap, which he activates once enough enemies are in the proper position. This part feels especially Resident Evil 4-like.

Then, all of a sudden, Sebastian finds himself in another environment. And then another. For reasons that one will have to play the actual game to understand, his mind is either playing tricks on him, or reality is being distorted. More than likely both. The E3 demo culminates with Sebastian being hit by a massive wave of blood, a la The Shining, and a slender woman with long black hair that pounces upon him, similar to many J-horror flicks.

Mikami claims that The Evil Within is a return to the very roots of survival horror, though he appears to have borrowed several tricks from various games that he helped to inspire, including ones that he had nothing to do with, as well as liberally sample the spectrum of horror film tropes out there. It’ll be interesting to see if these gel together appropriately and The Evil Within forms its own identity, or if this will be an awkward mishmash of lots of stuff. Though, given the creator’s pedigree, there’s nothing to fear… at least not yet.