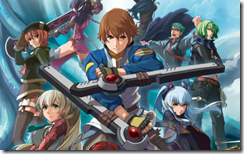 Falcom will bring The Legend of Heroes: Trails of Blue, the fifth game in the Trails series, back to stores in December according to retailer HMV.

What’s interesting is the name of the re-release – The Legend of Heroes: Trails of Blue New Chapter Commemoration Budget Price Version. If this discounted version is celebrating a new chapter in the Trails series we should hear news about Lloyd’s next game soon.

When Siliconera spoke to the president of Falcom he said most of the company’s staff is working on the next game in the Trails series.