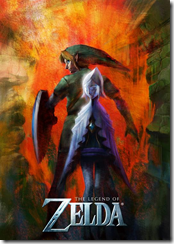 Link, the Link from The Legend of Zelda: Skyward Sword, lives in a sky city called Skyloft. While this may sound whimsical to us, this is everyday life to Link. Born in Skyloft, Link has never seen what’s below until an incident beckons him to the ground. The world beneath the clouds is a dangerous place, populated with typical Zelda monsters like Octoroks and sword bearing skeletons. Link will split his time between his home in the clouds and ground.

Remember the concept art Nintendo released at E3 last year? That girl is the Master Sword. Give yourself a pat on the back if you guessed that! She changes into the Master Sword at some point in the game. Miyamoto quickly made a joke and asked Eiji Aonuma, Director, if players would need to collect three Master Swords to make the transformation.

The Legend of Zelda: Skyward Sword features a grown up link, but a different visual style compared to Twilight Princess. This look was chosen based on the gameplay. “You have to pay attention to the enemies, how they defend, what their weakness are, if they are blocking with their sword. In the case of the scorpion, the pincers open at different angles. You have to be able to identify what to those angles are, what those weakness are. This is best illustrated to the player by using over exaggerated enemies,” Aonuma mused.

“If we used the graphics from Twilight Princess we would have been already been done,” Miyamoto joked. Miyamoto approved the new art style for The Legend of Zelda: Skyward Sword in a single step.

Another major change is an outline of a remote on the right hand side of the screen. Nintendo enabled that feature for the E3 demo, but players will be able to toggle the heads up display on or off in the final game.

The Skyward Sword team are still developing the game. Look for it on Wii next year.