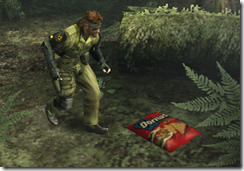 Altair from Ubisoft’s Assassin’s Creed taught Snake his roof jumping move and lent him a straw box to hide in.

Uniqlo and Konami are teaming up to give Snake some style. Metal Gear Solid themed t-shirts from the Japanese clothing company also appear as in game items. While Snake had an iPod in Metal Gear Solid 4, Snake sticks to Sony branded music players in Peace Walker. All kinds of Walkmans are in the game ranging from portable cassette players to modern (but futuristic for Naked Snake) MP3 players.

Suntory is putting cans of Mountain Dew and Pepsi Nex into the game. Drink these to recover health. Snake can also find bags of Doritos and Axe body spray lying around. Snake can also wear t-shirts with these products, just in case you want to advertise them when you play online.

Metal Gear Solid: Peace Walker also has promotions with magazines such as Famitsu, Dengeki, and Jump. Details about these weren’t disclosed. The last major Famitsu video game collaboration was the Famitsu shield in Phantasy Star Portable 2.

For real life products, Konami teamed up with Porter and Square Enix to make PSP pouches and figures, respectively.