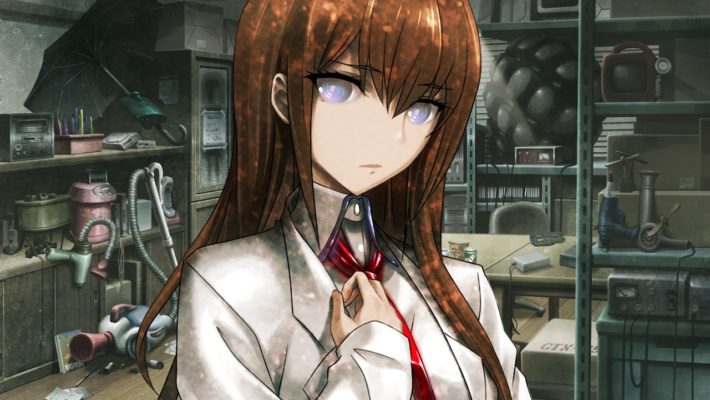 Rintaro Okabe and Kurisu Makise have chemistry. The two Steins;Gate leads play so well off of each other throughout the series. He picks up on the things she tries to hide, like being an @channeler, and doesn’t treat her differently for being a genius. Kurisu calls him on his Hououin Kyouma persona and goofs on him, but does acknowledge his own intelligence. When it comes to the Steins;Gate: My Darling’s Embrace Kurisu route, it totally plays up all of the best elements of their relationship.

Editor’s Note: There are some minor spoilers for the Steins;Gate: My Darling’s Embrace Kurisu route. 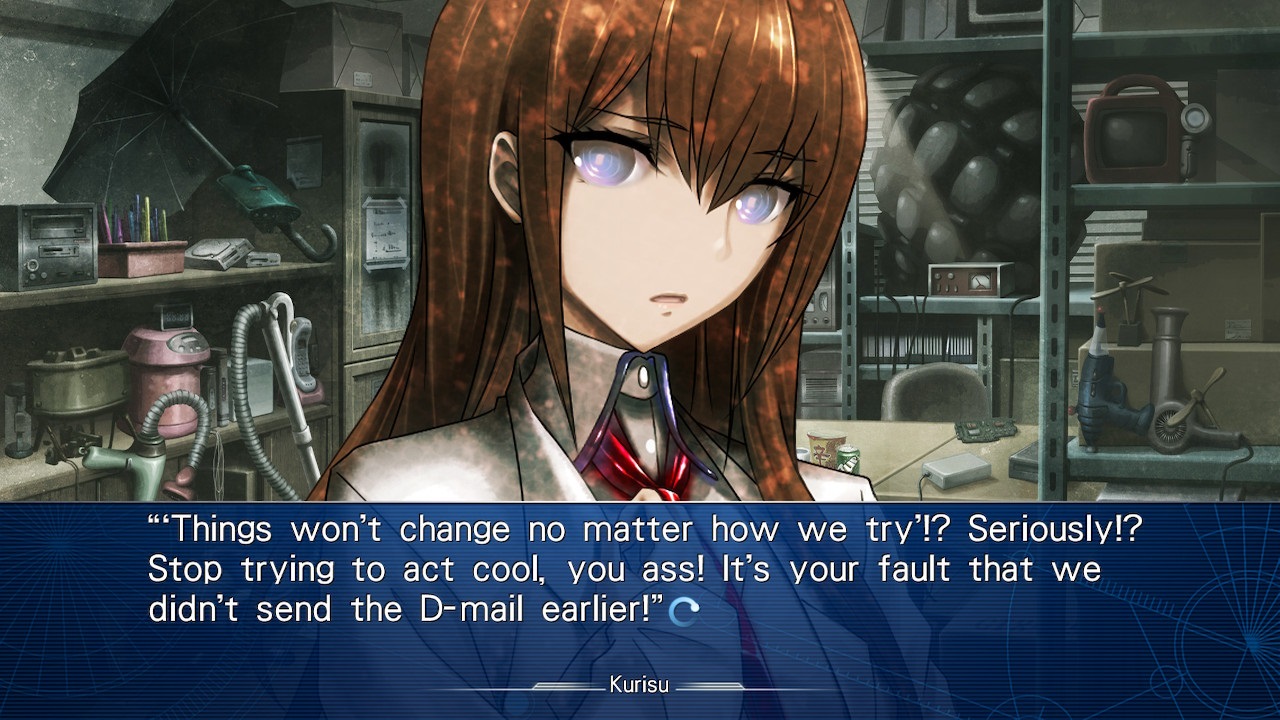 As mention before, Steins;Gate: My Darling’s Embrace is a visual novel without the drama, heartbreak, or potential disaster found in the original or its sequel. We get an ideal situation and the ability to explore alternate world lines. Except for one route, which focuses on amplifying everything that makes the Rintaro and Kurisu relationship so delightful to watch. After the two end up wearing Experimental Gadget 12: Darling is an Idiot, they have to spend time together. Arguing or being separated will cause both to receive an electrical shock. The two will only be freed if they somehow wind up in sync with one another or the battery runs out.

Except, Rintaro and Kurisu have the bright idea that sending a D-Mail into the past could stop Darling is an Idiot from ever being developed. The two race to send the message that will save the day. Unfortunately, constant stalling on the part of the player has them missing the window to send the note. What follows is a route where the two, at their most tense, are trapped together and repeatedly shocked because they just can’t get along. 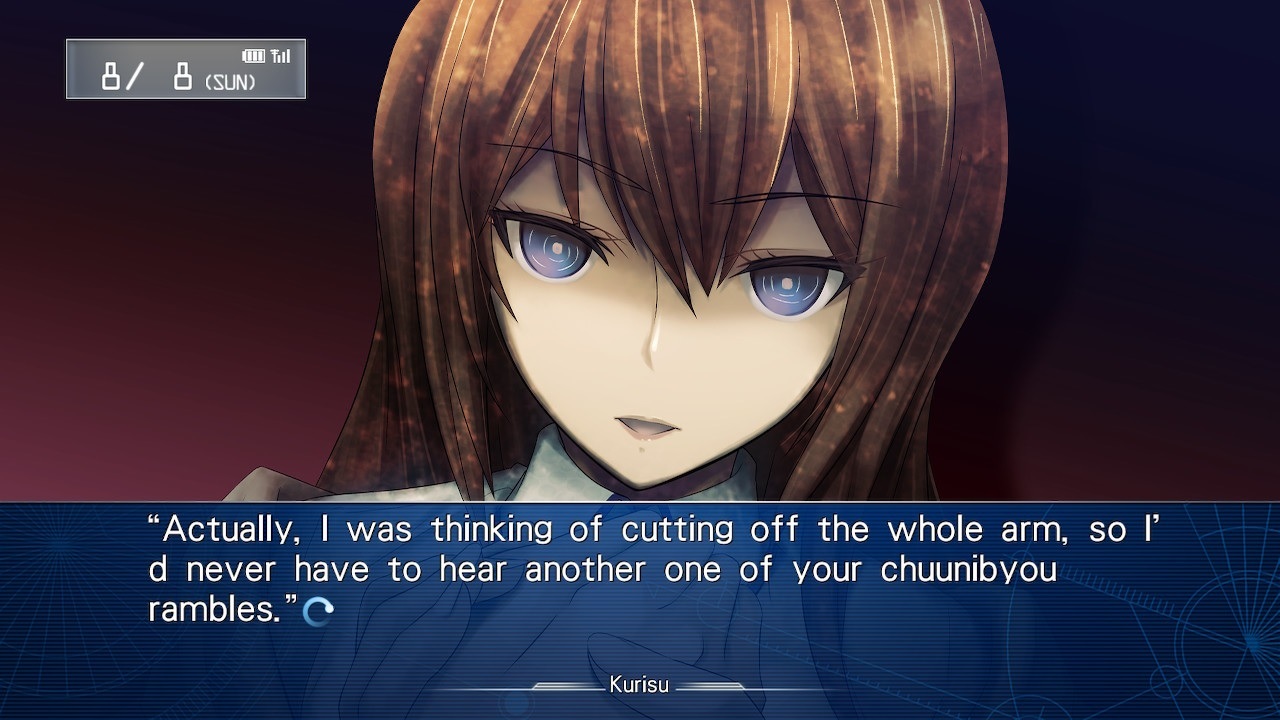 It is absolutely fantastic.

While Kurisu and Rintaro can and do get along in other Steins;Gate games, they are forced into the worst sort of situation here and react accordingly. The only way to prevent painful shocks is to hold each others’ hands and stay together. Since this is in a world line and time period where the relationship between the two isn’t as developed as it could be and they have sleeplessness and stress working against them, there’s this constant stream of banter.

For example, one of the best moments comes when the two are sleep deprived and the PhoneWave refuses to work. The result is a moment where it seems like Kurisu might have, as Itaru puts it, “gone full yandere.” At first, Rintaro thinks she’d only cut off his hand to be free of Darling is an Idiot. (He even says, “Attempting to remove my hand would only cause it to become more powerful than you could imagine!”) But then no, she insists the whole arm would be better to end every Hououin Kyouma rant, complete with speculation about the best way to execute the procedure. 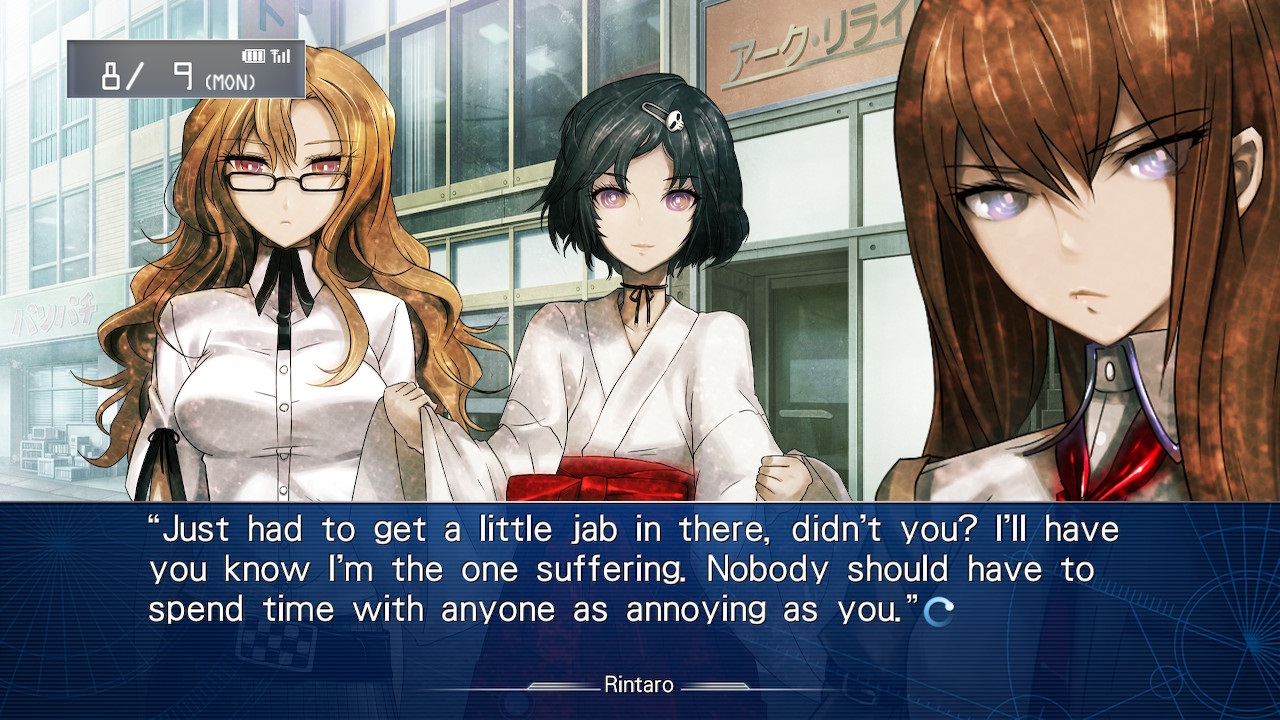 While I’ve brought up the constant threat of electrical shocks, which never stop being funny, and the debut of Yandere Kurisu, this Steins;Gate: My Darling’s Embrace route isn’t just funny. The charming moments, where the two genuinely show how much they mean to each other, are there too. When the two have to share a bedroom, because of the nature of Darling is an Idiot, he is perfectly respectful. When she asks him to cover his eyes and ears while she goes through her nightly routine, he does. He doesn’t try anything when they lay back-to-back in bed. More importantly,

The Steins;Gate: My Darling’s Embrace Kurisu route is great. It’s funny, it is heartfelt, and it also happens to be extraordinarily easy to wind up on. (Don’t do anything, and you’ll be fine.) It really gives her a chance to play off of Rintaro, while still showing the signs that there really is genuine affection and respect between the two of them.

Steins;Gate: My Darling’s Embrace is available for the Nintendo Switch, PlayStation 4, and PC.