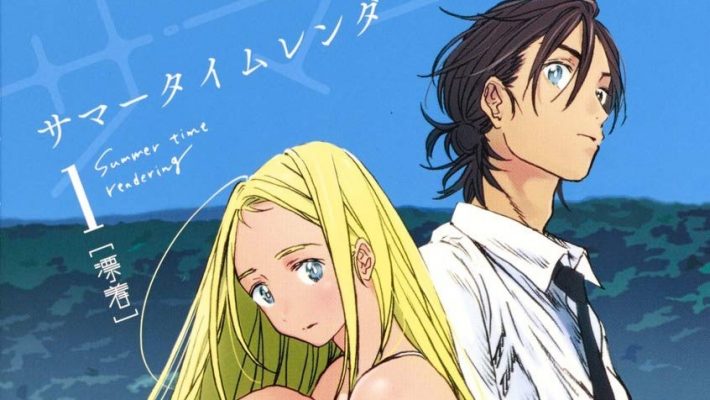 We’ve been seeing quite a few stories with mysteries to solve and secrets lately. The kinds of tales that get you wondering what a person could or should have done differently. For example, someone might wonder about that when playing a game like Gnosia. Summertime Rendering presents another situation that makes people wonder what exactly is happening. And, with Udon releasing its first three volumes at the end of May 2022 and last three in August 2022 and Disney+ showing the anime in Japan, it’s really an ideal time to dive in.

The Summertime Rendering manga begins with a mysterious encounter. A young man named Shinpei is on a boat with a friend named Ushio. After she chastises him for not coming home often enough, she offers advice about telling people hello, looking for her, and protecting someone named Mio. Only after that introduction does Shinpei “wake up.” It turns out he’s on a ferry heading to Hitogashima to attend Ushio’s funeral. It’s also then that Mio comes racing on her bike to meet him.

It’s then that Summertime Rendering gets not only Shinpei and Mio, but the reader, guessing what’s going on. The story is that Ushio died while saving a young girl who was drowning. However, Shinpei’s talks with people he grew up with and who were around at the time suggest something more could be going on. The town’s police officer seems to be investigating. Then, there’s the rumor about the Shadow Sickness. When Shinpei and Mio are talking about what happened to Ushio and the girl she saved, Mio brings up an encounter the child had. That’s when an elderly man brings up an illness that can affect people on the island.

It all comes in at such a steady pace. Summertime Rendering is setting up these little touch points. There are clues hinting about certain things to potentially expect. But then, the story still manages to surprise you with some twists. As an example, I didn’t expect the level of fanservice present in its introduction. For example, Ushio is in a swimsuit when we first meet her. When Shinpei encounters a mysterious woman on the ferry for the first time, he’s waking up face-first in her breasts. After Mio races to Shinpei to greet him, her bike can’t stop and we see her underwear. While it would be a spoiler to explain why I think it is appropriate in retrospect, all of this establishes a sort of tone. Which then make subsequent events feel like they hit harder.

Since we are starting to see stories with situations like this more frequently, it becomes about seeing not only what is going on in the Summertime Rendering manga. It is also about how Yasuki Tanaka will make it stand out among its contemporaries. The things that are happening here. The way it builds out. How Shinpei addresses situations and uses what he learns.

Not to mention, well, it’s appropriate because of the season. This is a mystery set in the summer. It’s on an island. There’s the whole ambiance of swimming, festivals, and small town life. Again, not to offer any spoilers, but Summertime Rendering tells the sort of story that could work at any time of year. But it feels especially effective now.

After going through the first volume of the Summertime Rendering, it really feels like the optimal time for this story to reach more people. The setting in-game, the appearance of its anime adaptation, and the fact that these sorts of tales are coming up more frequently really helps set the stage for it.

The first volume of Summertime Rendering will be published via Udon on May 31, 2022. The anime adaptation is streaming on Disney+ in Japan.