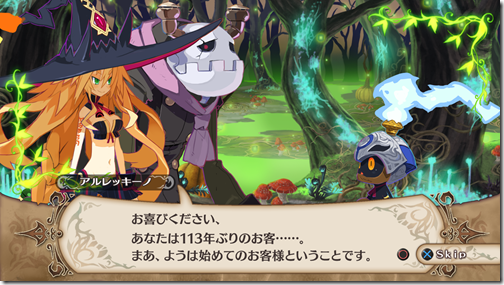 After The Hundred Knights makes his leap into the real world, The Witch and the Hundred Knights begins proper. You can view quite a bit of that in this 10-minute video, and read my recounting of the game’s tutorial chapter, so I’ll skip ahead to the boss encounter in the first chapter – Delacaterpillar.

At first, Delacaterpillar appears to be a friendly soul who offers to guide you to the Pillar of the Temperance nearby. The Hundred Knights is sent out by the Marsh Witch Metallica to destroy one of these to turn the area into a marsh.

The Delacaterpillar brings you to its lair and reveals that only the guardian of the Pillar of the Temperance can actually see it. Metallica is taken aback by the revelation, this is the first time she has heard about this. Delacaterpillar explains that the pillar will pick a guardian of its own as a self-defense mechanism. The guardian will be bestowed with great magical powers so it may swat away any busybodies that may come buzzing by to try and gain access to the pillar’s powers. 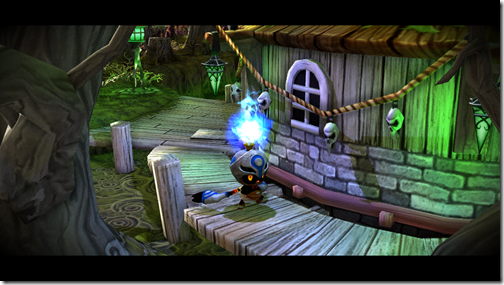 "Oh, watch your step. Be careful not to step on my babies," Delacaterpillar tells our ancient hero.

Metallica soon realizes that Delacaterpillar is nothing but a demented Pillar of the Temperance guardian who has taken so much joy in killing all passers-by who wish to lay claim to the pillar, that he calls his victims’ bones his babies. In the tutorial we saw that while Metallica may be a harsh witch, but deep down she possess a strong sense of justice. Just as she previously ordered The Hundred Knights to attack the grandmother who tried to devour her granddaughter, she orders you to take out the Delacaterpillar.

Boss fights in The Witch and the Hundred Knights are a little different than most other action RPGs. Although the basics are roughly the same, you will need to dodge the enemy’s attacks and wait for it to be in a vulnerable state so that you may retaliate a decisive offensive strike. 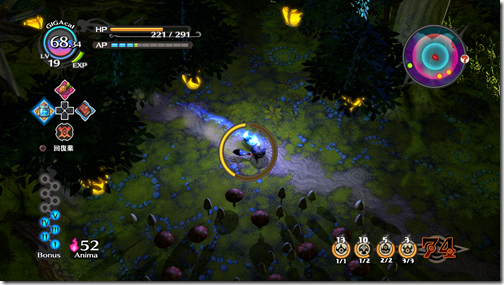 What’s interesting in The Witch and the Hundred Knights is that on top of the boss enemy’s health gauge, there is also a defense gauge that goes up and down depending on what actions it takes. Right after Delacaterpillar revs up and does his rolling attack there is a brief moment where he is at his most vulnerable, and a lot of this first boss fight has to do with dodging incoming attacks until you get a chance to strike at Delacaterpillar’s weak moment.

I’ve only played a little more than this first boss encounter, but it’s clear to me that the difficulty in The Witch and The Hundred Knights ramps up real quick. If you’re good at action games, you could definitely get through some of the harder challenges here faster. If not, the leveling and RPG systems can still bail you out.

The Witch and the Hundred Knights is out in stores now in Japan. An English version has been confirmed by NIS America, but has not been dated yet.