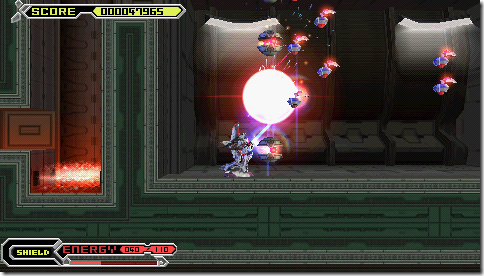 Thexder Neo can be described as a platformer + shoot-em-up lite. The lite part comes from neither side being very deep, but that’s not a bad thing. It makes the game ideal for short playing sessions.

Players can freely transform between an upright moving mech or a space ship. The mech part is good for precise platforming and shooting at nearby enemies while the ship part is necessary to speed through narrow passages and getting to higher places. 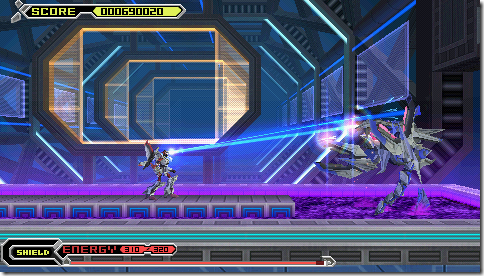 Shooting, in the game, is accomplished by pressing down one button and facing the enemy. As long as the enemy is close, the mech’s laser will lock on to it, even if it’s above the robot. In ship mode, the laser only shoots whatever is directly in front of the ship.

Lasers sap energy, so it may not be smart to go through the entire stage holding down the fire button. When the mech or ship gets damaged, energy is lost and once energy reaches 0, it’s game over. Players can also press a button to temporarily activate a shield which protects the ship from losing too much energy when damaged. The shield only lasts for a couple of seconds so it may be wise to save it for dire situations. 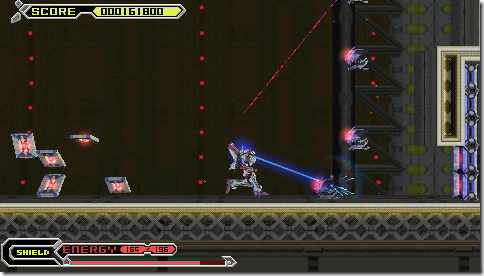 While it’s possible to speed through each stage quickly, there are enough nooks and crannies to explore to satiate more detail-oriented players. Some of these crannies include blast-able blocks which take finesse to destroy. Once destroyed, the blocks usually contain energy or energy upgrades. I found it rewarding to look for these blocks on each stage. It certainly made the game last longer.

Thexder Neo is a short game, which makes sense why it’s downloadable. Unfortunately, there’s not much replayability, so I have a hard time recommending it even if it’s only $10. It’s more of a game one would play through instead of thoroughly play.