Worms developer Team 17 has published Mouldy Toof Studio’s lighthearted prison break-out game The Escapists on Steam Early Access.  You can purchase it right now, for Windows only, at the “special Early Access price” of $9.99. The Escapists was successfully greenlit for publication on Steam within just 96 hours of its application last year. It also had a successful Kickstarter campaign in November 2013 during which it made over double the £3,000 goal.

The Escapists puts you inside an orange jumpsuit as an inmate of a federal prison. Your goal is simple: to escape. Except it’s not quite as straightforward as that makes out . You’ll have to do your best to plot and pull off a daring escape plan while working around the prison’s strict schedule.

Doing this involves improving your character’s statistics through activities such as regular workouts and boosting your intellect, but you’ll still need to ensure you attend roll call on time. You’re also able to craft weapons and tools such as shivs and and nunchucks from the items you find lying around. Stealing items from other inmates is also possible but if they catch you in the act they won’t let you go without a fight. You’ll also have to be wary of cell shakedowns as if the guards find any contraband you’ve stowed away then they’ll confiscate it immediately. 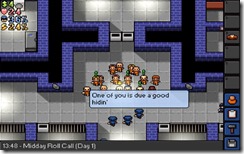 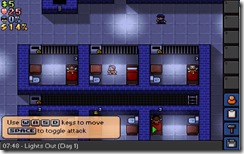 Other tasks available include performing “favour” quests for your fellow in-mates so that they help you execute your escape, or simply pay you for your service. You may prefer applying for a job working for the prison in order to make the money you need for those vital escape tools and supplies without all the danger attached. As you can tell, The Escapists provides you with an entire working prison to navigate with multiple escape routes available to discover and plan your big break-out around.

As The Escapists is currently in Early Access not all of the features are fully implemented at present. Future versions of the game will include a prison editor, different prison themes (such as a P.O.W. camp), and new items, weapons, escape routes, and more available save slots.

The Escapists will also be coming to Xbox One in 2015. You can visit game’s website here.