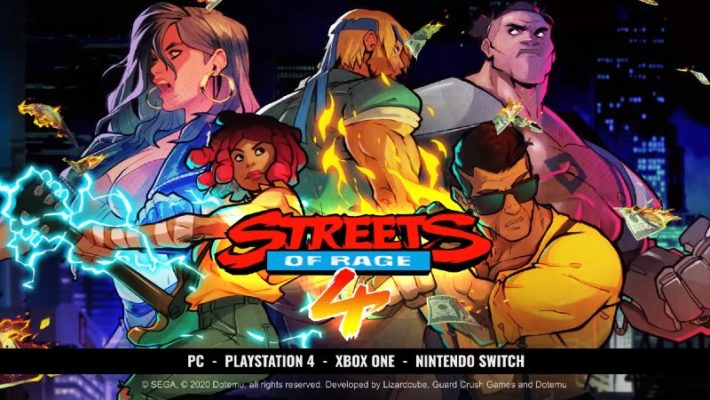 Many years after old Sega fans assumed that the series was dead in the water, Streets of Rage 4 brings back the classic beat ’em up series under new developers LizardCube and Guard Crush Games. It takes place years after the original Sega Genesis trilogy with an older Axel Stone, Blaze Fielding, and Adam Hunter, as well as the two newcomers Cherry Hunter and Floyd Iraia. While not much has been said regarding what incident prompts our heroes back into action, we can guarantee that they’ll be leaving a trail of bruised bodies in their wake. For Japan, Streets of Rage 4 will be available on PC via Steam, but does not have a confirmed release date for console versions.

Another interesting release this week on Japan’s Nintendo Switch eShop is Gnosia, a port of the late PlayStation Vita Werewolves-inspired game set in a futuristic sci-fi spaceship and winner of Famitsu Dengeki Game Awards’ Best Indie Game award. Fourteen inhabitants of the spaceship must come together and discuss who might actually be the shapeshifting Gnosia monsters in disguise, and the character who gets the most votes is sent into cold sleep. However, no matter if the humans win or lose, some power is sending them through a time loop where each time someone else could be the Gnosia in disguise. Apart from figuring out the Gnosia, the characters will need to find a way to break free of their chains once and for all.

Here are this week’s Japanese releases below:

Memories Off -Innocent Fille- for Dearest