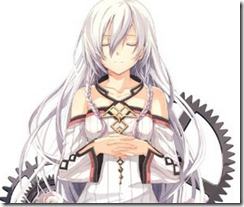 The main character in Trails of Nayuta is Nayuta Herschel, a curious 15 year old girl. She is a student in a school in a port town who goes on an adventure to solve one of the world’s mysteries. Dengeki PlayStation reports astronomy is her hobby and Kaori Mizuhashi (Laharl in Disgaea and Navi in The Legend of Zelda: Ocarina of Time) is her voice actress.

Noi, a fairy who has the mysterious Master Gear, is her partner and Signa, Nayuta’s childhood friend is an 18 year old sword master.

Trails of Nayuta takes place on a planet with a chain of islands and people believe the world is flat. The islands you can reach change depending on the season (spring, summer, fall, and winter), a feature leaked earlier by a retailer.

Unlike other Trails titles, Trails of Nayuta is an action RPG. Nayuta attacks with a sword, two handed sword or a mace. Players can press another button to use various skills. Noi travels with Nayuta and the other buttons are for her arts (magic) and Gear Craft attacks. Noi will learn new spells and Gear Craft techniques when she levels up. Falcom’s idea was to create a system where you can control two characters easily.

Trails of Nayuta has been in development for over two years and this game will push the limits of the PSP hardware in terms of graphics. Falcom chose to use 3D models and 2D animated scenes. While the other Trails games are connected to the Legend of Heroes series, Falcom says this title isn’t a part of that line and is a new work. For more about the game’s Four Season’s system check out this post.

Nayuta and Noi will travel together for the game.