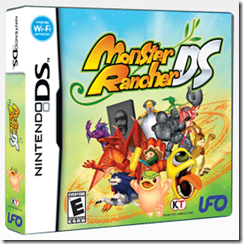 Monster Racers, a Koei title, and Monster Rancher DS developed by Tecmo are still coming out in North America. However, Tecmo Koei won’t be publishing them. UFO Interactive is handling both Nintendo DS “monster” games.

News about the partnership first came out when UFO Interactive announced Monster Racers, which is set for summer. We confirmed with the Tecmo side of Tecmo Koei that UFO Interactive is also taking care of Monster Rancher DS. Originally, the game was set for a spring release.

This partnership frees up some of Tecmo Koei’s manpower. Perhaps, enough for them to work on another game like Fist of North Star which has already been confirmed for Europe.